Accessibility links
Jonathan Winters Reflects On A Lifetime Of Laughs From television to telephone answering machines, comedian Jonathan Winters has been making comedy for over 60 years in just about every medium. NPR's Pat Dowell remembers Winters' career as his latest film, The Smurfs, hits theaters.

Listen
Jonathan Winters Reflects On A Lifetime Of Laughs

Jonathan Winters Reflects On A Lifetime Of Laughs 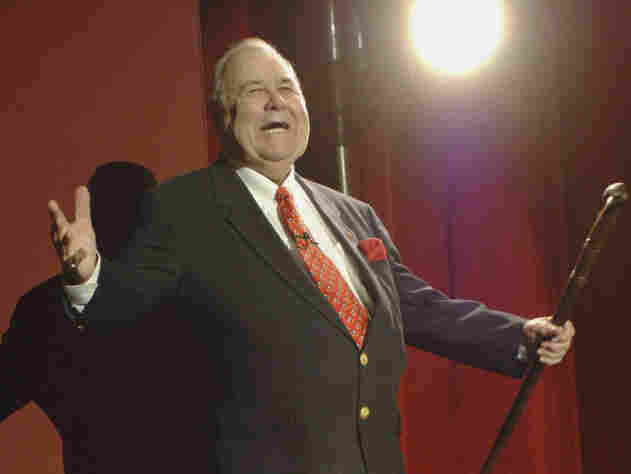 Jonathan Winters' entertainment career began when his wife encouraged him to enter a local talent contest in his hometown of Dayton, Ohio. He ended up winning the contest — along with a wrist watch and a job as a local radio DJ. Stephen Shugerman/Getty Images hide caption 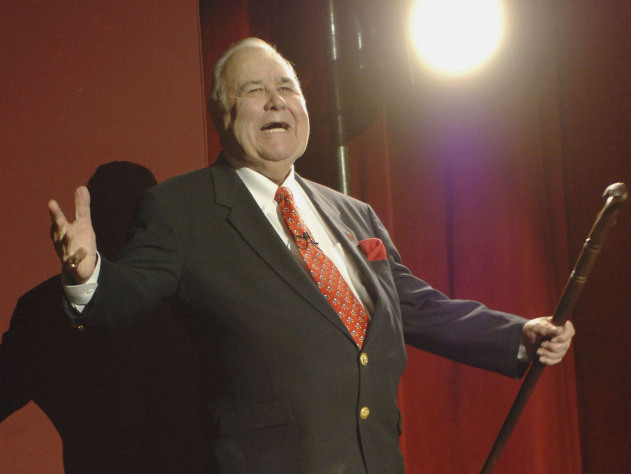 Jonathan Winters' entertainment career began when his wife encouraged him to enter a local talent contest in his hometown of Dayton, Ohio. He ended up winning the contest — along with a wrist watch and a job as a local radio DJ.

The recent Smurfs movie has the distinction of casting one of America's most admired of comedians. He's Jonathan Winters and he gives voice to Papa Smurf in the new film, but he also voiced Grandpa Smurf in the 1980s TV cartoon series.

Winters has practiced comedy for over 60 years in just about every medium you can make people laugh in — on the radio, on television, in nightclubs, on recordings, in movies and even on telephone answering machines (ask your parents).

His album Crank Calls won him a Grammy in 1995 and he's won two Emmys for his sitcom appearances. In fact, Jonathan Winters is a favorite among many comics — so much so that in 1999 the Kennedy Center awarded him its second Mark Twain Prize for American Humor.

The Birth Of A 'Wacky Genius'

"I have always classified [myself] as an actor/comedian, a humorist," he says. "I started out as an artist and what I do is verbal paintings. I paint a picture. Hopefully you'll see the characters and what they're doing and what they're saying."

Take the proprietor of the Used Pet Shop, a character from Winters' 1960 comedy album The Wonderful World of Jonathan Winters. In the album, Winters introduces the proprietor in one of his patented rural voices — thick with the Ohio countryside — as an apocryphal uncle who offered customers a real deal.

"I can give you that kangaroo over there for 10-and-a-half," Winters has the uncle say. "Come all the way from Australia, as most of them do. I got him as far as Muncie but he fell off a flatcar and broke his tail. You know, most of them set back on their tails like this. But this one, you have to lean against something."

There's a sense of danger in the idea of slightly imperfect bargain animals, and that danger is present in many of Winters' routines. According to him, that's the way it should be.

"I am dangerous," he growls with pride.

Winters found a natural home on shows where the hosts were also drawn to danger — the danger of live comedy and improvisation. He often appeared on Steve Allen and Jack Paar's innovative programs in the in the 1950s and '60s.

In one particularly famous appearance, Jack Paar hands Winters a stick about 3 feet long and tells him to make comedy. Winters looks at if for just an instant, then whips it out in front of him, making a casting reel sound — he was always gifted at sound effects. In a comfortable vacationer's voice, he says, "Well, that was a pretty good cast, wasn't it Bob? I think we're on to something."

Then, a look of alarm out into the distance. "I'm sorry, Margaret, try to swim in."

The studio audience roars, which must have given Winters a clue for the next stick bit — a lion tamer's whip complete, again, with sound effects. Then the stick becomes a teacher's pointer, a spear, a golf club and a dozen more props.

The quicksilver improvisations, countless characters and mercurial changes of mood and expression led people to dub Winters a "wacky genius."

The Roots Of Winters' Comedy

Winters says he often drew on his Ohio childhood for characters. He says he was often lonely and his parents either ignored him or belittled him, even after his success.

Still, he brought his mother — a radio professional herself — onto The Jack Paar Show, one of the biggest TV shows at the time, thinking she would get a kick out of it.

"Jack said, 'You got a hell of a talent here,'" Winters recalls. "'You must be very proud of him.' And my mother said, 'He's the biggest joke I ever wrote.'"

His emotionless retelling of the story makes it clear he didn't see it as good-natured teasing. He adds, "They were both insanely jealous of my career."

Winters' voice betrays a bitterness that has grown with the years — it's especially noticeable when you hear the way Winters has talked about his parents in previous interviews. But he always says he's "not a cry-baby," and he had the satisfaction of a happy marriage that lasted from 1948 until his wife's death in 2009.

At the height of his success, in his early 30s, Jonathan Winters voluntarily committed himself to a private psychiatric hospital.

"At that time they didn't have a label for me. I said, 'What the devil, I know I'm not schizophrenic; I'm not catatonic," Winters remembers.

So he asked for a diagnosis. He repeats the doctor's answer in a coy tone: "It would only upset you." Winters replied, "I'll tell you what's upsetting me is the cost of this place."

Now he knows his diagnosis was bipolar disorder, but there were no effective medications for it back then. Winters says he declined the electroshock treatment that doctors said would erase some of the pain he was feeling.

"I need that pain — whatever it is — to call upon it from time to time, no matter how bad it was," he says.

He recalls joking pointedly with his doctor about keeping in touch with the demolition experts he'd served with in World War II.

The doctor, puzzled, would ask, "What's the story?"

"They would visit you," Winters would say, again solemnly.

"They would visit me?" The doctor would ask, still puzzled.

Then, the kicker: "Yeah, there'd be just the one visit."

It sounds like the kind of joke that might prolong your stay in an institution. Winters left the hospital after eight months.

Naturally, he used his breakdown in his comedy thereafter, recalling on his next comedy album that he "left the mother ship, and they caught me. That was a terrible thing. But I had fun, playing checkers all day and making rope-soled shoes, and everything. Crazy!"

Winters says the day he came home from the hospital, April 1, he got a call from producer/director Stanley Kramer offering him a role in the slapstick saga It's a Mad, Mad, Mad, Mad World.

Winters didn't think he was up to it, but he turned to his wife for advice before turning Kramer down. "Take it or you'll never work again," he recalls her saying. So, he did.

A Look At Winters' 'Playground'

Winters' best films are products of the 1960s. They include the dark satire The Loved One, in which he plays two venal twins; one runs a funeral home for people, the other runs one for pets and together they hit on a scheme to launch the departed into orbit.

So far, Winters has spent most of his career working in television. He had two of his own TV comedy and variety shows — one in the '60s and one in the '70s — and he frequently appeared in sitcoms. 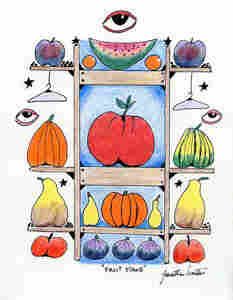 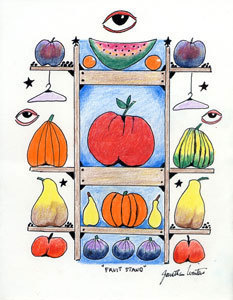 In Mork & Mindy in the 1980s, he famously played Robin Williams' extraterrestrial baby. Working together, the two became great friends. Williams' own manic style of rapid-fire improvisation seems to have been inspired by Winters, who says he was most influenced as a young comic by classic actor/comedians like Laurel and Hardy and the Marx Brothers. When you hear and see Winters perform, however, it's always seemed as though he sprang wholly original from some alternate universe.

Winters continues to create recordings, comedy and otherwise. In a surprising departure, a recent one — A Very Special Time -- features his readings of popular and often sentimental poetry and prose.

At 85, Winters says what gives him the most pleasure now is selling his colored-pencil drawings — surreal sketches that always include eyes and sometimes coat hangers, fruit or stylized creatures. But he's also written the script for a dramatic Western, in which he hopes to play a role, and he's working on his autobiography.

"I chose this title I think works," he says in a voice that has become a sepulchral rumble, but is still graced with expert timing. "It's me. And the title of the book, of the autobiography, is In Search of a Playground."