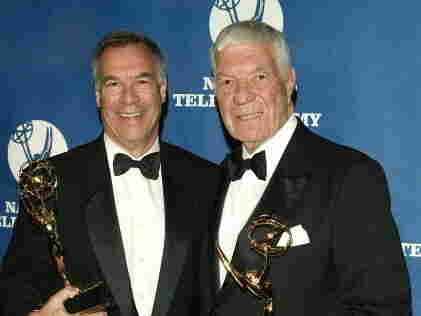 Next week, the Pro Football Hall of Fame in Canton, Ohio, will welcome its newest inductees, and among them is the man who helped turn football into an art form and the NFL into the most watched professional sports league in the nation.

The Hall of Fame's Joe Horrigan remembers football before Sabol as black-and-white footage overlaid with dull commentary. Sabol made it a vibrant drama, more like opera or ballet.

Through his lens, athletes would reach for a ball in slow motion, knees flying high as they ran through the line of scrimmage, Horrigan says. "The ball spiraling through the air — that was something that became a trademark."

That technique was Sabol's vision. His small company first filmed the NFL championship in 1962. Two years later, the NFL bought the company and renamed it NFL Films. Sabol then began recording every game and producing highlight movies marked by dramatic music, narration and close-up shots.

One of Sabol's first producers, Bob Ryan, says Sabol told the crew to film everything that moved.

"You saw the eyes, you saw the hands, you saw the feet. We took people places they had never been through our camerawork and our soundwork," Ryan says.

Those people included fans like Sterling Wheeler, a visitor to the Hall of Fame in Canton. Wheeler says that as a wild-eyed, eager kid from the "'hood," he idolized Sabol and his crew.

"Because see, we didn't have tickets. So through the films, it brought football into a whole new spotlight," Wheeler says.

Even the narration of Sabol's films had a Hollywood flair with the so-called "Voice of God," Philadelphia newscaster John Facenda. Sabol's distinctive sound even extended to the sidelines when NFL Films put microphones on the players and coaches for the first time.

At 94, Sabol is now hard of hearing and doesn't give interviews. His legend-making films, however, will speak for his vision for years to come — a thousand miles of his films are currently stored at NFL Films' studios in Mount Laurel, N.J.