Accessibility links
Reliving D-Day, With Paintballs And Referees Every year, thousands converge on Jim Thorpe, Pa., with paintball guns for the largest re-enactment of the Normandy invasion. The game is loosely based on Capture the Flag, and the winner isn't predetermined. 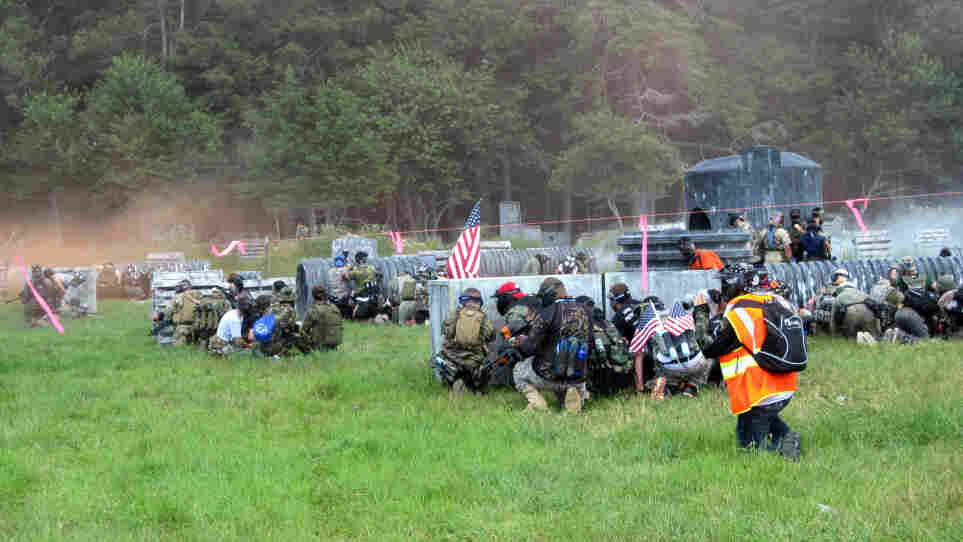 Members of the Allied team take cover on the "beach" — the field that faces the tree line where the Axis team has embedded. Thousands of people traveled to a field in Jim Thorpe, Pa., to re-enact one of the most famous battles in history using paintball guns instead of real ammo. Rob Sachs for NPR hide caption

Thousands of people traveled to a field near Jim Thorpe, Pa., in July to re-create one of the most famous battles in history: D-Day, the invasion of Normandy. But with live ammunition — paintballs — and no predetermined winner, it wasn't a typical re-enactment.

In the paintball world, the invasion of Normandy isn't just an event, it's the event.

"This is our Super Bowl," says Nicky Angel Valor.

Angel Valor was playing a general for the Allied forces. She helped re-create the 1944 Allied invasion by adding touches to make it historically accurate, like using the names of French towns on the playing field: Ste. Marie Outre L'Eau, Ste. Mere Eglise, Pointe du Hoc, and others. 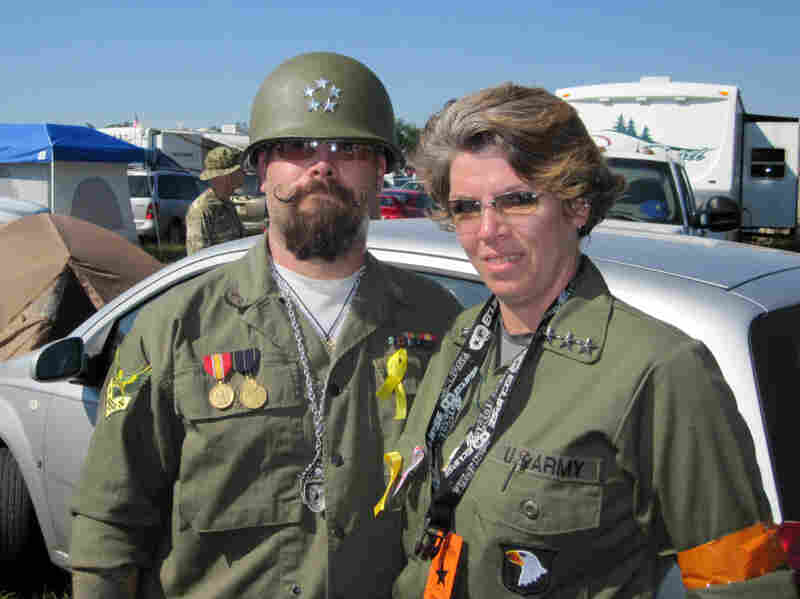 Allied Gen. John Holme, aka "Mad Kow" (left), and Nicky Angel Valor are seen at the "Invasion of Normandy" paintball battle — the largest event of its kind in the world. "This is our Superbowl," Valor says. Rob Sachs for NPR hide caption 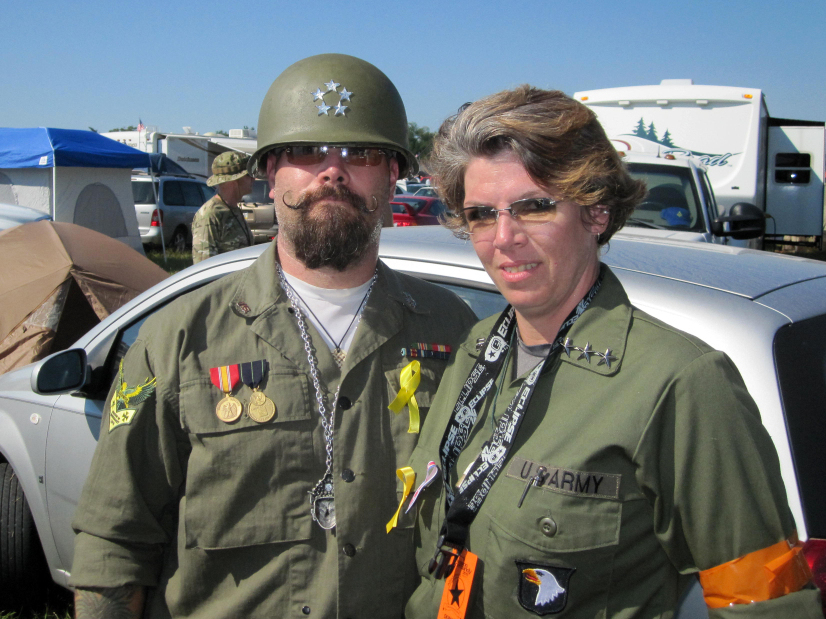 Allied Gen. John Holme, aka "Mad Kow" (left), and Nicky Angel Valor are seen at the "Invasion of Normandy" paintball battle — the largest event of its kind in the world. "This is our Superbowl," Valor says.

There's no real beach in the Pennsylvania field, so life-sized wooden boats are spaced out on the field facing a tree line where the Axis players are embedded. Allied players cram into the boats to start the game. When the countdown begins, referees use a rope to drop the boat's wood doors.

"It's the ultimate adrenaline rush," Angel Valor says. "One of the most amazing things is being on this beach when the horn goes off and there are 4,000 guns shooting at one time."

"A lot of people are going to come here and they're going to expect a re-enactment, but I think there's a lot of components about this that really don't make this a war re-enactment at all," Holme says.

But at first glance it looks pretty convincing. Plumes of orange smoke bellow from smoke bombs. Players call out to each other over walkie-talkies, while referees continue to load the Allied forces into the boats and send them into battle.

The illusion fades quickly when you notice the guy dressed up as Darth Vader shooting off paintballs from behind a tree, or the bagpiper haphazardly waltzing through the field.

The majority of the players are in military fatigues. Many of the participants are veterans, some are active duty. A few others, like Rich Gall from Kirkwood, N.Y., are history buffs.

But some participants take things past limits. Skirmish USA, the owner of the field, bans Nazi paraphernalia, but that didn't stop Nick "Woodog" Woodrum, who drove up from West Virginia. Woodrum shaved the Nazi SS insignia onto one side of his head and a swastika on the other.

'Rules Of Engagement' For Paintball D-Day

In this year's re-enactment of the battle, Allied forces beat Axis troops 124-95 in a game that's loosely based on Capture the Flag.

"It's all character, it's all fun and games, no hate," Woodrum says.

Earlier he had a swastika flag flying over his tent site, but was asked to take it down.

"[I did it] out of respect ... but it's like having a Civil War re-enactment without the Confederate flags, it don't make no sense," he says.

Armintrout goes by the name "Ninja." He says the overwhelming majority of people in the re-enactment are friendly and respectful. Angel Valor agrees. She wears a vial of sand from Omaha Beach around her neck.

"This reminds us that what we're doing is pretty much nothing. We're having fun with this, but we're not going through what these men faced when they truly stormed the beaches, and we are grateful for what they've done," she says.

Watching the fake invasion from the sidelines are two real-life soldiers, Sgt. 1st Class Dustin Miller and Staff Sgt. Derrick Lewis. They're from a nearby Army recruiting center. Both have served two tours in Iraq.

"We look at it as respect and support, and if you want to play it, by all means have at it," Lewis says.

This year the Allied forces won the battle 124-95, but they can't rest too long. Both sides are already plotting their strategy for next year.