Accessibility links
Protests In Israel Target High Housing Costs It began with one woman pitching a tent to object to the high cost of rent. Now it's a nationwide movement. Demonstrators say the average wage in Israel isn't keeping up with skyrocketing housing prices. 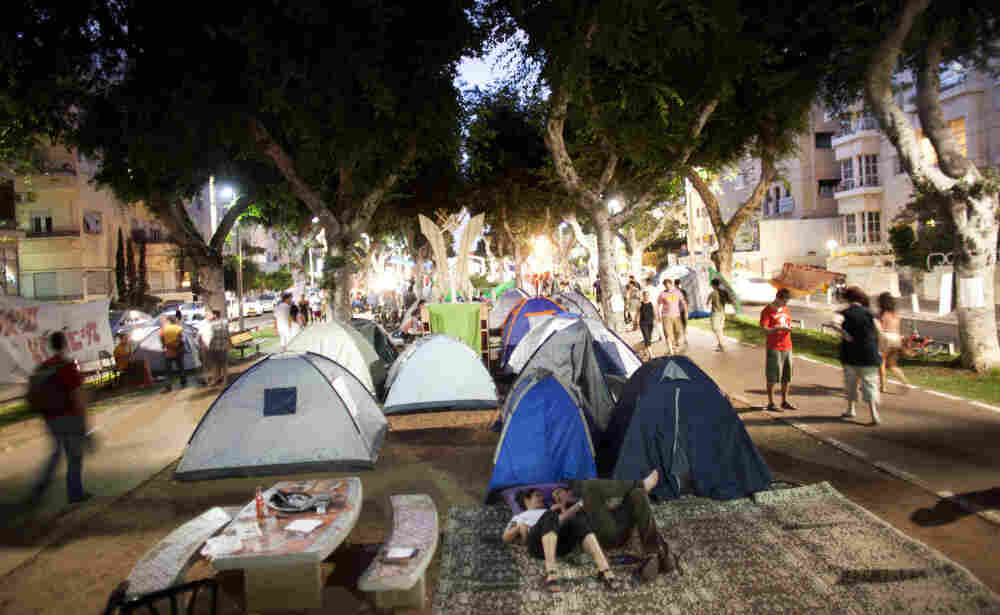 A tent camp has been set up on the promenade that lines Rothschild Boulevard, one of Tel Aviv's most expensive residential streets. Uriel Sinai/Getty Images hide caption 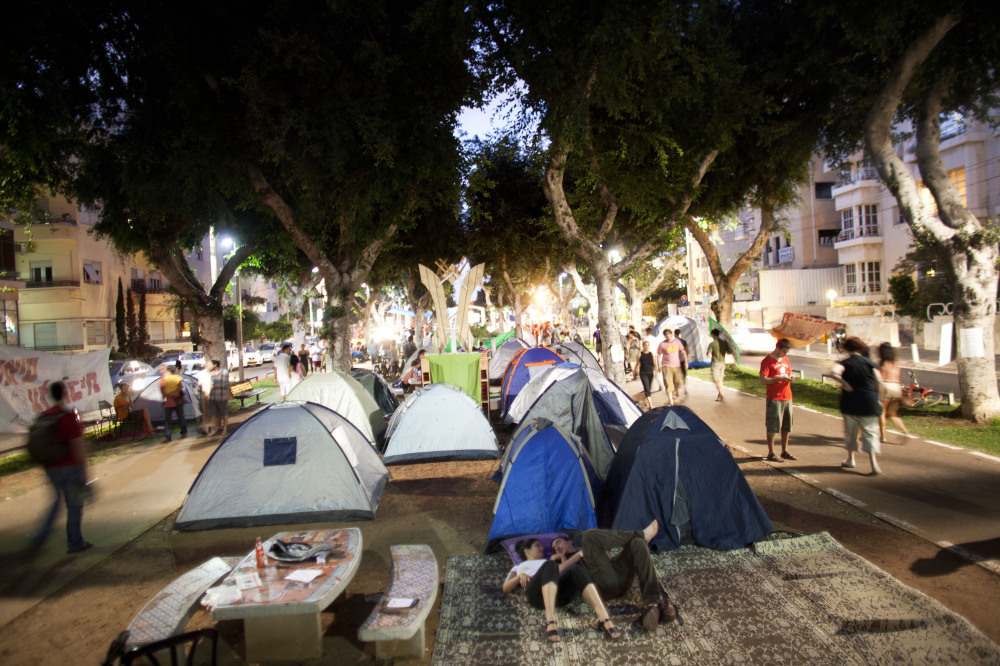 A tent camp has been set up on the promenade that lines Rothschild Boulevard, one of Tel Aviv's most expensive residential streets.

Domestic protests have dominated the headlines in Israel in recent weeks, as strikes over the high cost of living have spread across the country. But while the local media have termed it Israel's own Arab Spring, the protesters say they are far from calling for revolution.

Protester Amichai Greer has slept in a tent on the promenade that lines Rothschild Boulevard, one of Tel Aviv's most expensive residential streets, since July 16. On either side of his tent are picturesque Bauhaus buildings that house some of Israel's most elite families. It's not a bad view to wake up to in the mornings, says Greer.

The demonstration started with one young woman pitching a tent to protest the high cost of rent in Tel Aviv. Now, several hundred tents crowd the boulevard. Similar protests have sprung up across the country, with tent cities in more than a dozen places.

Greer says it's the kind of protest any Israeli citizen can get behind.

"All over the country people can relate to it," he says. "It doesn't mater if you are from the right wing or from the left wing."

A Change In Affordable Housing

The broad appeal of the protest was evident Saturday night, when more than 30,000 Israelis marched through the streets of Tel Aviv calling for affordable housing. It was the largest domestic protest the country has seen in several years.

Bezalel Aloni came to the protest with his children and grandchildren. Aloni, who describes himself as well into his 60s, said he was appalled at the lack of housing assistance provided to younger generations.

"When we were a young couple, we could easily afford an apartment. The state helped pay for most of it for us," Aloni says. "But quickly, this country has changed."

When we were a young couple, we could easily afford an apartment. The state helped pay for most of it for us. But quickly, this country has changed.

Bezalel Aloni, who came to the protests with his grandchildren

Those programs, however, have slowly disappeared. According to statistics published in Israel's largest newspaper, Yediot Ahronot, the price of housing in Israel has risen 60 percent in the last four years. The newspaper said that young people are now spending up to half of their salaries on housing.

Aloni says part of the problem is that the average wage in Israel hasn't kept up with the skyrocketing housing prices.

"Our oldest son lives in the U.S. and he doesn't have this problem. There is more logic and sense in the salary he makes and the cost of his house," Aloni says.

The protesters say they want assistance, not charity, from the government. Some, like 25-year-old student Shai Triliani, are calling on Prime Minister Benjamin Netanyahu to resign.

"All he wants is to keep his office. Bibi doesn't care about anything else," he says. "He should leave office just like all those other leaders in the Middle East that were forced out. That or we will force him out and into early elections."

Since the start of the summer, there have been protests over half a dozen different domestic issues in various parts of Israel. The Hebrew press has compared the situation to the upheavals of the Arab Spring.

Many of the protesters say it is a romantic comparison, but not accurate.

From the tent city in Tel Aviv, Greer says the movement is more like the anti-austerity protests in Europe than the revolutions of the Arab Spring.

"I can compare it to what happened in Europe mainly, because after all it's a democratic country," he says. "It's a part revolution, let's say — because we can go out and we can vote, we have rights, but we don't have social rights."

And Greer adds that in many cases, the protests have already brought about positive change.

Israel's leading dairy producers lowered the price of cottage cheese, a staple food in the country, by 25 percent after a series of protests. Striking doctors and social workers are holding regular meetings with the finance and health ministries to try and resolve their concerns.

And Netanyahu has promised to put forward a series of measures to reduce housing costs.