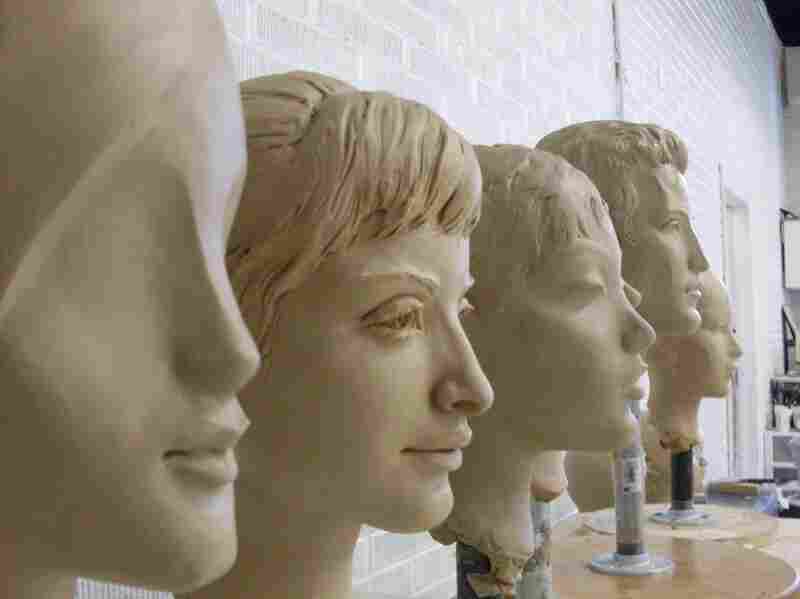 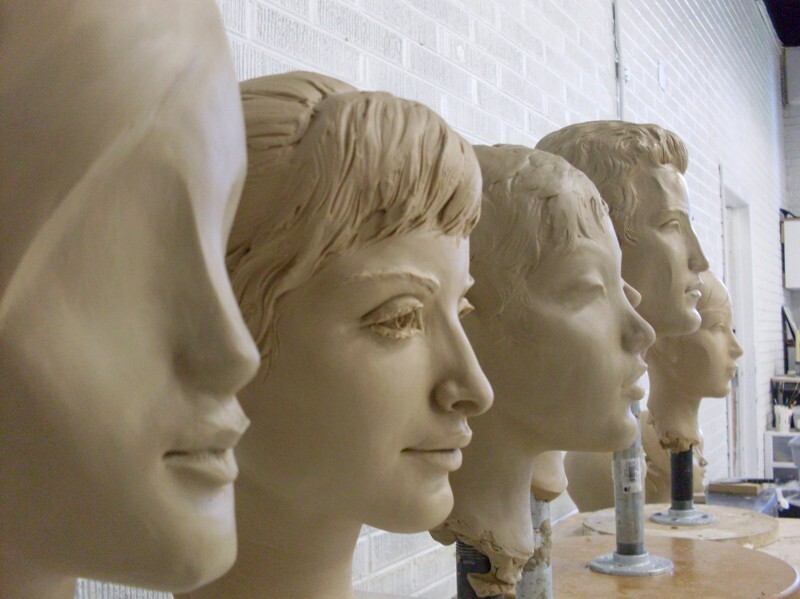 These sculpted clay heads reflect the variety of realistic and abstract designs in today's mannequins.

A mannequin maker in Colorado is helping retailers boost clothing sales by creating more life-like models. These are custom-made mannequins that look like the real people who shop in stores — or the way shoppers imagine themselves.

In a Disney Store in Southern California, an employee helps a young customer wave a purple wand at a talking mirror. It's part of the store's redesign, which includes playful child-size mannequins that encourage shoppers to interact with the merchandise. The mannequins appear to curtsy and jump after balloons.

The idea behind the new mannequins is to show children in real and imaginary play poses. Jeff Zimmerman, Disney Store's West Coast regional manager, stands near a plastic white castle. On top is a mannequin sitting cross-legged, wearing a blue Cinderella dress.

"[The mannequins] kind of evoke a sense of imagination of your child, maybe wearing that dress, and what else to explore in this particular neighborhood," Zimmerman says.

The 32 redesigned Disney Stores are calling their sales very strong for swimsuits and costumes shown on these mannequins. The company believes the displays played a role in that success. 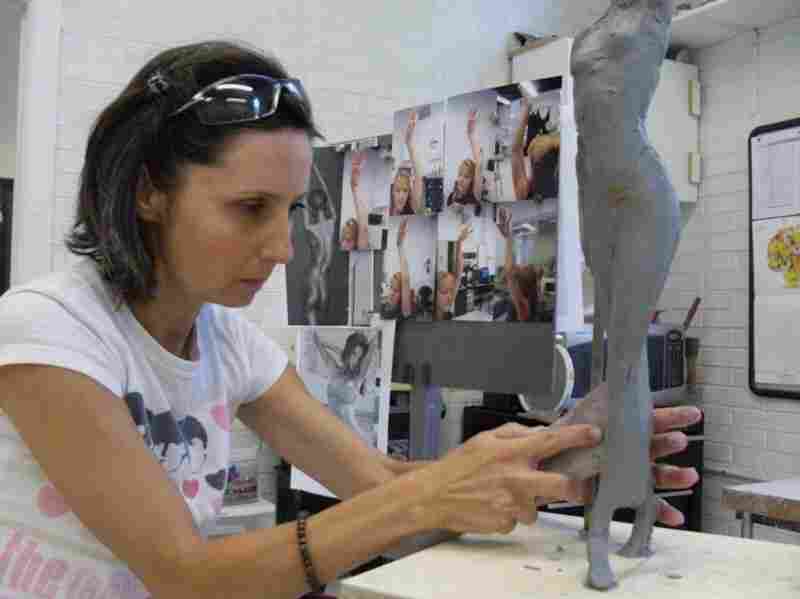 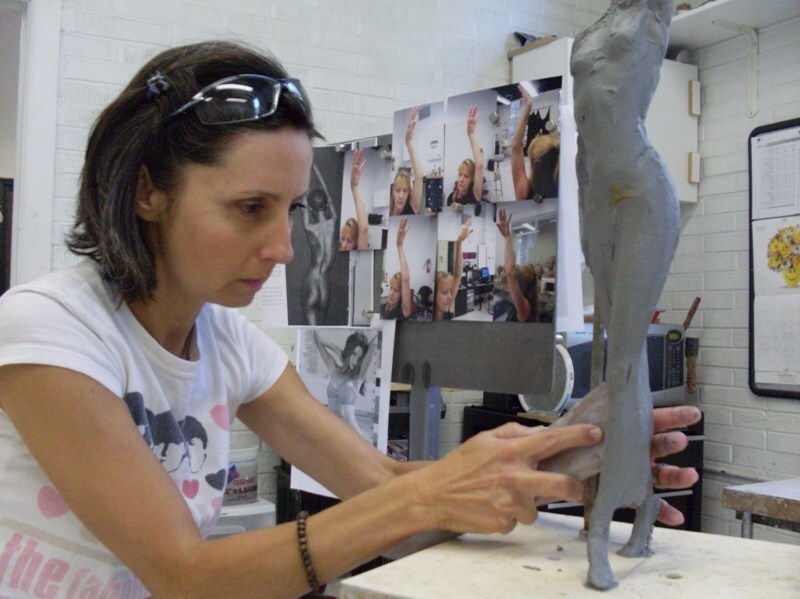 Outside of Denver, sculptor Ileana Barbu is carving a two-foot clay sculpture — one of the first stages in creating a custom mannequin prototype.

Next to her, gray limbs hang from a so-called "arm caddy." In fact she's surrounded by life-size body parts.

"I have a bunch of heads like those ones, like my colleagues have worked on, too," she says.

Each design coming out of this studio meets the needs of specific retailers. Peter Huston, who manages this brand for Fusion, says mannequins can change dramatically depending on what they're selling.

"That's why, for Guess Accessories, a tall, sleek mannequin, that has actually the detail removed, but gives you these beautiful fluid lines to accentuate accessories, is a very appropriate and unique use of mannequins," Huston says.

But, the needs of Guess are very different from those of Dick's Sporting Goods, which recently updated its mannequins to have more chiseled muscles and athletic poses.

The price of creating a custom prototype can run companies from $12,000 to $24,000. Mass production for Fusion mannequins can run up to $550 each. By contrast, an everyday mannequin can cost as little as $150.

The custom mannequin process can be expensive and painstaking. The molds are attached to a platter the size of a satellite dish. While it rotates, they're filled with a polyurethane substance. After the material dries, workers open up the mold like a cello case. 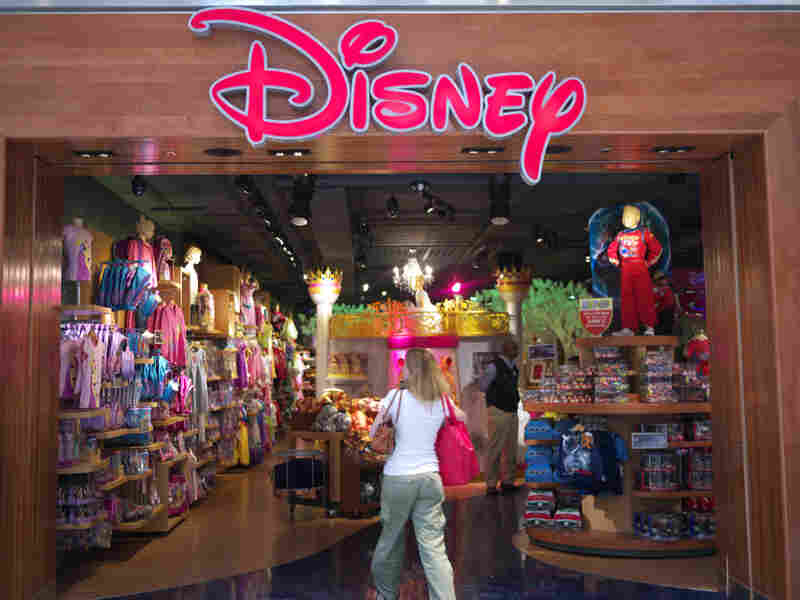 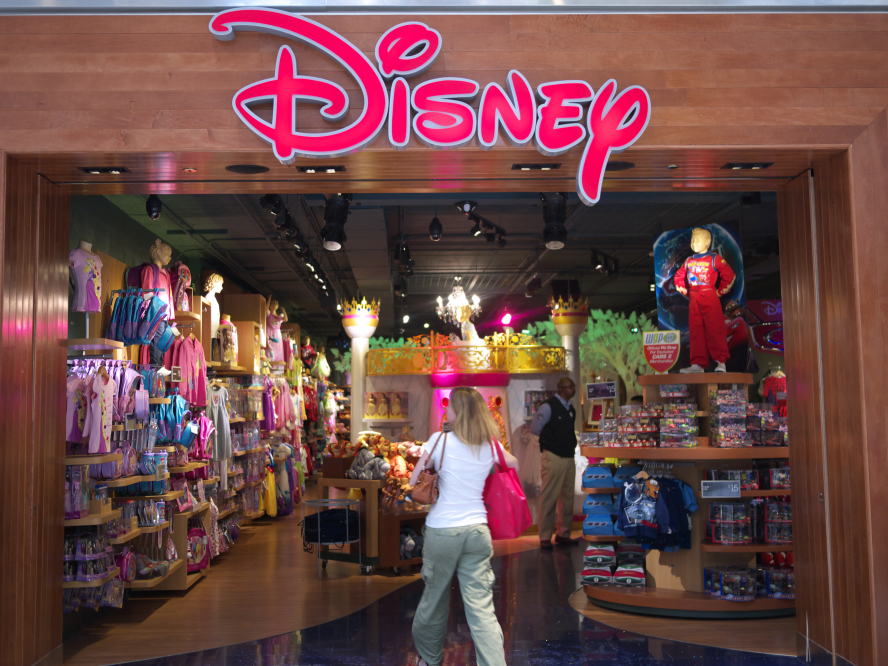 Disney is introducing "active" mannequins in 32 of its redesigned stores.

The mannequins are sanded and prepped it for the next stage: paint.

There's a reason why retailers are willing to invest so much money into such a complicated process.

"As online shopping grows and grows, it seems that people coming into the stores are even more and more interested in a tactile experience," says Craig Childress. He works for Envirosell, a New York City-based firm that studies consumer behavior. He says a well-designed mannequin will invite shoppers to interact with the merchandise.

"It's really amazing to us how static retail environments are," Childress says. "So anything that actually has perception of moving, or is actually moving, really gets attention very quickly."

While it may start with action, a successful mannequin has to ultimately reflect something that customers want to see in themselves, according to Fusion Specialties' Peter Huston.

"A well-designed mannequin will always be far more aspirational than it is realistic. And so you walk a fine line there," Huston says.

Retailers hope that's a line that will lead customers right to the cash register.