Accessibility links
House Passes Debt-Ceiling Increase The vote was 269-161. House leaders portrayed it as a far-from-perfect first step in changing Washington's attitude about the national debt. A final Senate sign-off for the measure is virtually assured on Tuesday. 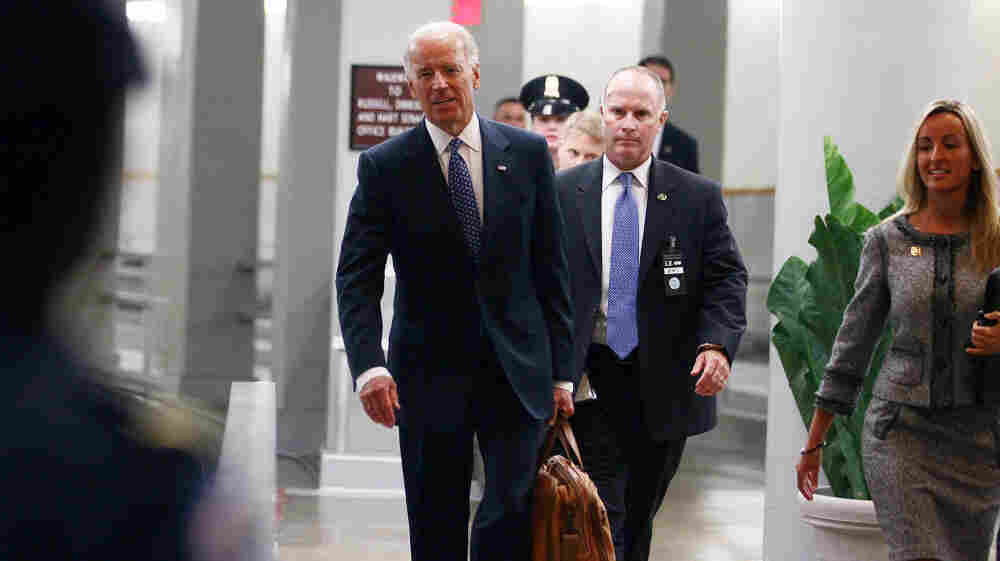 Vice President Biden walks through the Senate Subway on his way to meetings at the U.S. Capitol on Monday. Mark Wilson/Getty Images hide caption 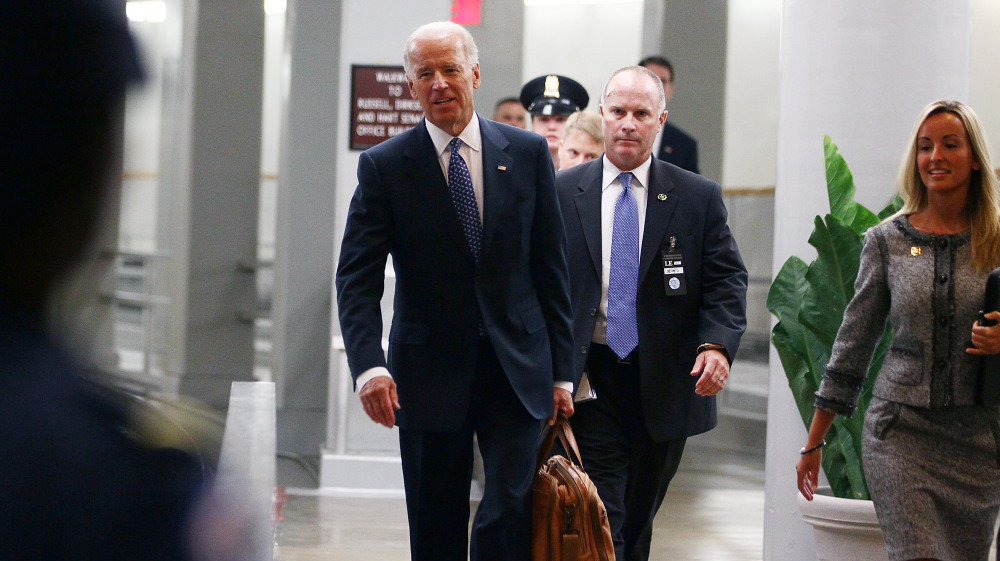 Vice President Biden walks through the Senate Subway on his way to meetings at the U.S. Capitol on Monday.

The House of Representatives voted Monday on a deal to raise the government's debt ceiling and prevent a first-ever U.S. default. The vote was 269-161.

The dramatic vote was made all the more memorable by Rep. Gabrielle Giffords' first appearance in Congress since suffering a head wound in a shooting six months ago. Giffords drew thunderous applause as she walked into the House chamber and cast her vote in favor of the bill.

Passage in the Senate was seen as nearly certain. The upper chamber was slated to vote on it at noon Tuesday, just hours before the midnight deadline for lifting the $14.3 trillion cap U.S. borrowing.

"If the bill were presented to the president, he would sign it," the White House said.

After months of fiercely partisan struggle, the House's top Republican and Democratic leaders swung behind the bill, ratifying a deal sealed Sunday night with a phone call from House Speaker John Boehner to President Obama.

"The legislation will solve this debt crisis and help get the American people back to work," Boehner said at a news conference before the vote.

But the tension on Capitol Hill remained clear before the vote. Boehner (R-OH) did not answer a question about whether he had the votes needed to push the measure through the House. And about a dozen protesters were removed from the House spectators' gallery after causing a disturbance while the measure was being debated.

"My goal is to get this bill passed, signed into law, solve this debt crisis and get the American people back to work," Boehner said.

The agreement, reached late Sunday night after a tense weekend of bargaining, gained momentum in the Senate after months of partisan rancor. A member of the Republican leadership predicted it would win at least 30 GOP votes.

"Maybe 35 will support it in the end. There will be some who will pull back," Sen. Mike Crapo of Idaho, the deputy Republican whip, told reporters.

Vice President Joe Biden, who played an instrumental role in the weekend efforts to hammer out an accord, also was on Capitol Hill to sell the plan to Senate Democrats.

But while Senate passage seemed likely, if not wholly assured, the House was far from a lock.

President Obama sent a video to Congress aimed at selling Democrats on the debt-ceiling agreement. "This has been a long and messy process," he said. "As with any compromise, the outcome is far from satisfying."

Tuesday is the deadline to avoid a U.S. default on payments to investors in Treasury bonds, recipients of Social Security pension checks, those relying on military veterans' benefits and businesses that do work for the government.

The deal would keep the country from defaulting on its loan obligations and possibly prevent a downgrade of its triple-A credit rating.

The legislation mixes a record increase in the government's borrowing cap with more than $2 trillion in spending cuts: $900 billion already locked in over the next decade and additional reductions of $1.5 trillion to be found by a bipartisan committee before the end of November.

If the panel fails to identify enough cuts or Congress fails to act the recommendations, across-the-board reductions would automatically take effect in January 2013. Boehner said entitlements such as Social Security, Medicaid and food stamps would be exempt from the automatic cuts but that Medicare would not.

The legislation also permits the nation's $14.3 trillion borrowing cap to rise by up to $2.4 trillion, enough to keep the government afloat through the 2012 elections. That's a key objective for Obama, whose poll numbers have sagged as the summertime crisis has dragged on.

News of the deal boosted some international markets, which have been weighed down by concern over the future of the world's largest economy. But the relief was short-lived after a downbeat survey stoked fears that the U.S. may be sliding back into recession.

Asian indexes closed higher, but European markets shed early gains to end the session in negative territory. On Wall Street, where markets got hammered over the past week, the Dow Jones industrial average and the broader Standard & Poor's 500 index were down in early afternoon trading.

In Washington, no one seemed completely happy with Sunday's compromise.

"It isn't the greatest deal in the world, but it shows how much we've changed the terms of the debate in this town," Boehner said on a conference call, according to GOP officials.

In a written statement, House Democratic leader Nancy Pelosi (D-CA) said only that she "[looked] forward to reviewing the legislation with my caucus to see what level of support we can provide." Despite the tepid response, Democratic officials said she was unlikely to do anything to try to scuttle the package.

Even the president admitted that the deal wasn't the one he would have preferred.

Still, Obama said it makes "a serious down payment on the deficit reduction we need and gives each party a strong incentive to get a balanced plan done before the end of the year."

With reporting from David Welna and Don Gonyea in Washington, D.C., and Frank Langfitt in Tokyo. Material from The Associated Press was used in this story.