Accessibility links
Military Dogs Enjoy Brighter Future After Service Military working dogs were once euthanized when their service days were over. Today, military and civilian families pressure the Defense Department to make it easier for handlers to adopt their canine colleagues. 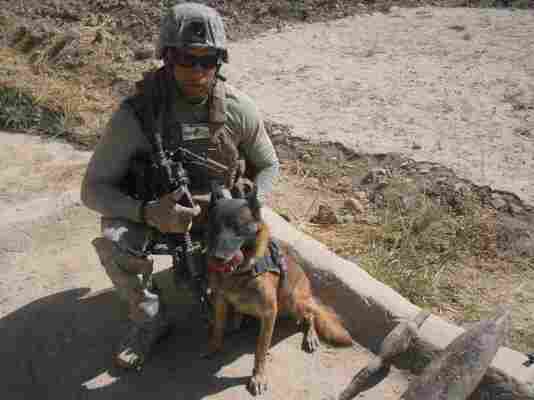 Marine Cpl. Daniel Cornier and his colleague, Chaak, in Afghanistan. "Pretty much trust him with my life," Cornier says. Courtesy of Daniel Cornier hide caption 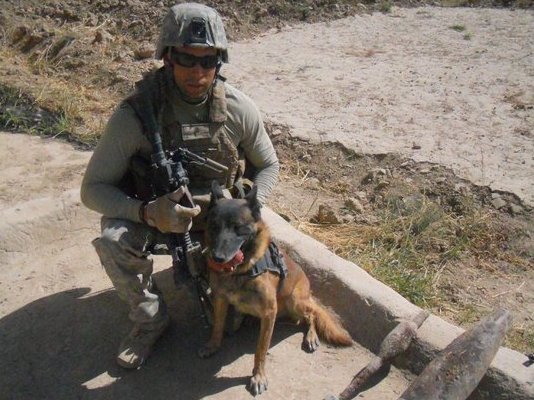 Marine Cpl. Daniel Cornier and his colleague, Chaak, in Afghanistan. "Pretty much trust him with my life," Cornier says.

The military's four-legged warriors now have a more hopeful future in store.

Military working dogs were once euthanized when their service days were over.

But, their fate is changing as military and civilian families pressure the Defense Department to make it easier for handlers to adopt their canine colleagues.

Looking out over Camp Pendleton's K-9 training field in California, Marine Cpl. Daniel Cornier shares stories about Chaak, the dog he deployed with to Afghanistan.

His words are halting and emotional.

"He's...pretty trustworthy. I can trust him. Pretty much trust him with my life," he says.

Chaak is a bomb-detecting dog who walked in front of the Marine during his missions.

"I spent almost three years with him...you get really attached to him. You just don't want to let go," he says. 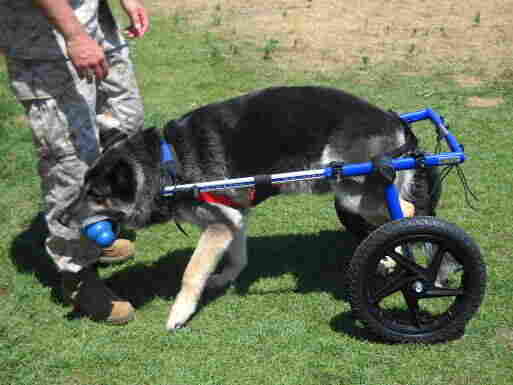 Rocky lost the use of his hind legs during his service as a military working dog. To assist his chances for adoption, he has been outfitted with a dog wheelchair. Gloria Hillard/NPR hide caption

Staff Sgt. Michael Harris had to give up his partner, a German Shepherd named Axel, after his deployment in 2006.

At the sight of Harris, Axel — now 8 years old — spins in a couple circles and then presses his body against the bars of the kennel. He never takes his eyes off the tall Marine.

"There's always going to be a bond with me and this dog," Harris says. "The time that we've spent and everything that we've seen, and seen through each other's eyes, and all the accomplishments that me and him have had together."

After his assignment with Harris, Axel served an additional two deployments. Now that his combat days are over, Harris says he's talked to Axel's current handler about adoption.

The adoption priority process is to first use the dog as a training aid for other handlers. Law enforcement agencies are second in line. Then, families who have lost a loved one in combat, followed by former handlers, and the general public.

Harris says another dog, Rocky, has seen three combat deployments. Rocky has lost the use of his hind legs.

"He's a really good dog," he says. "So he will make a great pet for someone in the household. And [he has] that drive to still want to play and live out the rest of his life, and hopefully have a happy life."

To assist his chances for adoption, Rocky is getting outfitted with a dog wheelchair. It didn't take long for the four-legged veteran to get the hang of it.

"Now he can actually get around and move," Harris says.

In a short time, Rocky is chasing his favorite ball as four Marines, including Cornier, watch proudly.

"I'd say he's doing pretty well. He slept about 10 hours yesterday. He ate — gave him a big old steak — and that was his day," Cornier says.

Cornier will be re-deployed later this year. He's already talked to his mom in Florida about caring for Chaak.

"She has a big, giant backyard, and she'll spoil him rotten," he says.