Accessibility links
Vote For Top-100 Science Fiction, Fantasy Titles To help you chart any fantastic voyages you might take this summer, NPR is assembling a list of the best science fiction and fantasy ever written. Let the voting begin! 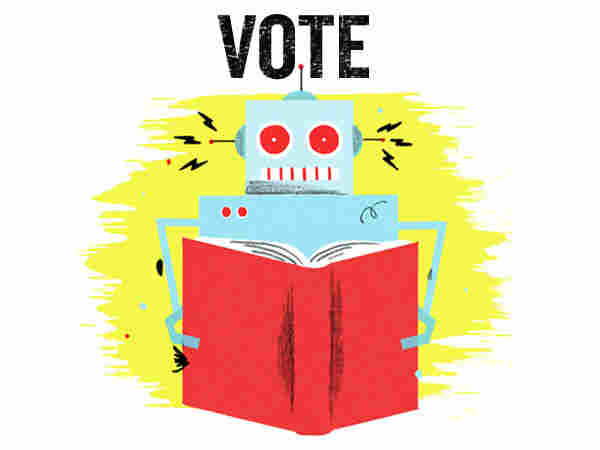 About Series: How to list series was a big topic of debate among our judges. In general, works that tell a more or less continuous story are listed collectively (e.g., "The Song of Ice and Fire"). In cases where connections among series members are looser, we tended to list some of the more prominent titles in the run (e.g., Small Gods, a "Discworld" novel). If you don't see your favorite series listed as such, try looking for individual novels.

Last month we asked you, our audience, to nominate titles for a top-100 list of the best science fiction and fantasy ever written. The response was overwhelming — almost 5,000 of you posted to the NPR site alone, and many thousands more offered suggestions on Facebook.

We've tabulated those suggestions and, with the help of an expert panel, narrowed the list to a manageable field of a few hundred titles. (Click here for a complete, printable list of all of the Science Fiction and Fantasy finalists.)

Scrolling through the list of great science fiction and fantasy reads below will feel like a journey back in time for some of us, a voyage of discovery for others. But novice or veteran, everyone loves a contest. So, let the voting begin!

Here's how: Everyone gets 10 votes. Select your top 10 favorite titles, and then scroll down to the bottom of the poll and click "Submit." Feel free to lobby for your favorites in the comments. We'll be back in about 10 days with the results.

Gary K. Wolfe is an award-winning science fiction critic and longtime reviewer for the science fiction and fantasy magazine Locus. He teaches at Roosevelt University, in Chicago, and his latest book, Evaporating Genres: Essays on Fantastic Literature, was published by Wesleyan University Press earlier this year.

See The Results Of Past Polls: