Accessibility links
After 15 Years, GOP Revives Balanced Budget Idea Congressional Republicans last attempted a major push to pass a balanced budget amendment to the Constitution back in 1995. Now they intend to try again. But the same old arguments about potential damage to programs like Social Security make it a tough sell. 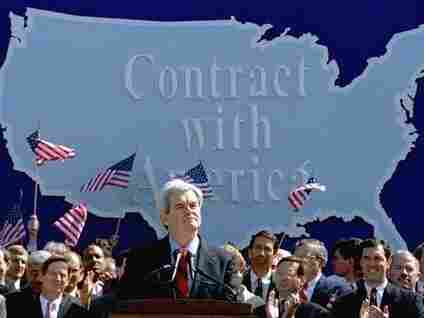 Then-House Minority Whip Newt Gingrich during a 1994 rally where he pledged a "Contract with America," which included a balanced budget amendment. John Duricka/AP hide caption

It's an idea whose time may have come again.

There was lively debate about amending the Constitution to require a balanced budget throughout much of the 1980s and 1990s, but the issue seemed to die off in the face of the federal surpluses that marked the end of the Clinton years.

"The reason it fell off the radar screen then is we actually did it," says Robert S. Walker, who served on the House Budget Committee as a Pennsylvania Republican during the Clinton administration. "We simply said, look, if it's not possible to pass the amendment, let's balance the budget."

Deficits have long since returned with a vengeance, and now so has the idea of a balanced budget amendment. The call for passage of such an amendment — or at least a congressional vote on one — became a major sticking point during the final days of the debate over raising the debt ceiling.

Now the final deal requires that both houses of Congress vote on a balanced budget amendment before Dec. 31.

A renewed effort to ratify a constitutional amendment seems likely to raise the same arguments that were heard when the issue last had real political salience, more than a decade ago. Once again, the need to impose fiscal discipline will be weighed against politically difficult cuts to programs such as Social Security.

"It's going to be a very lively debate," says Walker, who is now a lobbyist. "It sets the stage for a real debate in next year's election."

The budget fell out of balance, but Republicans were in the awkward position of seeming to blame a Republican president for deficits. Now, they have a cleaner hit.

The idea of mandating a balanced budget has been kicked around since the earliest days of the republic. James Madison succeeded in blocking an attempt to put such restrictions on federal spending during the Constitutional Convention, but the Constitution does ban states from issuing "bills of credit."

Amendments regarding the federal balance sheet were introduced as early as the 1930s but picked up real steam during the presidency of Ronald Reagan. By 1984, more than 30 states had passed resolutions calling for a constitutional convention to take up the issue (although a few states subsequently changed their mind and rescinded their calls).

Congress voted repeatedly on various amendments, but the issue took on real currency in 1994, when Republicans regained control of Congress. House Republicans made the balanced budget amendment the central pillar of their primary campaign document that year, the Contract With America.

The Contract With America was the brainchild of Newt Gingrich, then the House GOP leader and now a faltering candidate for president. (He now says a balanced budget amendment would lack sufficient support to pass Congress, but would be a useful vote to put people on record leading into the 2012 elections.)

Back in 1995, the House easily passed the amendment within a month of Gingrich and the GOP taking control, with 72 Democrats joining nearly all Republicans in support.

It was clear all along that the fight would be in the Senate. Oregon Sen. Mark Hatfield was the lone holdout on the Republican side, worrying that such an amendment would either be a toothless gimmick or shift budget authority from Congress to the courts.

From Surplus To Deficit

Federal deficit spending has grown rapidly in recent years, following a brief period of surplus at the dawn of the century.

Hatfield offered to resign so that the 66 votes in support would be enough to make up a two-thirds majority in a 99-member body.That idea was rejected.

Younger Republicans sought to strip Hatfield of his chairmanship of the Appropriations Committee. The attempt at punishment failed — and had the effect of taking the political heat off the six Senate Democrats who had switched their support to "no" after supporting a version of the amendment the previous year.

Senate Majority Leader Bob Dole of Kansas, who became the GOP's presidential nominee in 1996, thought that the issue would continue to resonate with the public in subsequent elections. "We may win even if we lose," he said before the Senate vote.

Always The Other Side's Fault

That turned out not to be the case. President Clinton and congressional Republicans agreed on a major deficit-reduction package in 1997. Together with a sharp increase in revenues brought in by the dot-com bubble, the federal budget ran surpluses during the last three years of the Clinton presidency.

"It faded away because we had a balanced budget for a few years," says John J. Pitney Jr., a government professor at Claremont McKenna College. "That took a lot of pressure off."

Deficits soon returned under President George W. Bush, due to a combination of recession, tax cuts, spending on wars in Iraq and Afghanistan, and a new prescription drug program for the elderly. Republicans, who have traditionally been the most ardent supporters of a balanced budget amendment, mostly kept mum.

"The budget fell out of balance, but Republicans were in the awkward position of seeming to blame a Republican president for deficits," Pitney says. "Now, they have a cleaner hit. You have a Democratic president and big deficits, so the idea of a balanced budget amendment has a lot more political appeal on the right." 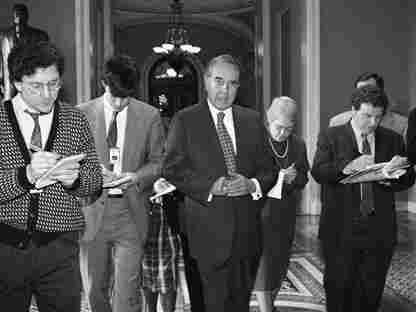 Senate Majority Leader Bob Dole on Capitol Hill on March 1, 1995, after he came up one vote short in his quest to pass a balanced budget amendment in the Senate. John Duricka/AP hide caption

For an amendment to be ratified, it not only has to win two-thirds support in both chambers of Congress, but approval by three-quarters, or 34, of the states.

That might have been a tough slog back in the 1990s, suggests budget historian James Savage of the University of Virginia. State leaders have to worry that a balanced federal budget will translate into less aid coming their way from Washington.

"Some governors were more supportive than others," Savage says.

According to public opinion polls, the public generally supports balanced budget amendment proposals. "This always has solid majority support," says Karlyn Bowman, a polling expert at the American Enterprise Institute. "People have to balance their checkbooks, and therefore they think the federal government should, too."

But when Americans are asked specifically about the types of changes to government programs and tax rates required to balance the budget, polling support drops off fast.

For instance, a 1994 CBS/New York Times poll conducted just after the 1994 election found that 81 percent of Americans supported a balanced budget amendment. That number dropped to just 30 percent when they were informed that balancing the budget might entail cuts to Social Security, Medicare and education.

"The appeal of an amendment is that you can always talk tough without having to get specific about how you would get to a balanced budget," says Maya MacGuineas, fiscal policy director at the New America Foundation.

And the job of achieving balance has gotten a lot harder since the mid-90s, MacGuineas points out. Deficits have grown rapidly since in actual dollars and as a share of the nation's economic output.

"The huge difference is that at that time there was some chance at balancing the budget, if you really tried hard," says Rudolph Penner, who directed the Congressional Budget Office during the 1980s and is now a senior fellow at the Urban Institute.

"I haven't seen any serious budget proposal at this time, including the president's fiscal commission and the House Republican budget, that would balance the budget before 2030," Penner says.

Any constitutional amendment that Congress considers will likely require that the budget be balanced within a set time frame, most likely 10 years. Doing so would trigger a debate over Social Security, Medicare and tax policy of a scope that would dwarf the type of figures that have been vigorously argued over in recent weeks.

"People don't realize what a balanced budget amendment would mean," says John Tures, a political scientist at LaGrange College in Georgia. "People have wildly distorted ideas about what we spend money on. They think all we have to do is cut foreign aid, which makes up a fraction of the bill, and we'll balance the budget."

For that very reason, Tures supports passage of an amendment. Without the discipline constitutional requirements would impose, he says, Washington will never get the budget under control in time to cope with the aging of the baby boom generation.

A balanced budget amendment, he argues, would give politicians a ready-made excuse whenever they had to make painful choices. "It will be the target to blame everything," Tures says.