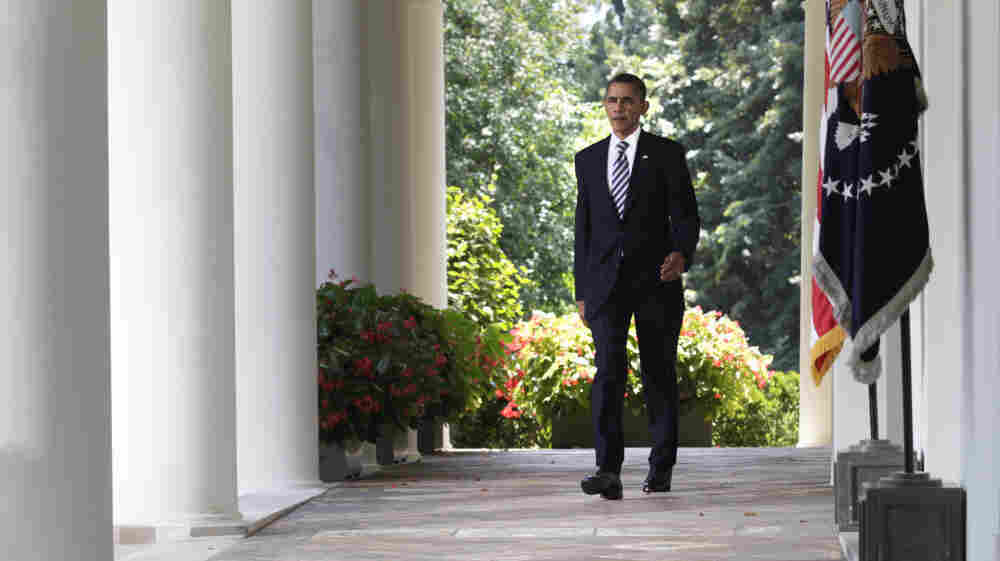 President Obama walks to the Rose Garden of the White House to discuss the debt-ceiling bill passed by the Senate. Carolyn Kaster/AP hide caption

The Senate approved emergency debt-ceiling legislation Tuesday, averting a U.S. default and ending a self-inflicted political crisis that has shaken confidence in the nation's credit and its political leaders.

The bipartisan bill passed on a 74-26 vote just hours before a midnight deadline to get a deal done. President Obama then signed it into law.

"It's an important first step to ensuring that as a nation we live within our means," Obama said at a Rose Garden news conference following the vote. "This is, however, just the first step. This compromise requires that both parties work together on a larger plan to cut the deficit."

Lawmakers, he said, still need to find a balanced approach to reducing the deficit that includes some adjustments to health care benefit plans for the elderly and reforming the tax code so the wealthy pay more.

The president praised lawmakers for finally passing the compromise bill, but he demanded that they take immediate steps to boost job creation when they return from their summer break. He also said he was not giving up on his insistence that Congress allow taxes to be raised on big corporations, through an end to loopholes, and the richest Americans.

"We can't balance the budget on the backs of the people who've borne the brunt of this recession," Obama said.

Although both the Senate and House easily adopted the bill that congressional leaders and the White House cobbled together over the weekend, there is little love for it. Republicans feel it does too little to change Washington's spending habits, while Democrats deplore its reliance on spending cuts alone to reduce the deficit while leaving tax policy unchanged.

"No one got what they wanted, and I always find that — even going back to the days that I practiced law — if people walk out of the room and parties are all dissatisfied, that's a pretty good settlement," Senate Majority Leader Harry Reid (D-NV) told NPR's Michele Norris on All Things Considered. "And that's what we had here. No one was happy with it. But it was the right thing for the American people."

But Senate Minority Leader Mitch McConnell (R-KY), who was a key architect of the deal, said it shows Congress can still act when it needs to.

"It's a testament to the goodwill of those on both sides that we were able to reach this agreement in time," McConnell said. "Neither side wanted to see the government default, and I'm pleased we were able to work together to avoid it."

Much of the measure, which the House passed 269-161 Monday night, was negotiated on terms set by House Speaker John Boehner, including a demand that any increase in the nation's borrowing cap be matched by spending cuts. But the legislation also meets demands made by Obama, including debt-limit increases large enough to keep the government funded into 2013 and curbs on growth of the Pentagon budget.

While Washington may be feeling a sense of relief that the worst has been avoided, NPR's Ari Shapiro said there's "a real disappointment that this is really a lowest common denominator plan. Everything in it was on the table months ago."

Many lawmakers who supported the legislation lamented what they saw as flaws and the intense partisanship from which it was forged.

"What troubles me about it is that the bipartisan compromise also represents a kind of bipartisan agreement by each party to yield to the other party's most politically and ideologically sensitive priority," said Sen. Joseph Lieberman (I-CT). "In the case of Democrats, it's to protect entitlement spending. ... In the case of Republicans, it's to not raise taxes."

The measure provides an immediate $400 billion increase in the $14.3 trillion U.S. borrowing cap, with $500 billion more assured this fall. That $900 billion will be matched by cuts to agency budgets over the next 10 years.

What follows next is more complicated. The measure establishes a special bipartisan committee to draft legislation to find up to $1.5 trillion more in deficit cuts for a vote later this year. If this supercommittee cannot reach a consensus or Congress fails to act on the recommendations by Dec. 23, there will be automatic cuts across much of the budget, including Pentagon coffers.

"There are only so many ways to find $1.5 trillion to save, and a lot of people think that's going to have to involve changes to Medicare, Medicaid and Social Security and to the tax code," Shapiro said. "But of course there are going to be obstacles. This committee is likely to include Republicans who have pledged never to raise taxes. It will likely include some Democrats who say they will not touch entitlement programs."

The Senate vote was never in doubt after Reid and McConnell signed on. But like the House vote, defections came from liberal Democrats unhappy that Obama gave too much ground in the talks, as well as from conservative Republicans who said the measure would barely dent deficits that require the government to borrow more than 40 cents of every dollar it spends.

"This is a time for us to make tough choices as compared to kick the can down the road one more time," said freshman GOP Sen. Jerry Moran of Kansas.

Vice President Joe Biden said the deal "has one overwhelming redeeming feature": postponing the next debt limit battle until 2013 and leaving the current fight behind.

"We have to get this out of the way to get to the issue of growing the economy," he said.

Fallout From The Gridlock

Polls showed that Congress and Obama have taken a sharp hit in U.S. public opinion because of the prolonged battle over lifting the debt ceiling, something that past Congresses have done as a matter of course.

The issues in this latest standoff will inform debates leading up to and beyond the 2012 presidential election, Shapiro said.

"For example, right around the corner, there's another standoff over next year's budget, which could result in the same threat of a government shutdown that we saw at the beginning of this year. And that debate is going to be over the same taxes, spending cuts, role of government ... all of the issues that we've heard hashed out over the last few months."

Even though Congress narrowly avoided default, it hasn't eased concerns around the globe. Stock indexes in Europe and Asia fell Tuesday amid worries about the U.S. economy. Wall Street had fared no better in afternoon trading.

Questions also linger about the effect the grueling political free-for-all will have on the U.S. credit rating, though the major credit-rating agencies — Moody's Investors Service and Fitch Ratings — reaffirmed the nation's AAA bond rating. Standard and Poor's is yet to make a decision.

Treasury Secretary Timothy Geithner told ABC News in an interview Tuesday he feared world confidence in the U.S. was damaged by "this spectacle."

He said "this is, in some ways, a judgment on the capacity of Congress to act."

With reporting from NPR's Ari Shapiro, David Welna and Brian Naylor in Washington, D.C. Material from The Associated Press was used in this report.