Accessibility links
The Nation: Sports Don't Need Sex To Sell Women have been making waves in sports, proving their own in an industry dominated by their male counterparts. However, Mary Jo Kane of The Nation argues, an overly sexualized depiction of these women seems to claim headlines and cover images. 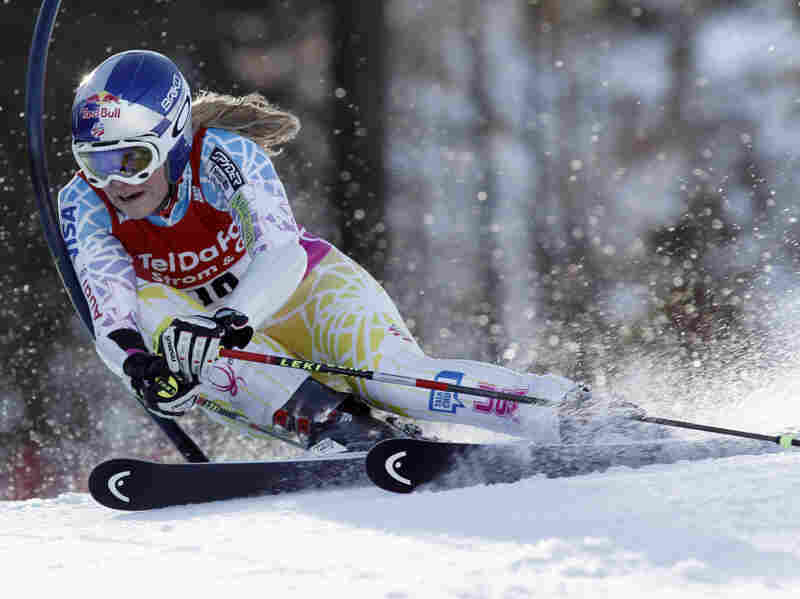 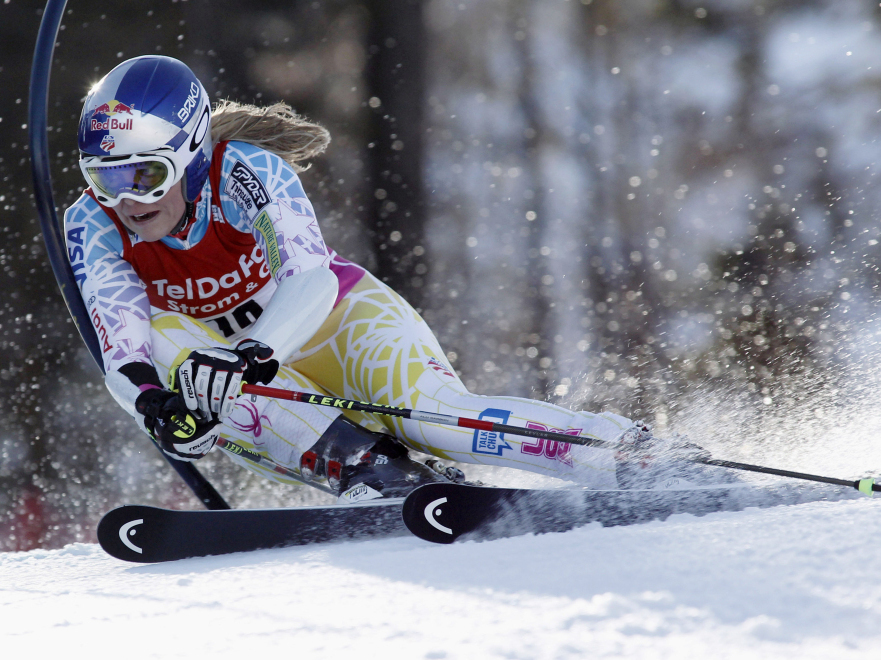 Lindsey Vonn, of the United States, speeds down the course during the first run of an alpine ski, World Cup women's giant slalom, in Arber-Zwiesel, Germany, Sunday, Feb. 6, 2011. Defending champion Vonn finished outside the top 10.

Mary Jo Kane is the director of the Tucker Center for Research on Girls and Women in Sport at the University of Minnesota.

"The newest kid on the women's sports block is finding that the old formula for attention-getting is as robust as ever. 'Sex sells,' says Atlanta Beat defender Nancy Augustyniak, who was astonished to learn she finished third in a Playboy.com poll of the sexiest female soccer players." — Wendy Parker, Atlanta Journal-Constitution

Last winter, champion alpine skier Lindsey Vonn won the downhill gold medal at the Vancouver Winter Olympics, the first American woman to achieve gold in this prestigious event. From 2008 to 2010, Vonn also won three consecutive World Cup championships, the first US woman and second woman ever to accomplish such a feat. For her unprecedented achievements, Vonn was named Sportswoman of the Year by the US Olympic Committee.

Even Sports Illustrated — notorious for its lack of coverage of women's sports — couldn't ignore this historic moment and devoted its cover to Vonn. SI's cover, however, blatantly portrayed Vonn as a sex object and spoke volumes about the rampant sexual depictions of women athletes. Rather than emphasize her singular athletic talent, the magazine depicted Vonn in a posed photograph, smiling at the camera in her ski regalia. What was most noticeable — and controversial — about the pose was its phallic nature: Vonn's backside was arched at a forty-five-degree angle while superimposed over a mountain peak.

Offensive as this portrayal may have been, it came as no surprise to sports-media scholars. Over the past three decades we have amassed a large body of empirical evidence demonstrating that sportswomen are significantly more likely to be portrayed in ways that emphasize their femininity and heterosexuality rather than their athletic prowess. Study after study has revealed that newspaper and TV coverage around the globe routinely and systematically focuses on the athletic exploits of male athletes while offering hypersexualized images of their female counterparts.

These findings are no trivial matter. Scholars have long argued that a major consequence of the media's tendency to sexualize women's athletic accomplishments is the reinforcement of their status as second-class citizens in one of the most powerful economic, social and political institutions on the planet. In doing so, media images that emphasize femininity/sexuality actually suppress interest in, not to mention respect for, women's sports.

Many of those charged with promoting women's sports take an entirely different view. As the quote beginning this article makes clear, the "sex sells" strategy remains rampant among sports journalists and marketers, who also believe that reaffirming traditional notions of femininity and heterosexuality is a critical sales strategy. This approach, or so the argument goes, reassures (especially male) fans, corporate sponsors and TV audiences that females can engage in highly competitive sports while retaining a nonthreatening femininity.

The widely held assumption that sexualizing female athletes is the most effective way to promote women's sports creates cognitive dissonance. To begin with, marketing campaigns for leagues like the WNBA also emphasize the wholesome nature of women's sports, highlighting the connection between fathers and daughters. The underlying message is that women's sports embrace traditional "family values" and that their appeal cuts across generational lines. Given this message, a "sex sells" strategy is counterproductive. How many fathers would accept the notion that support for their daughters' sports participation would be increased by having them pose nude in Playboy? And should we buy the argument that what generates fan interest is how pretty athletes are versus how well they perform under pressure?

I don't disagree that when SI publishes its swimsuit issue males are quite interested in buying that particular issue of the magazine. It does not automatically follow, however, that their interest in women's sports has increased. On the contrary, I would argue that what males are interested in consuming is not a women's athletic event but sportswomen's bodies as objects of sexual desire.

To investigate empirically whether sex truly sells women's sports, I conducted a series of focus groups based on gender and age (18–34; 35–55) with a colleague at the University of Minnesota. Study participants were shown photographs of female athletes ranging from on-court athletic competence to wholesome "girls next door" to soft pornography and asked to indicate which images increased their interest in reading about, watching on TV and attending a women's sporting event.

Our findings revealed that in the vast majority of cases, a "sex sells" approach offended the core fan base of women's sports — women and older men. These two groups rated the image that portrayed athletic prowess as the one most likely to influence their interest in women's sports. Said one younger female: "This image [of a WNBA player driving toward the basket] really sucked me in. I want to be there. I want to be part of that feeling." In contrast, younger and older females, as well as older males, were offended by the hypersexualized images. One older male said: "If she [Serena Williams in a sexually provocative pose] were my sister I'd come in, slap the photographer, grab her and leave." Even when younger males, a prime target audience, indicated that sexually provocative images were "hot," they also stated that such images did not fundamentally increase their interest in women's sports, particularly when it came to attending a sporting event. The key takeaway? Sex sells sex, not women's sports.

So what does sell women's sports? The answer lies with women's college basketball and the coverage it receives on ESPN. Each year during the NCAA's March Madness tournament, women's hoops garner record attendance and TV ratings. Coverage of the women's Final Four bears a remarkable resemblance to that of the men's — a focus on great traditions, conference rivalries (Duke vs. North Carolina), legendary coaches (Pat Summitt vs. Geno Auriemma) — and, most important, showcasing sportswomen as physically gifted, mentally tough, grace-under-pressure athletes.

Millions of fans around the globe just witnessed such media images and narratives during coverage of the Women's World Cup in Germany. Perhaps such coverage will start a trend whereby those who cover women's sports will simply turn on the camera and let us see the reality — not the sexualized caricature — of today's female athletes. If and when that happens, sportswomen will receive the respect and admiration they so richly deserve.