Accessibility links
The Bizarre Pitch For 'The Playboy Club': It's All About Female Empowerment? In a panel discussion on Monday, the producers and cast of The Playboy Club told critics that the new NBC drama is really all about women who have the greatest opportunities ever, who can do and be anything they want.

The Bizarre Pitch For 'The Playboy Club': It's All About Female Empowerment?

The Bizarre Pitch For 'The Playboy Club': It's All About Female Empowerment? 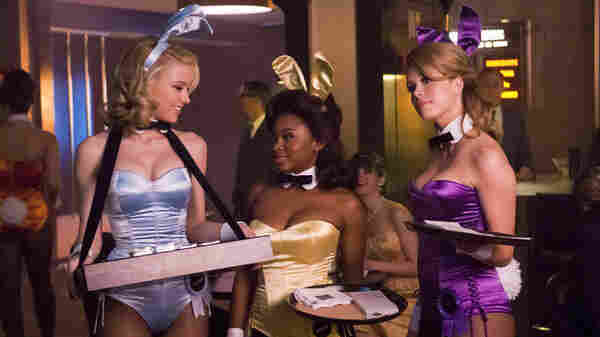 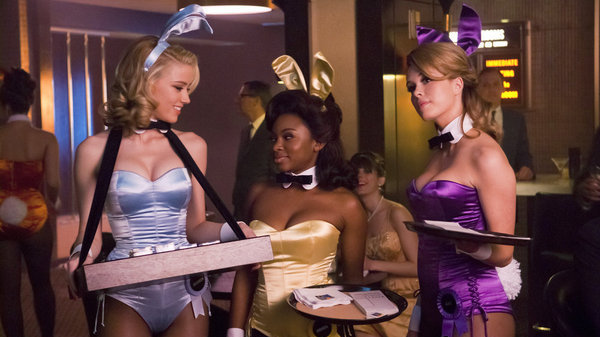 I didn't enter the NBC session for the new drama The Playboy Club particularly offended by it. To me, it has looked from the start like the network's straightforwardly network-ish attempt to capitalize on Mad Men, more than anything. Eddie Cibrian plays Nick, a very (very) Don-Draper-like guy who hangs around the club smoking and being conflicted; it's full of stylized '60s touches; the women's hair is to die for. The pilot is silly and full of bad dialogue, but it's cheesy more than offensive. The most noteworthy thing about it was probably the co-branding with the Playboy empire, which includes Hugh Hefner's participation in the pilot doing a voice-over.

But the pilot does end with the curious line, recited by Hefner, "Bunnies were some of the only women in the world who could be anything they wanted." Given the fact that the Bunnies in the show have to ask permission to wear a coat when it's cold outside and they're working the door — permission that, in the pilot, is denied by the man to whom they direct the request — it's a little hard to understand what kind of freedom that line is supposed to be talking about.

When someone at the TCA press tour session about the show asked about that, executive producer Chad Hodge said, in part, "Really, the show is all about empowering, and who these women can be, and how they can use their position to get what they want."

So just remember, it was Chad Hodge who brought up female empowerment, not any of the critics in the room. We just wanted to know what they meant when they said that these women, who live under very regimented routines and are inspected and regulated down to the finest detail, could do and be whatever they wanted.

At any rate, this was a very curious pitch for the show, that it was about female empowerment. Not because Bunnies couldn't be empowered or couldn't find their experience empowering (undoubtedly, many of them did), but because the show doesn't seem to have any interest in any way in which the experience might work that way. Earlier in the day, NBC programming chief Robert Greenblatt — who perhaps didn't get the "it's about empowering women" memo — had described The Playboy Club as a high-energy soap opera, a description that seemed perfectly adequate to me. Now, we were being told that it was, essentially, feminist.

Now, it's possible that down the line, these characters will be using their positions to "get what they want," but in the pilot, that doesn't happen at all, because there's not much indication that they want anything, unless what they want is directly related to the Playboy organization or finding husbands. The central Bunny, Bunny Maureen, is too busy getting herself into a gigantic mess that Nick has to extricate her from to have goals other than finding the right way to yell for help. Bunny Brenda (Naturi Naughton), the first "chocolate bunny" (their words, not mine), says her aspiration is to be the first "chocolate centerfold." The rest of them mostly are concerned about marrying well. It's undoubtedly true that some Bunnies in real life wanted to use their positions for some underlying purpose, but none of the Bunnies on the show give any indication that they're using it to get anything except husbands or centerfold shoots.

That "centerfold" business is particularly curious because, when someone asked how a show centered around a "nudie magazine" is supposed to be empowering to women, some umbrage was taken, not on the basis that Playboy is empowering, but because this is, we were told, not about the magazine. It's about the clubs. Totally different! This theme returned when they stressed that these were bunnies, not centerfolds. Playmates were one thing; Bunnies were entirely another.

Now, of course, what's odd about that is that one of the scoldings we received from star Amber Heard over any concerns we might have about the show is that the society is too "Puritanical" and "it's just chauvinistic to deny women their sexuality." So she's arguing there that the sexuality of Bunnyhood is a good thing; that as long as the woman is doing it voluntarily, there's nothing wrong with employing your sexuality in commerce. That's certainly one valid way to look at what's really an age-old argument.

But if that's true, then why does it matter whether it's Bunnies or Playmates? If any discomfort with Bunnies is unfairly condemning of the right of a woman to employ her own sexuality for money, what's with the distancing from Playmates, as if that really would be exploitation if they were talking about the lives of the other women who have helped make an outrageous amount of money for Hugh Hefner? Are Playmates not entitled to market their sexuality?

The panel struggled mightily to fit Bunnyhood into a modern vision of independence. On the one hand, stars Leah Renee and Jenna Dewan Tatum talked about how Bunnies were empowered in the sense that they were able to be financially independent "at a time when jobs for women were pretty limited." But on the other hand, they argued that anything is empowering if you're doing it by your own free choice. But if your options are limited, how free is that choice, really?

Hodge argued, in the end, that the interaction between a Bunny and a customer at a table was all about "buoying women up and giving them the power," because the men weren't allowed to touch the Bunnies. Now, remember — these women are waitresses. They're not prostitutes. They're strangers, unknown to the men, who are serving drinks. And he is arguing, in effect, that they have been buoyed up and given the power because they are granted the right, while tottering around in painful costumes and high heels for the gratification of their customers, not to be physically touched. They have all the power because the club tells patrons that they're not supposed to touch them. They don't really have the power of doing anything; just the power of withholding. Essentially, the argument is that for these women, the highest power they can possibly hold, and what truly elevates them, is the power to deny men the opportunity to touch them.

Do you touch waitresses, typically? Do you assume it's your right to touch waitresses? Or strangers? Or people in service occupations? What baseline assumptions have to be in place about who is otherwise naturally entitled to do what to whom for a "please don't touch this person" rule to grant anyone power over you? I'm just asking.

By sheer coincidence, HBO included in its press tour presentations last week a documentary about Gloria Steinem, and along with that presentation, they provided critics with a copy of her book, Outrageous Acts And Everyday Rebellions, which includes the piece she wrote about her undercover assignment working as a Playboy Bunny. So unfortunately for NBC, everybody who heard producer Hodge claim the women made $150 a night could go back and read Steinem's statements that in her experience, almost no one ever made the promised wages of $200 to $300 a week. And everybody who heard them talk about the beautiful costumes and the fun of being part of "Disney World for adults" could go back and read about how the costume was so painful to wear that Steinem wrapped gauze around her middle to keep the boning from rubbing her skin raw.

Of course, even with the costumes admittedly modified by producers to make them more comfortable than they were for real Bunnies, when they were asked what the costumes were like, Tatum said "Tight." Renee said, "Constricting." Naughton said, "Child, you cannot breathe." And Tatum added, "There's not a lot of drinking water."

So you can be anything you want, I guess, as long as you don't want to breathe or drink water.

Ultimately, producer Ian Biederman said that these were jobs that every woman wanted. "These were very highly sought after jobs," he said. "And not just by people who were troubled. By any woman. Anyone, people with college educations, everything ... Everybody wanted to have this, because it was a fantastic opportunity and a fantastic avenue to pursue dreams past this, and that's what the show is about."

Everybody wanted to have this.

The crazy thing is that none of this was necessary; the show is mostly just silly. Stereotypes are thrown into a big furnace and that furnace drives a big engine of pretty, goofy television. The girls shake their tails, puffs of smoke follow Cibrian wherever he goes, and the embittered woman approaching middle age goes after the ingenue for stealing her man. Just another day in soapy TV.

But if you're going to co-opt the idea of female empowerment to market your show to women, you have to answer for that decision. And as to that decision, the facts are these: Two women in the pilot find themselves in trouble. One goes to Nick for help; one goes to Hugh Hefner. Neither goes to another woman. Neither relies on herself. The "female empowerment" line isn't hooey because the women are Bunnies, and blaming Puritanical sex-negativity for the fact that nobody can choke down the empowerment argument is a red herring; a triple-deke of exploitation to defend exploitation. The "female empowerment" line is hooey because these particular women, as they are written in this particular show, have no agency and no apparent goals beyond Playboy World.

You can shake a Bunny tail and be empowered, no argument. It depends on what's going on in the rest of your life. But shaking a Bunny tail isn't enough to demonstrate empowerment if you have to go to Eddie Cibrian or Hugh Hefner for help every time you have a problem, and having the right not to be slapped on the behind when you deliver a cocktail isn't exactly a societal advance on the order of universal suffrage.

Perhaps the good news is that we've now reached the point where it's considered smart marketing to push a feminist spin on your show about Playboy Bunnies. Perhaps we've reached the point, in fact, where you have to try to fit your show into a "we have smart and strong women characters" mold. (Earlier in the tour, we had a panelist argue that Entourage had some of the strongest female characters on television, which raised eyebrows similarly.) Perhaps it's good news that strength, like sex, presumably sells. Just don't look for it here.

You probably wouldn't have, anyway.