Accessibility links
After Tornado, Joplin Creates Makeshift Schools The Missouri city's high school was devastated by a tornado in May, so the district is converting an old big-box store into classroom space — with new walls, bright paint and even a mural of the school's mascot. Though starting school on time won't end the struggles of the battered community, it certainly helps. 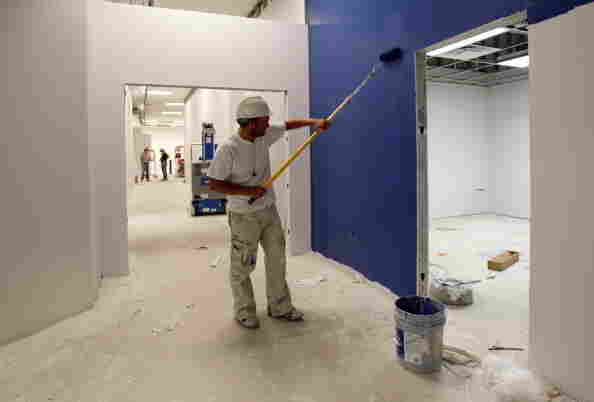 The former Shopko in the Northpark Mall in Joplin, Mo., is being converted into a temporary high school for 11th- and 12th-graders. A tornado in May destroyed more than half the district's classroom space. Kansas City Star/MCT via Getty Images hide caption 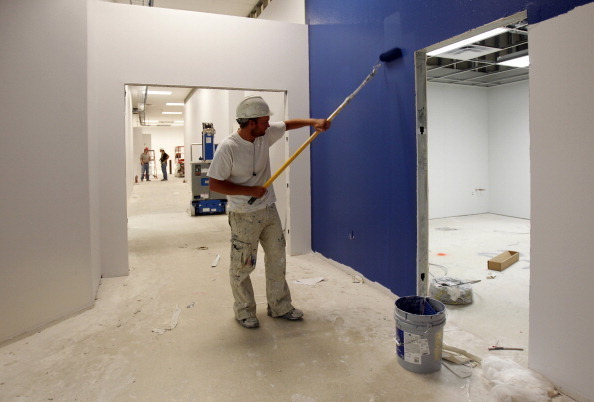 The former Shopko in the Northpark Mall in Joplin, Mo., is being converted into a temporary high school for 11th- and 12th-graders. A tornado in May destroyed more than half the district's classroom space.

Gearing up for the fall is a big job for most school districts. But in Joplin, Mo., where a monstrous tornado killed 160 people and destroyed more than half of the district's classroom space in May, the task is massive.

Thanks to a very resourceful approach, plenty of help and hard work, though, school will start as scheduled — and that means a lot to the community.

The tornado ripped across Joplin on Sunday, May 22, graduation day. The devastation was vast and surreal: phones and power lines in tatters, desperate triage at swamped medical centers, scores missing.

More than 3,000 students were suddenly homeless. The school district mobilized to account for every one of them.

"That was our first priority," says Joplin School Board President Ashley Micklethwaite. "Our next priority was, 'We need to get school up and running come fall. Where do we go?' And it was just looking at all available space within the community."

Moving To The Mall

Micklethwaite does mean all available space — like the old Shopko building outside of Northpark Mall, which will be 11th- and 12th-grade center for the new Joplin High School.

The big, white hulk of a building had sat empty in a vast parking lot after the store closed about a decade ago. Now, it's almost ready for classes.

Inside there's lots of bright, artificial light and movable walls, but no lockers. The students won't have textbooks. Rather than replacing books lost in the storm, the district has decided to issue each student a laptop.

Micklethwaite admits there's no recipe for this abrupt transformation.

"No, there's no template, we're making it up as we go," she laughs. She spots a huge mural of the school's mascot. "Oh, check it out! That's our eagle, that's awesome. ... These guys are just working their hearts out."

It's more rapid progress and not just at the mall. Out in an industrial park east of Joplin, construction crews are working overtime to transform a once-vacant shell into a middle school.

Before And After: A Bird's-Eye View Of Joplin

Elsewhere, volunteers have flooded the town. They're moving furniture and making donations; little kids have sent their allowance. Sheryl Crow is giving the schools money from selling a vintage Mercedes. All of this is deeply appreciated.

Emma Cox sits near the wreck of the old high school, where still more volunteers are salvaging lumber.

"I'm going to be a senior, and I'm going to go to school at Shopko High School," she says, laughing at the name.

The twister splintered her house and scattered her possessions. All summer she's worked to help her parents recover and move. Like many in Joplin, Emma lives the tornado every day.

"I think, in some ways, school is going to take a lot of people's minds off of it. Whenever I am engaged in something, I don't really think about what's all around the town," she says. "So, I mean, I think it's going to help put a lot of people back in their normal positions."

My home was damaged. My yard's just toast. But I have gladiolus coming up that I planted this spring, and they're beautiful, and I'm very thankful for that.

The tornado left well over a third of the district's kids homeless; still, almost all of them will go back to school, in Joplin, this month.

"We're having a big party," Mickelthwaite says. "It's just going to be so healing for our community to have our kids back in school."

Mickelthwaite has a day job, too. It's at the hospital in Joplin that the tornado wrecked.

"I'm excited; I moved this week into my new office cubicle, which is in a bank. Before that I was at a card table in my dad's living room, where we're living," she says.

"I cry most days. I laugh every day. And I try to find beauty every day," she says. "My home was damaged. My yard's just toast. But I have gladiolus coming up, that I planted this spring, and they're beautiful, and I'm very thankful for that."

No one in Joplin thinks that getting school started on time is going to end the struggles of this battered community, but it certainly helps.