Accessibility links
Justice Department Sues Alabama Over Immigration Law Alabama's new law — considered the toughest in the country — requires authorities to confirm the status of anyone they stop if there's reasonable doubt that person could be in the U.S. illegally. 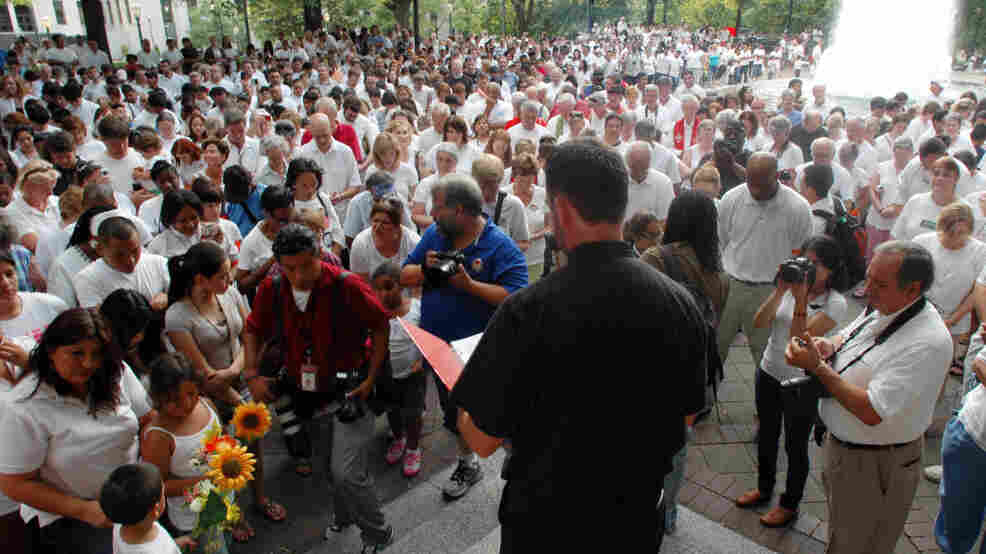 In June, participants bow their heads in prayer during a demonstration in Birmingham, Ala., to protest the state's new law against illegal immigration. Jay Reeves/AP hide caption

Reaction was swift in Alabama on Tuesday after the Justice Department filed a lawsuit to block a new immigration law set to take effect next month.

Alabama's new law — considered the toughest in the country — requires authorities to confirm the status of anyone they stop if there's reasonable doubt that person could be in the U.S. illegally. The law makes it a crime for undocumented immigrants to work, rent an apartment or get a driver's license.

Just before noon on Tuesday, Birmingham police dispatcher Carol Bryant had already fielded more than 100 calls. Bryant and other dispatchers would be responsible for checking records with the federal Immigration and Customs Enforcement — or ICE.

"It would, like, be more work, you know, doing the ICE check when it goes into effect," Bryant says. "Then they'll probably give us some kind of heads-up, you know, about [looking] for the extra workload."

In the lawsuit filed Monday, Birmingham's police chief said his department would have to reallocate scarce resources for something that's not a city priority. The Justice Department argues the law unconstitutionally interferes with the federal government's authority over immigration.

A group of religious leaders has also filed suit, claiming the law inhibits free exercise of religion. They cite one provision that makes it a felony — punishable by up to 10 years in prison — to transport undocumented immigrants.

Bishop Will Willimon of the North Alabama Conference of the United Methodist Church says he's talked to one church that uses its van to take Hispanic children to Sunday school.

"The person driving the van and in charge of this ministry has no idea whether they're documented or not. They just show up on the roadside and they pick them up," Willimon says. "They said they've got to prayerfully decide, should they continue this practice. That really is repugnant for that conversation to even be undertaken in our country."

Constitutional law expert William Ross of Birmingham's Samford University says church leaders may have a case. But he believes the most vulnerable part of Alabama's law is a provision that requires public schools to document the immigration status of all students.

"Because it could discourage children from attending public school," Ross says.

Cash-strapped schools say the requirement will be cumbersome and expensive.

The sponsor of the law — Republican Alabama state Sen. Micky Hammon — said in a press release:

"The Obama administration and federal bureaucrats refuse to fulfill their constitutional duty to enforce laws already on the books. And now they want to block efforts to secure Alabama's borders and prevent jobs and taxpayer dollars from disappearing."

Alabama is the latest state to face such legal challenges. Similar laws in Utah, Georgia and Indiana have been temporarily put on hold.