Accessibility links
Later In Life, Pregnancy Becomes A Numbers Game At 38, All Things Considered producer Melissa Gray had a less than 10 percent chance of natural conception. When she got pregnant, doctors said her baby had a 1-in-66 chance of chromosomal disorders. Not only was he that 1 in 66, he had an abnormality so rare, there weren't any numbers to predict it.

Melissa Gray is a producer at All Things Considered and author of the cookbook All Cakes Considered. She lives in Alexandria, Va., with her husband, two sons, two cats and one catfish. 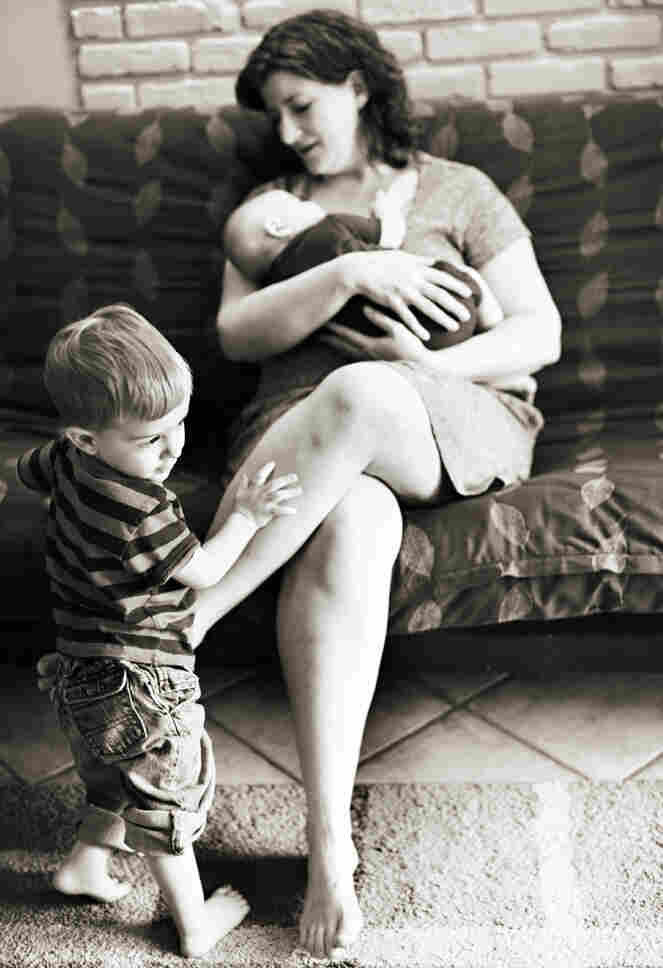 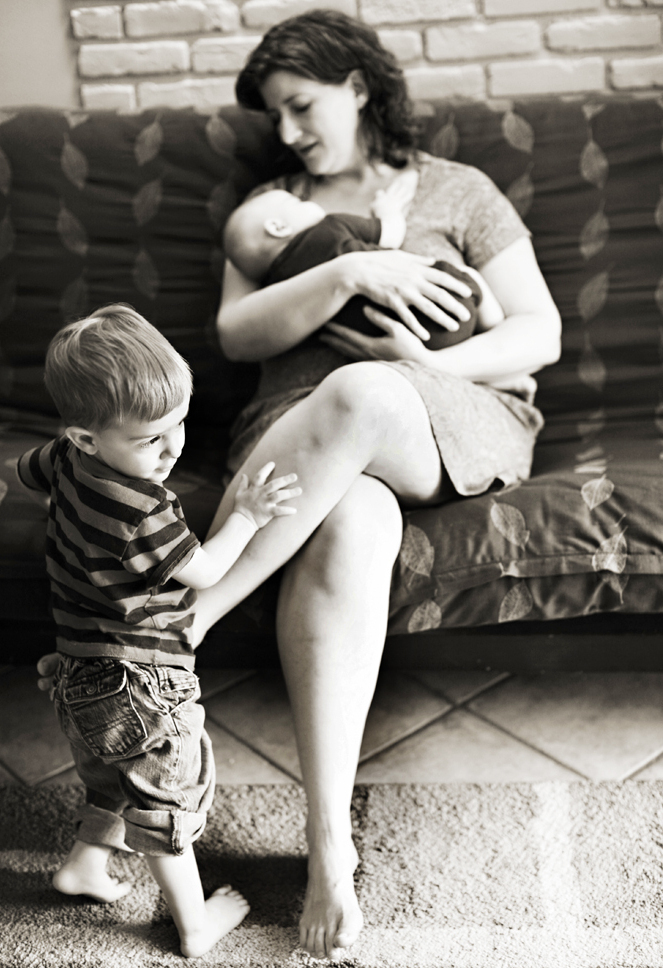 Melissa Gray, with her two sons, Thomas and baby Perry.

Unless it's the baby game. Then, poker legend Doyle Brunson has nothing on me.

Pregnancy in my "late reproductive years" was all about playing the numbers. When I was 38, my fertility doctor told me I had a less than 10 percent chance of natural conception each month; IVF boosted it to 30 percent. I got 100 percent pregnant on my second IVF cycle and was due to deliver just a few months shy of my 40th birthday. We opted for early genetic testing, which carried a 1-in-100 risk of miscarriage, because we were nervous about the 1-in-66 chance of chromosomal disorders, even though it was more likely that we'd have a normal, healthy infant.

Instead, we were that 1 in 66. And we had a chromosomal abnormality so rare, there weren't any numbers to predict it: Mosaic Trisomy 16. It's when you have cells, either confined to the placenta or clustered somewhere on the fetus, with three copies of a chromosome rather than the usual two. The geneticist said we probably had a better chance of winning the lottery. Our perinatologists, specialists in high-risk and superfreaky pregnancies, had never had such a patient. They advised me to stop Googling while they reviewed the few cases found in medical literature.

What we learned is that MT16 is a capricious abnormality. In the best, but least likely scenario, everything would progress normally. Fetal death was the worst, and fortunately the least likely, scenario. In between, there was a wide array of potential problems and no hard numbers on their probability: maternal hypertension, preterm birth, low birth weight and birth defects ranging from slightly curved fingers to heart malformations.

This news pretty much sucked the joy out of my pregnancy. Frequent ultrasounds were only partially reassuring: The baby was active with no detectable defects, though that didn't mean there weren't any. But as the pregnancy continued into the second trimester, his growth lagged and my blood pressure shot up. In the parking lot of the hospital, before my twice-monthly appointments, I'd sit in my car, fretting over the worst-case scenario — no fetal heartbeat — then drum up my courage to go inside.

Kleenex became my best friend during those months. Dread was a roommate, though Hope did pop in for a cup of tea once in a while. I refused to buy anything for the nursery until I reached 26 weeks, when the preterm survival rate hit 60 percent. My husband and I celebrated that milestone by visiting the casino and playing the slots, figuring with our fickle luck, there might be a big payout coming our way.

A Frightening Delivery, And A Healthy Baby Girl July 7, 2011
For A Family Under Stress, Another Difficult Diagnosis June 30, 2011

We broke even that day. But a week later, the stakes got higher. An amniotic sac rupture and dangerously high blood pressure landed me on hospitalized bed rest. We did everything we could to extend my pregnancy to 28 weeks, trying to reach that 80 percent survival rate. We made it, but I had become severely pre-eclampsic, and the baby had stopped growing.

Thomas was an April baby born on a bitterly cold January day. No birth defects. A strong heart. But so very, very tiny: 1 pound, 10 ounces. When I held him for the first time in early February, it felt like cradling a fledgling that had fallen from the sky, trailed by a tangled nest of tubes and wires keeping him alive.

I wondered then if our luck would hold out, if he'd stay solidly in that 80 percent survival rate, if he'd have any of the developmental delays we were warned about. I also wondered if MT16 would cause unexpected problems later in his life. But survive is what Thomas did, and he thrived. He seemed to ignore nearly every dire or worrisome prediction. He hit all his milestones on time, and many of them early.

My husband and I got a bonus round on the baby game. When Thomas was 16 months old, I got pregnant naturally and surprisingly, even though my chances had decreased to less than 5 percent. And despite an increased 1-in-53 chance of chromosomal disorders due to my advancing age, our baby was fine. The pregnancy was completely, blissfully, boringly normal, and Perry was born full term and healthy.

I realize now that numbers are numbers. They really can't tell you much about what's going to actually happen. Sometimes you're lucky, sometimes you're not. We just happened to hit the jackpot, twice.