Accessibility links
NASA's Eyes In The Sky Study Pollution On Earth Specially equipped NASA planes are flying over U.S. cities, gathering data on how pollutants form, travel and disperse in the atmosphere. The goal: to figure out how to use satellites to provide detailed, hourly updates on pollution levels across the country.

The P-3B NASA research aircraft, seen on the tarmac at Baltimore Washington International Airport on June 28, will gather data as it flies spirals over six ground stations in Maryland.

NASA, the agency best known for exploring space, is trying to answer some urgent questions about air pollution right here on Earth.

For much of July, the agency flew research planes between Washington, D.C. and Baltimore as part of a mission known as DISCOVER-AQ. The planes, along with weather balloons and ground stations, were gathering data on how pollutants such as ozone and particulates behave in the atmosphere. 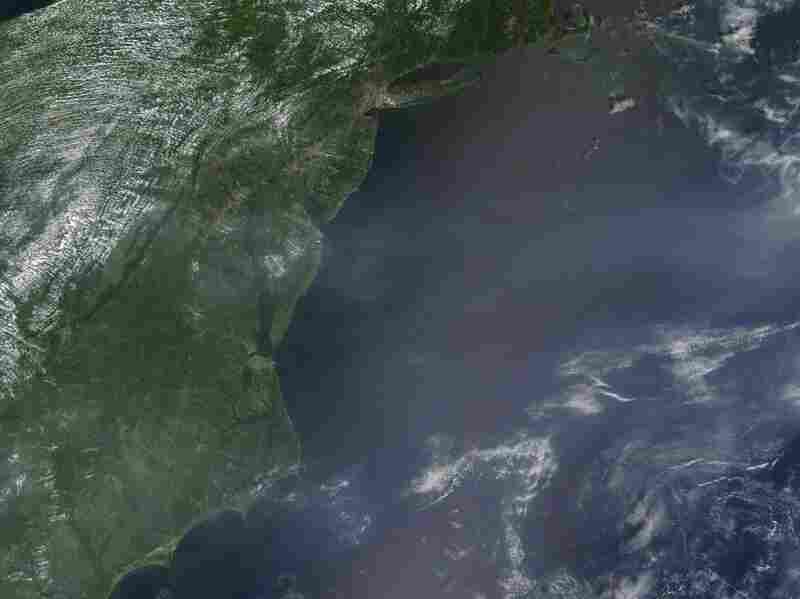 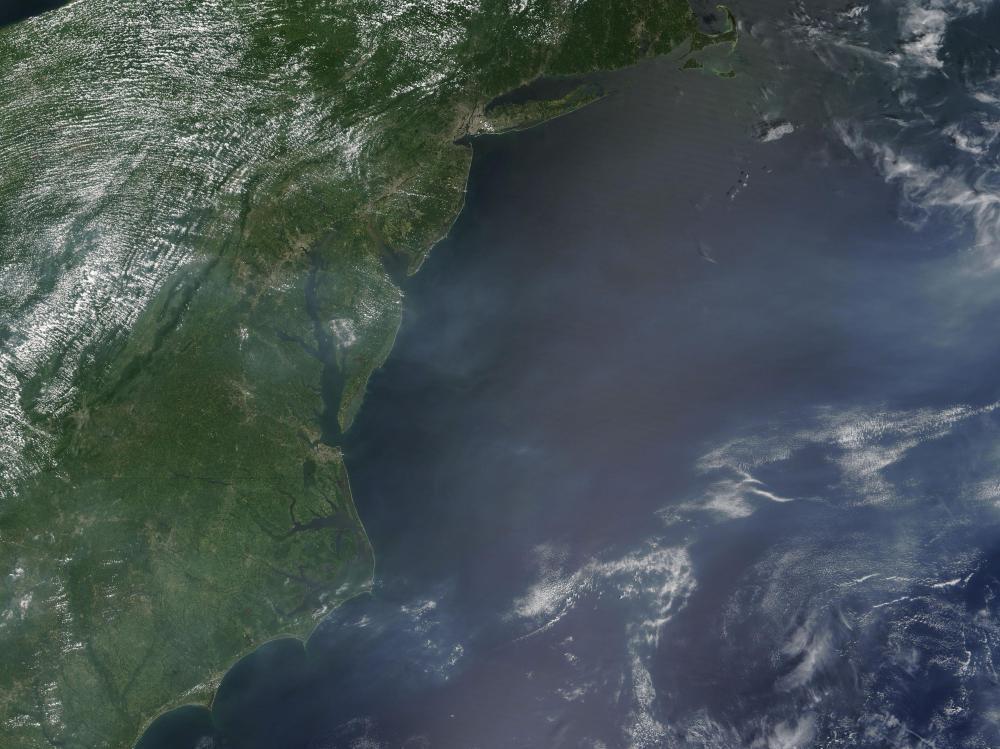 The short-term goal is to learn more about where these pollutants form, how far they travel after forming, and how they are distributed at different elevations in the atmosphere.

The long-term goal is to make it possible to use satellites to provide hour-by-hour monitoring of pollution levels across the country. That would help the Environmental Protection Agency and other parts of government enforce air quality standards.

One reason NASA picked the Baltimore-Washington traffic corridor to fly over is that it's a particularly bad place to inhale.

"It's a rather polluted region," says Ken Pickering, a scientist from NASA's Goddard Space Flight Center who is part of the DISCOVER-AQ mission. Maryland frequently violates the national ambient air quality standard for both ozone and for particulate matter, he says.

Ozone can damage your lungs. Airborne particles have been linked to cancer and heart attacks. And even though air pollution in the U.S. isn't as bad as it used to be, more than 125 million Americans still live in places that often fail to meet EPA air quality standards.

For several weeks, Pickering and other scientists were flying out of a NASA facility in Wallops Island, Va., about 100 miles south of Washington, D.C.

On one morning before a flight, Pickering was on the phone in a makeshift office next to a cavernous hangar. He was about to deliver some bad news about one of the instruments on the P-3, the mission's main research plane.

"The pump for the ozone instrument failed this morning," he says, and the flight can't leave until it's fixed. After the call, Pickering explains that the timing of the pump failure is unfortunate. "Today is going to be a very hot day in the Baltimore-Washington area," he says. "Only some scattered clouds. And this will allow plenty of sunlight to cook up a lot of ozone."

Ozone is a tricky pollutant to study because it isn't expelled from tailpipes or factory smokestacks. Instead, it forms when other pollutants, usually hydrocarbons and nitrogen oxides, react in the presence of sunlight. The NASA mission is hoping to learn more about how far from the sources of pollution ozone forms and at what altitude.

After a two-hour delay, the mission's principal investigator, Jim Crawford, of NASA Langley Research Center, strides through the door to announce that the faulty pump has been replaced. "We have an ozone instrument," he says. "So if you want to proceed out to the plane, I'm hoping we're out of here maybe half-hour, 45 minutes at the worst." 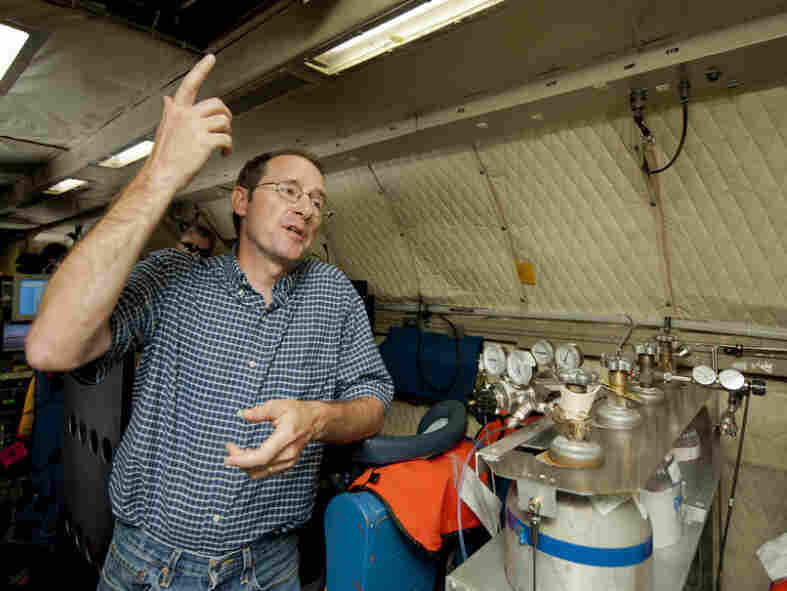 James Crawford, principal investigator of the DISCOVER-AQ project, aboard the P-3B at Baltimore/Washington International Airport on June 28, 2011. The aircraft is part of a month-long field campaign designed to improve satellite measurements of air pollution. Paul E. Alers/NASA hide caption 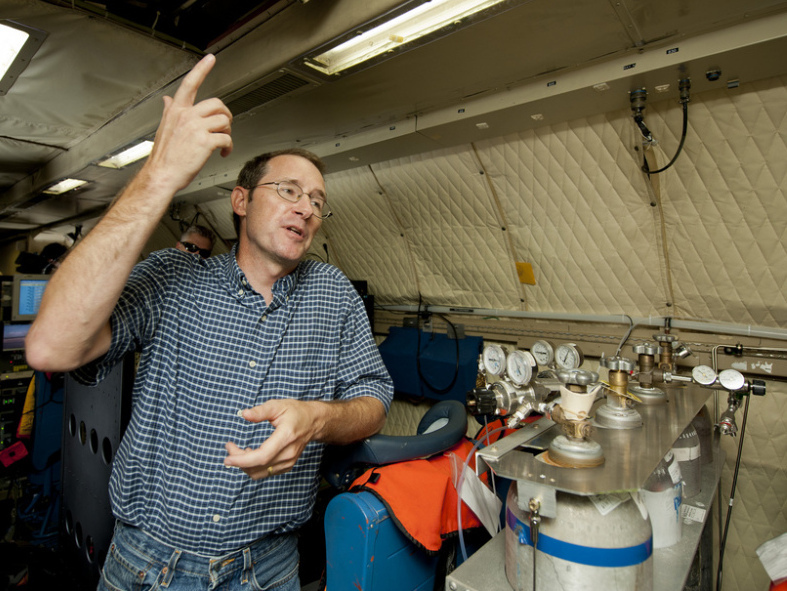 James Crawford, principal investigator of the DISCOVER-AQ project, aboard the P-3B at Baltimore/Washington International Airport on June 28, 2011. The aircraft is part of a month-long field campaign designed to improve satellite measurements of air pollution.

Scientists and other personnel head for the P-3, a four-engine turboprop that was used in the 1960s to track enemy submarines. On this mission, NASA is using a highly modified version to sniff out dangerous chemicals and particles in the air.

From a distance, "it looks like any other aircraft," Crawford says as he walks past the plane's massive nose gear. But up close, he says, "You begin to notice tubes and probes poking out the side."

Those tubes and probes outside allow the instruments inside to take air samples as the plane flies. And this plane is crammed with instruments, Crawford says as he climbs a set of rolling stairs and steps through the door into what used to be the plane's cabin.

"You're looking at a plane with a fuselage that's basically been emptied to start," He says. "And so we build these instrument racks, which are basically, I would say, maybe 4.5 feet tall and 3 feet wide that we anchor to the floor and then begin to fill with scientific instruments."

Any room left over is for the scientists, who sit in seats squeezed between instrument racks.

Soon the plane is airborne and heading north. Gradually, the fields below give way to urban sprawl and the concrete stripes of major highways.

The plane's interior is so noisy that scientists and the crew communicate primarily through headsets.

As the plane approaches Beltsville, Md., a town just north of Washington, D.C., the interior is a hive of activity. The scientists hover over instruments measuring the size and density of particles in the air, and the concentrations of many different gases, including ozone.

As forecast, it's a bad day for air quality, which makes it a good day to collect data.

"They say that there's a red condition in a lot of the surface stations, which means that ozone levels are exceeding the EPA-recommended exposure levels," says Bruce Anderson from NASA Langley.

The plane follows Interstate 95 at an altitude so low you can make out the color of each car and truck below.

Then, at a designated point, it begins a steep, spiraling ascent to more than 10,000 feet. That allows the scientists to see how pollution levels are changing with elevation.

Usually the air gets much cleaner at higher altitudes," Anderson says. "Today the pollution is extending up to about 8,500 feet. So you have to get above that level before you really see a clear blue sky."

The P-3 is just one of three planes taking part of this NASA mission. There is also a boat on Chesapeake Bay, people and pollutions sensors on the ground, and even weather balloons measuring pollution levels as they rise through the atmosphere.

And the P-3 is flying in crowded skies, on a circuit that takes it close to Baltimore Washington International Airport. At times, there are four people in the cockpit making sure the P-3 stays clear of other flights.

The DISCOVER-AQ mission isn't just about understanding pollution in this one area. NASA will be flying over other cities in the coming years.

The goal is to figure out how to use satellites to monitor pollution across the country, Crawford says. Right now, he says, satellites can't do that very well. 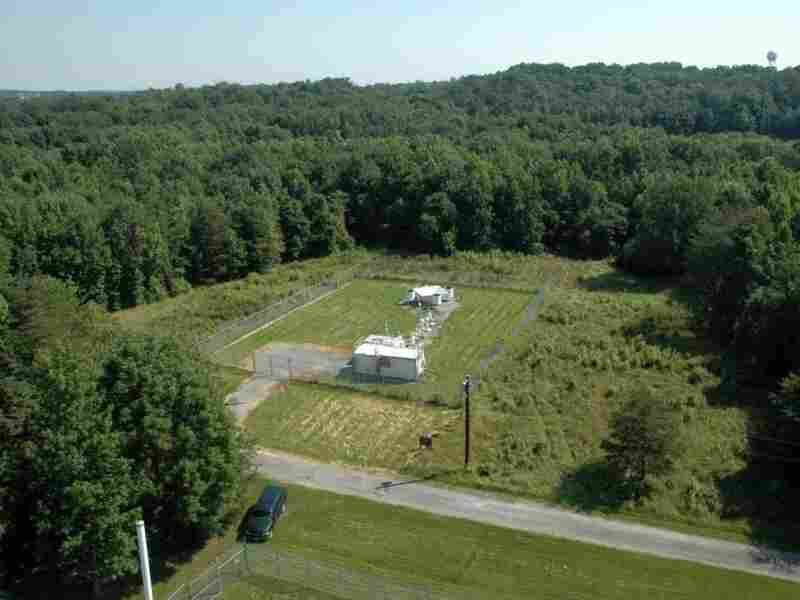 The DISCOVER-AQ aircraft will fly over this ground station in Beltsville, Md., to gather data in an attempt to better understand pollution in the atmosphere. Jennifer Hains/Maryland Department of the Environment hide caption 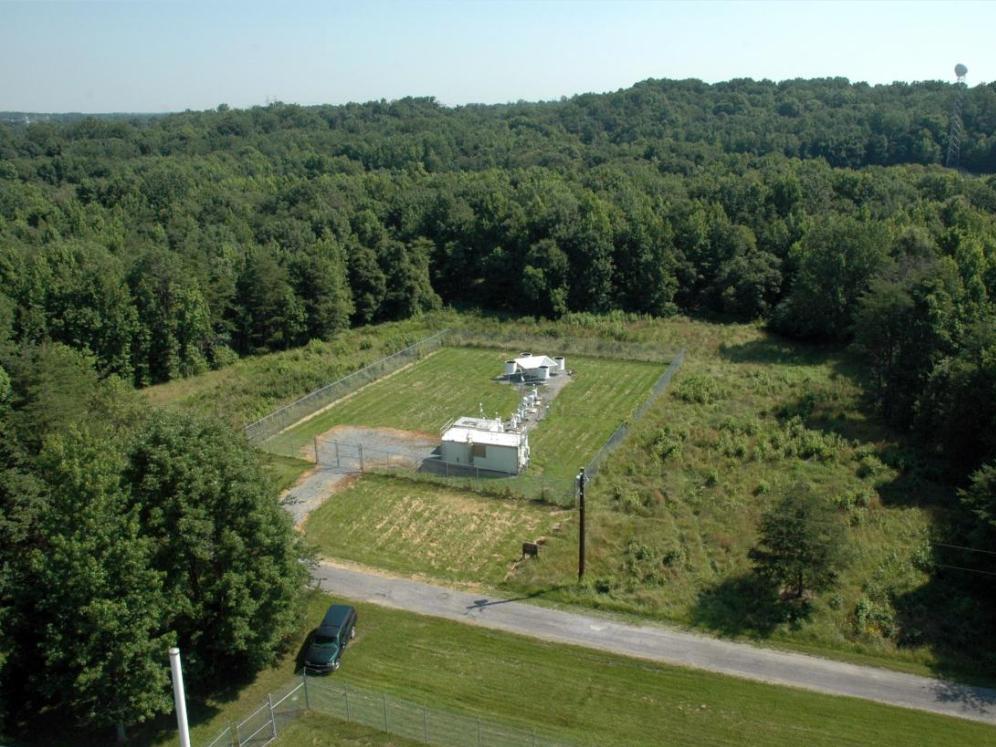 The DISCOVER-AQ aircraft will fly over this ground station in Beltsville, Md., to gather data in an attempt to better understand pollution in the atmosphere.

Jennifer Hains/Maryland Department of the Environment

"They paint great visual pictures of pollution," he says. "But they don't allow us to make clear judgments on exactly how much pollution exists and at what altitude in the atmosphere it resides."

Reliable, detailed pollution measurements from a satellite would be a major improvement on today's patchwork of ground measurements, which have lots of gaps, Crawford says.

"What a satellite can begin to do is fill those gaps," he says, revealing what's happening to air quality downwind of the urban areas often responsible for air pollution.

Today's flight will be a long, hot, hectic and noisy six hours in the air. But the scientists on board say it's worth it because of what's at stake.

"I look at the atmosphere like an astronaut might look at a spacesuit," says David Knapp from the National Center for Atmospheric Research. The Earth's atmosphere is what keeps us alive as our planet hurtles through space, Knapp says. He says this NASA mission should serve as a reminder of that.