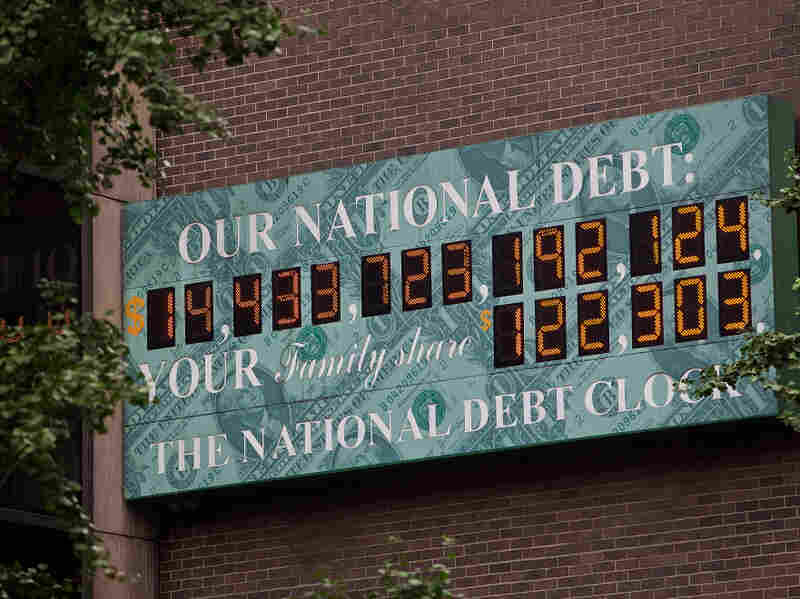 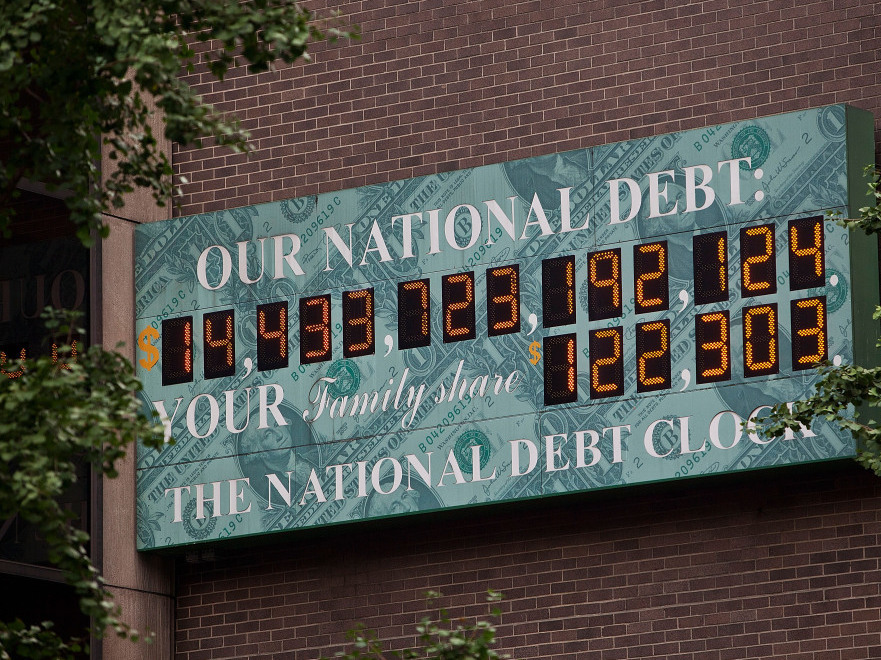 The National Debt Clock, a billboard-size digital display showing the increasing U.S. debt, is seen in New York City on Monday. Congress passed a bill Tuesday that would raise the nation's debt limit.

The bill passed Tuesday to raise the nation's debt limit and avoid default includes as much as $2.4 trillion in deficit reduction over the next decade.

"It's an important first step to ensuring that as a nation we live within our means," President Obama said.

The deal was hard-fought, with cuts some say will be painful, but experts say it doesn't come close to fixing the country's debt problems.

"It sounds good. It sounds big," says Diane Lim Rogers, chief economist at the Concord Coalition, a nonpartisan group that pushes for deficit reduction. "Unfortunately our fiscal challenges are much greater than that."

Rogers says this deal doesn't cut the nation's debt. Not even close. It just slows the growth. Even with all these cuts, the government will still spend more each year than it brings in, she says. Much more.

"All we've done with this debt-limit deal is committed to a plan that says, 'OK, we won't put quite so many new charges on our credit card each month,'" Rogers says.

The national debt is the total amount the U.S. owes — currently about $14.5 trillion. In credit-card terms, the debt is the outstanding balance.

The deficit is the difference between what the government spends each year and what it brings in. It's like the new charges listed on the bill. This year's deficit is expected to be about $1.4 trillion.

There are a couple reasons why this is a problem: The more the federal debt grows, the more interest the U.S. has to pay on that debt. Eventually it starts crowding out other priorities. Even with this deal, Rogers says, the nation's deficits are so big, they're outpacing economic growth. This means the debt compared to the size of the economy will continue growing.

Rogers calls that "a recipe for an unsustainable situation."

As part of the deal, the deficit trims come in two phases. Congress has agreed on nearly $1 trillion in discretionary and defense-spending cuts. A so-called supercommittee of Congress is supposed to come up with the other $1.5 trillion during the next few months.

Marc Goldwein, policy director for the bipartisan Committee for a Responsible Federal Budget, says Congress should be aiming higher.

But to get there, Goldwein says, members of the supercommittee would have to do things that would anger partisans on both sides. For Democrats it would mean accepting tough changes to Medicare and Social Security.

That would include "some painful adjustments like raising the retirement age or reducing benefits for high earners or increasing the amount of income subject to taxation," Goldwein says.

Republicans would have to accept revenue increases.

"We must reform the tax code," he says. "We need to get rid of all these deductions, credits, exclusions that really just riddle the tax code and cost us a trillion-plus a year."

But for every tax break and every government program, there is a constituency that doesn't want it to change. That's why it was so hard for Congress to settle on the deal it ended up with, and why it will be even harder to come up with a plan that would put a stop to that rising balance on the nation's credit card.