Accessibility links
Procrastination Nation: The Out Years The debt deal is supposed to produce savings in the "out years." By not addressing today what can be put off until tomorrow, politicians are able to handle problems just like the rest of us — by praying they will go away.

Procrastination Nation: The Out Years

Procrastination Nation: The Out Years

Ah, the Out Years.

During the recent debt-ceiling debate, the phrase became a recurring motif. "You've got to look at the deficit not just in the next 10 years," White House political adviser David Plouffe told NPR, "but does it also produce savings in the out years."

Sen. Mike Crapo (R-Idaho) told the Los Angeles Times that enforcement of the plan will be the key to its success, but "it's always in the out years and it never happens." 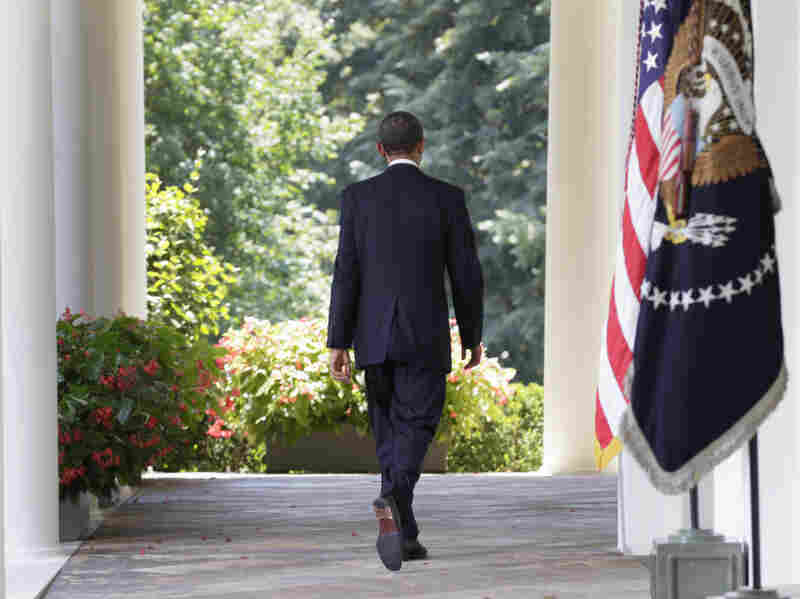 President Obama walks back to the Oval Office after speaking in Rose Garden of the White House on Tuesday, after the Senate passed the debt ceiling legislation. Carolyn Kaster/AP hide caption

And in a statement following the on-the-precipice passage of the raise-the-roof bill in the Senate, Sen. Jim Inhofe (R-OK) said, "This compromise simply does not go far enough and relies too heavily on out-year cuts."

The folks over at the nonpartisan nonprofit Committee for Education Funding define the Out Years as "the four fiscal years that follow the budget year." While the people at the Tax Policy Center, a joint venture of the Urban Institute and Brookings Institution, explain that an Out Year — when talking about budgets — is "a future year beyond the period over which budget costs are tallied (in recent years, after a 5- or 10-year period over which costs are estimated)."

In either case, it is clear that when some politicians refer to the Out Years they are talking about the years when they may be out — of office. They mean: the Far-Out Years; the Wonder Years — as in, "Wonder what life will be like then?"; years out there sometime in the distant future — beyond the short-term memory of the American people — by which time all the algorithms will have changed, many key players will be different and the political landscape will have shifted beyond recognition.

We are more reactive than proactive. We wait for problems to escalate instead of dealing with them when they are small.

Joseph Ferrari, a professor of psychology at DePaul University

"Sometimes things do get magically resolved by economic growth or by some other event like war or another crisis," says Mac McCorkle, who teaches the politics of public policy at Duke University. "And sometimes things get worse."

He says, "Some politicians believe that we need economic stimulus now, but debt reduction down the road. You can say that's correct. But then the questions become: When do you draw the line? When does 'now' end, and 'then' begin? When does the present become the future?"

In other words, when do these years become the Out Years?

By not addressing today what can be put off until tomorrow, aka the Out Years, politicians are able to handle problems just like the rest of us — by praying they will go away. But are we in danger of becoming Procrastination Nation?

"We are more reactive than proactive," says Joseph Ferrari, a professor of psychology at DePaul University and author of the 2010 book Still Procrastinating? The No Regrets Guide to Getting It Done. "We wait for problems to escalate instead of dealing with them when they are small."

Is it wrong to postpone actions, in hopes that the distant future may look — and be — completely different from the problem-filled present?

Life, he says, "is continuous, and things keep moving and changing."

But "we have no control over the future — only the present. That is why I talk about 'Just Do It – Now' or 'Just Say Now.' "

Maybe we should call "now" the "In Years."

So if tough decisions and unpopular political actions — decided upon by a supercommittee — will eventually have to be made in the Out Years, what exactly will those years look like? When this American life becomes that American life?

Chris Edwards, director of Tax Policy Studies at the Cato Institute, says, "Dealing with the debt is not something that will get resolved this year. And if you think this year's political battle is intense, this is just the beginning. It will be trench warfare over the budget for years to come. Not just between conservatives and liberals, but also, for example, between Republicans who want to cut defense and those that don't."

If Edwards is right, we may have to rename the Out Years the Ouch Years. Or the Vote the Rascals Out Years.

DePaul's Ferrari wonders if all this talk of Out Years will only lead to even Outer Years. And in that foggy future, he asks, "will we generate more excuses for not dealing with issues?"