Accessibility links
Money Can Buy You Love On Twitter Gawker, an online gossip site, claims Republican presidential hopeful Newt Gingrich paid to get many of his 1.3 million Twitter followers. His campaign denied it. But some people and companies do pay for followers. Experts say those users may appear popular, but it doesn't really matter if their followers aren't listening. 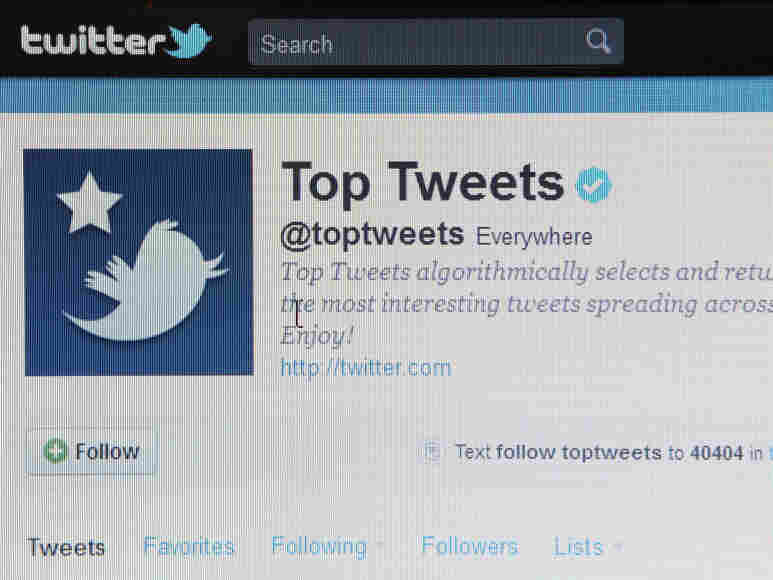 Companies can be hired to bring in Twitter followers for their clients. Oli Scarff/Getty Images hide caption

Earlier this week, the online gossip site Gawker reported that Newt Gingrich — a candidate for the GOP presidential nomination — may have paid to get most of the 1.3 million followers of his Twitter account.

Gingrich's campaign has denied the accusation. But on Twitter, numbers are essential — the more you have the better.

So having a low follower count can make you feel a bit inadequate, especially when you're sized up next to Twitter heavyweights like Britney Spears, who has 8.8 million followers, or Lady Gaga, who has 12.2 million followers. And you don't have to be a celebrity pop star either; NPR's very own Scott Simon has more than 1 million followers.

But lonely Twitter users, don't fret: Jake Schintgen is ready for the job.

Schintgen is a co-owner of Twitter1k, an online service that's boosted Twitter follower counts for a variety of clients, including social media newbies, celebrities, major clothing lines launching a new product and Christian groups looking for a bigger outreach.

For a little less than $25, Schintgen says, his company can take your Twitter follower count from zero to 1,000. But he says it will take a little bit of time, which is his biggest complaint from customers.

You get these really, really big numbers in your Twitter follower count. But they're useless numbers. You're speaking into an open cavern and no one's listening.

How To Bring In Followers

Schintgen says that quick of a turnaround is impossible given Twitter's spam filters.

Schintgen's company has plenty of competitors.

A site called uSocial boasts knowing "the secrets to making you an overnight rock star on Twitter."

And those secrets can be costly — charging thousands of dollars for large numbers, like a few hundred thousand followers.

Peter Shankman, who advises companies on social media strategies, says the secret to gathering Twitter followers en masse begins with pinpointing the most common Twitter user — the user that signs up for an account and then never tweets.

"People will reach out to these people and say, 'Hey, you know, if you start following this person, I'll give you a penny or I'll give you a coupon. Or follow these hundred people, I'll give you a dollar," he says. "A dollar's something of value to a lot of people, so they say, 'OK, this doesn't cost me anything.' Click, click, click. They follow those people."

A Way To Measure Popularity

And Shankman says that payout to followers has a payoff for the client.

"You get these really, really big numbers in your Twitter follower count," he says. "But they're useless numbers. You're speaking into an open cavern and no one's listening."

But, even still, a large Twitter follower count might catch the eye of anyone who's trying to measure popularity.

Gingrich recently called attention to his Twitter account, saying he has six times as many Twitter followers as all the other current GOP presidential hopefuls combined.

But, Shankman points out, numbers can be deceiving.