Accessibility links
On Location: Mansfield, Ohio's 'Shawshank' Industry The Ohio city where the prison drama The Shawshank Redemption was shot is home to an abandoned reformatory, a century-old oak tree, and now a cottage industry built up around the annual pilgrimages that fans of the movie make to see the locations.

The 1994 prison drama The Shawshank Redemption is a Hollywood rarity, in that it wasn't shot in Hollywood. The filmmakers didn't use New York or Toronto either. Instead, Shawshank was filmed almost entirely on location, in and around the Rust Belt city of Mansfield, Ohio, about halfway between Columbus and Cleveland.

This summer, as we explore the places where iconic American movies were filmed for our series "On Location," we've discovered that often, long after the cameras are packed up and the crew goes home, a film can leave an imprint on a town.

In recent decades, Mansfield has fallen on hard times. Westinghouse, the Tappan Stove Co., Ohio Brass, and Mansfield Tire and Rubber have all closed plants in Mansfield since America's heavy manufacturing boom went bust. The latest casualty: the local General Motors plant, which closed just last year. All in a city of fewer than 50,000. But at least one closure has brought with it a strange bounty. 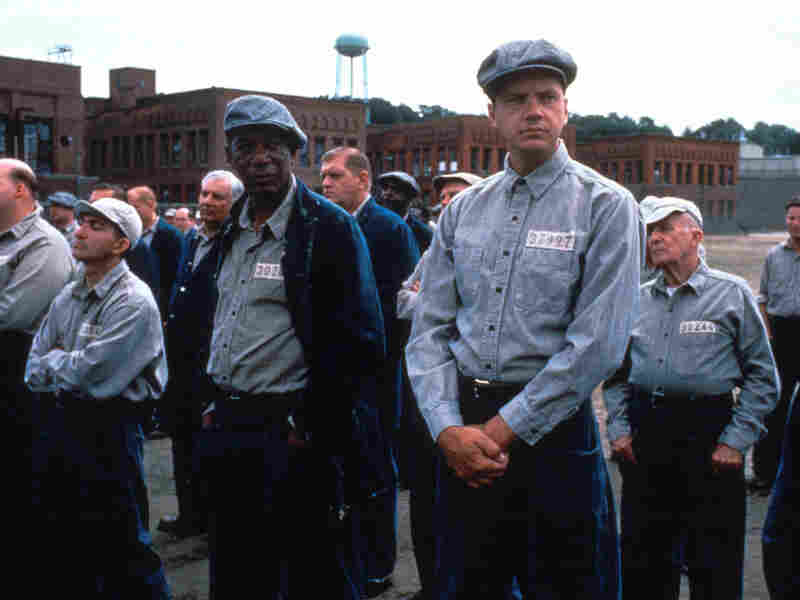 The Shawshank Redemption, starring Morgan Freeman (left) and Tim Robbins, was shot at the abandoned Ohio State Reformatory. Today, the buildings in the background are gone, but the prison's main building has been preserved by locals. Photofest Inc. hide caption 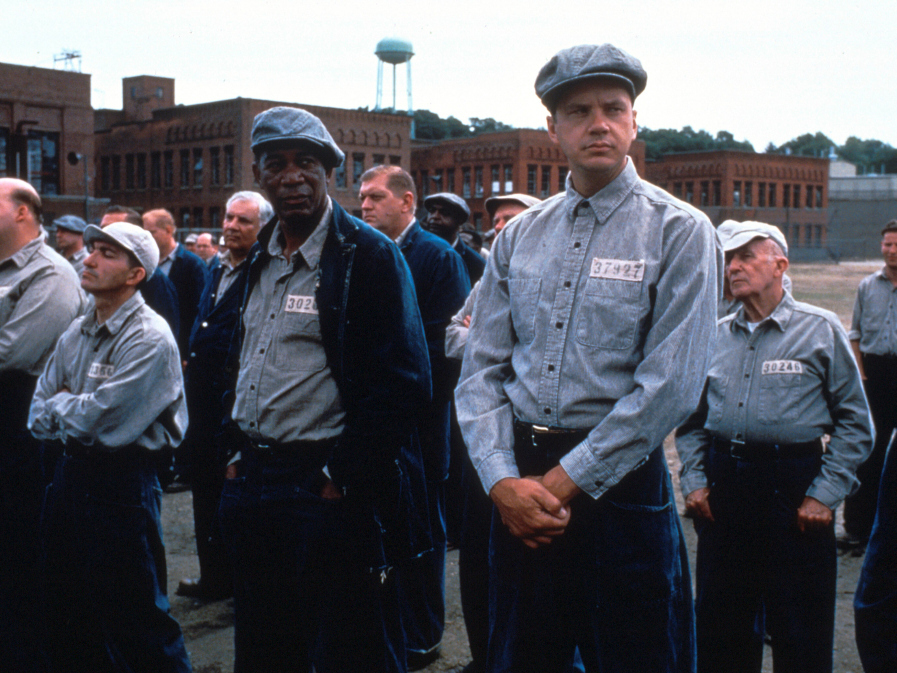 The Shawshank Redemption, starring Morgan Freeman (left) and Tim Robbins, was shot at the abandoned Ohio State Reformatory. Today, the buildings in the background are gone, but the prison's main building has been preserved by locals.

After nearly a century of use, the Ohio State Reformatory closed its doors on New Year's Eve 1990. The massive prison on the outskirts of Mansfield is a combination of three architectural styles: Victorian Gothic, Richardsonian Romanesque and Queen Anne. If that doesn't mean much to you, let me put it this way: It's gorgeous — and terrifying. Which may explain why Hollywood thought it would make a perfect Shawshank Prison.

Watch Clips from 'The Shawshank Redemption'

Advisory: Clips contain language that some viewers may find offensive.

Earlier this summer, tour guide Ron Puff walked me through the Reformatory. We began in the east cellblock, at six tiers high the largest free-standing steel cellblock in the world. Approximately 600 cells, 7 feet by 9 feet, held two inmates each. And that's just the east block, which was not used in the movie. But it's amazing how much of the Reformatory was used. Puff gives me a Shawshank tour, leading me through the warden's office, the Brooks library (now a storage room), the showers, and one of the most popular stops: solitary confinement. Even the fake sewer pipe that Tim Robbins' character uses to escape is still there, propped up on a little platform, as if the camera crew had just left for lunch.

When The Shawshank Redemption opened in theaters in September 1994, audiences largely ignored it. Even after seven Oscar nominations, the film struggled to find an audience. But home video and cable changed that.

Lee Tasseff, the president of the Mansfield and Richland County Convention and Visitors Bureau, was in Mansfield when the filmmakers came looking for a prison, and he is thanked in the film's credits. A few years after the movie opened, he says, his phone started ringing. And then people started showing up.

"They were random, and we never knew where they were coming from," Tasseff says. "Sometimes it was somebody from Korea; the gentleman who hitchhiked from England just stopped into our door."

I call them the Shawshank pilgrims.

Michael Demetriades lives in Florida and flew to Mansfield with his father-in-law for the Shawshank experience.

"In order to immerse myself into the experience," he says, "I wanted to go with actual images printed out of the movie so I could compare it back to real scenes when I was actually there in person."

Demetriades printed out 120 images from the film and carried them in a binder. He also programmed the film's locations into his GPS and listened to the film's soundtrack as he went. He laughs nervously as he describes just how far he went to get ready for his trip to Mansfield.

"I don't want to sound like too much of an extremist. But I was definitely prepared," he says.

Here's the thing: among Shawshank pilgrims, Demetriades is no extremist. Mansfield has become a mecca for pilgrims like him. They, of course, want to see Shawshank Prison. But the biggest draw for many of them sits about 15 miles south, in an old farm field. It's a giant oak tree. As Morgan Freeman's character struggles to make sense of his life once he's been paroled, it's that tree — and a promise he made to visit it — that gives him hope.

The tree is at least 100 feet tall and 175 years old. And, for many Shawshank pilgrims, seeing it is a spiritual experience. Go to YouTube, and you'll find videos of people simply recording themselves driving by it.

"It's almost like a cult following here," says Sybil Burskey, an administrative assistant at Malabar Farm State Park, which sits across the road from the tree. "We get phone calls; we get visitations. You can always tell when someone's looking for the Shawshank tree because they come into the gift shop, and they kind of have a puzzled look on their face."

The tree's owner — a local attorney — isn't amused by her tree's cult status. She's put up a fence, but that hasn't stopped thousands from driving slowly down Pleasant Valley Road, snapping pictures or missing the tree and ending up confused in Burskey's gift shop.

Jodie Puster works Tasseff in the Mansfield Visitors Bureau. Three years ago they put together The Shawshank Trail, including a brochure and map to help visitors find the tree — and all of Mansfield's Shawshank locations. But the trail is more than that. It's also a savvy bit of marketing.

Local businesses, Puster says, wanted to get involved, even if they had no direct connection to the film. Ed Pickens, owner of Cafe on Main, created a Shawshankwich. Across the street at the sweet shop the Squirrels Den, owner LaDonna Secrist is happy to sell visitors a Prison Bar candy bar while they check out her re-creations of scenes from The Shawshank Redemption in chocolate. If choocolate isn't your thing, you can grab a miniature Bundt cake in the shape of the Ohio State Reformatory from Joyce Wells and her Eatmor Bundt Co.

On my way out of Mansfield, I drop by the Reformatory one last time. While the state had planned to tear it down after The Shawshank Redemption was filmed, a core group of Reformatory enthusiasts stepped in, and the state eventually sold the building to them for a dollar.

It's a Saturday and the building is closed, believe or not, for private parties. There to greet me is Rob Klarman, another tour guide and volunteer liaison to the Reformatory's board of directors.

He tells me the Reformatory has never been more popular. It turns out the Ohio State Reformatory has become somehow hip. And the tours are just the beginning. You name it, people want to do it here: conventions, trade shows, ghost hunts, concerts, proms. People even want to get married here.

Klarman himself is here not on official business but because he has rented out the Reformatory for his daughter, Rachel, to celebrate her high school graduation. She happily admits that celebrating her graduation behind bars might seem a bit odd to some, but there's no place she'd rather be.

There's no way to measure what The Shawshank Redemption has done for Mansfield. There's the money, of course, from the filming itself as well as the steady business that follows the Shawshank pilgrims. But it's about more than money. It's about the last word spoken in the film: "Hope."

Shawshank pilgrims don't come to Mansfield looking for a photo-op behind bars or for gossip about the film's actors. They want to be inspired. To feel the same way they felt the first time they saw the movie. And, for the hard luck city of Mansfield, to be the source of inspiration for so many perfect strangers is, itself, a source of pride ... and hope.

Postscript: Just a few days ago, after my visit to Mansfield, a violent storm whipped through the area. And we're sorry to report that high winds split the Shawshank oak tree in half. Part of it is still standing, but it's unclear for how long. It's too early to tell what effect, if any, the loss will have on Shawshank pilgrims' eagerness to visit Mansfield. But it's important to remember this: Many of the film's fans are hardly visiting a place at all, but an idea.

And the idea of Shawshank lives on.