Accessibility links
Congress Reaches Deal To End FAA Shutdown The Senate majority leader said there is a bipartisan compromise to end the partial shutdown of the agency, which has left 74,000 transportation and construction workers out of work. In a statement, he did not specify details. 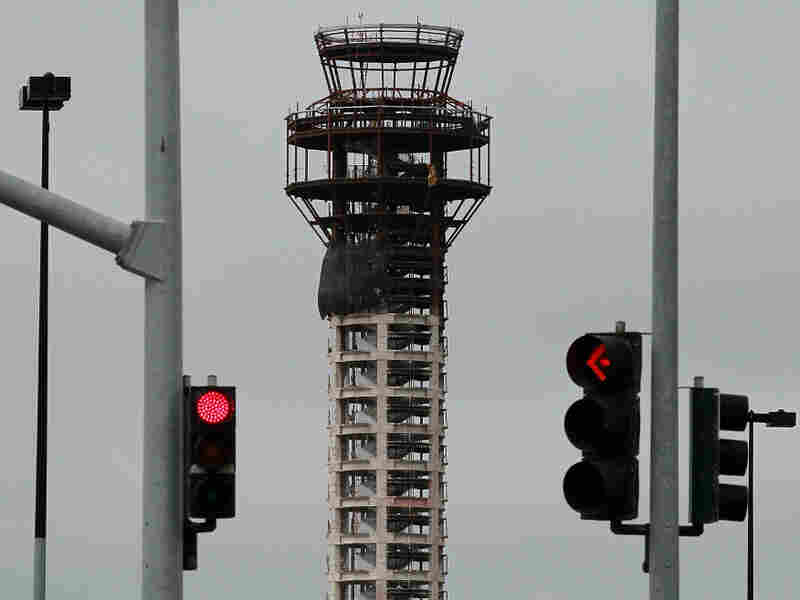 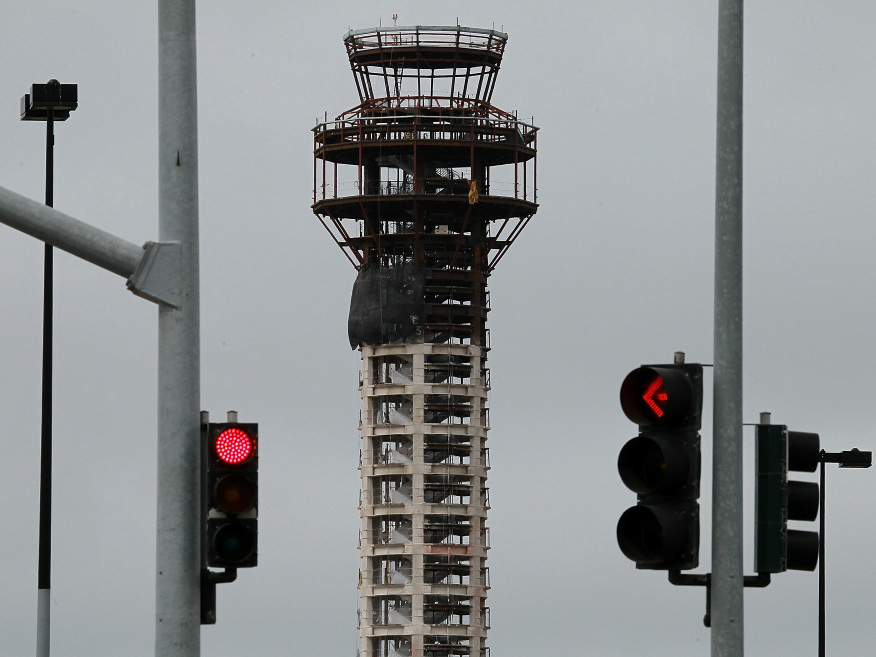 Construction crews working on a new FAA air traffic control tower at Oakland International Airport were told to stop working after the House of Representatives refused to reauthorize routine funding of the Federal Aviation Administration. A deal to restore funding was reached Thursday.

Congress has reached a bipartisan compromise to end the two-week partial shutdown of the Federal Aviation Administration that has idled 74,000 federal employees and construction workers and cost the government about $30 million a day in uncollected airline ticket taxes, the Senate Democratic leader said Thursday.

The deal would allow the Senate to approve a House bill extending the FAA's operating authority through mid-September, including a provision that eliminates $16.5 million in air service subsidies to 13 rural communities. A vote on the bill is expected Friday.

Republicans had insisted on the subsidy cuts as their price for restoring the FAA to full operation, but the cuts may become moot.

The bill includes language that gives the transportation secretary the authority to continue subsidized service to the 13 communities if he decides it's necessary.

Democrats said they expect the White House to effectively waive or negate the cuts.

"That was a $16 million savings House Republicans wanted, but even they acknowledged it was just a bargaining chip," NPR's Brian Naylor tells Melissa Block, host of All Things Considered. "I'm told Transportation Department officials say [Secretary Ray] LaHood has the authority to issue waivers when appropriate under the law."

The partisan standoff that led to the shutdown began last month when Republican Rep. John Mica, the chairman of the House Transportation and Infrastructure Committee, signaled his intention to attach the subsidy cuts to a bill to extend FAA's operating authority through mid-September. The agency has been operating under a series of 20 short-term extensions since 2007, when the last long-term FAA funding bill expired.

Senate Democrats complained that Republicans were breaking precedent by trying to enact policy changes that hadn't been agreed to on an extension bill. Senators refused to pass the House bill, saying to do so would be giving into legislative blackmail and inviting Republicans to up the ante on the next extension bill.

President Obama, who had scolded Congress for not solving the standoff, expressed relief Thursday.

"I'm pleased that leaders in Congress are working together to break the impasse involving the FAA so that tens of thousands of construction workers and others can go back to work," Obama said in a statement. "We can't afford to let politics in Washington hamper our recovery, so this is an important step forward."

"Once this is approved by the Senate and signed by the president ... the 4,000 furloughed employees will be reinstated and the construction projects at airports across the country will be able to resume," Naylor says, "and that affects some 70,000 construction workers."

The government, meanwhile, has lost about $30 million a day in airline ticket taxes that haven't been collected since July 23.

"If you figure roughly a two-week shutdown, that's about $420 million the government lost because of this," Naylor says.

Both the House and Senate passed long-term funding bills for the FAA earlier this year, but negotiations on resolving differences and finalizing those bills are stalemated.

"The biggest [holdup] is a provision Republicans want to put in the bill that would reverse a ruling by the National Mediation Board that makes it easier for airline employees to unionize," Naylor says, "so that can gets kicked down the road a bit again."

Under the old rule, workers who didn't vote were treated as "no" votes.

"The House has made it clear that the anti-worker piece is a priority for them and they also put us on notice that they don't intend to give in. So we are bracing for a new fight in September," said Vince Morris, a spokesman for Sen. Jay Rockefeller, Democratic chairman of a committee that oversees FAA.

Last month, in comments to the House Rules Committee and separately to reporters, Mica said the labor provision was the only issue standing in the way of the House and Senate reaching an agreement on a long-term FAA bill. He said Majority Leader Harry Reid has refused to negotiate with Republicans on the issue.

Democrats said they worried that if they give in to Republicans on relatively small items like the subsidy cuts Republicans will be encouraged to demand concessions on the next extension bill, such as the labor provision.

Democrats and union officials say the proposed labor change puts airline and railroad elections under the same democratic rules required for unionizing all other companies. But Republicans say the new rule reverses 75 years of precedent to favor labor unions.

The Republican labor provision has the backing of the airline industry. The biggest beneficiary would be Delta Air Lines, the largest carrier whose workers aren't primarily union members.