Accessibility links
The Music of Louisiana's Angola State Penitentiary The Louisiana State Penitentiary at Angola has been called "the Alcatraz of the South." For most of its 110-year history, its name has been synonymous with brutality, suffering and executions. Yet it also stands out for a different reason: its music. 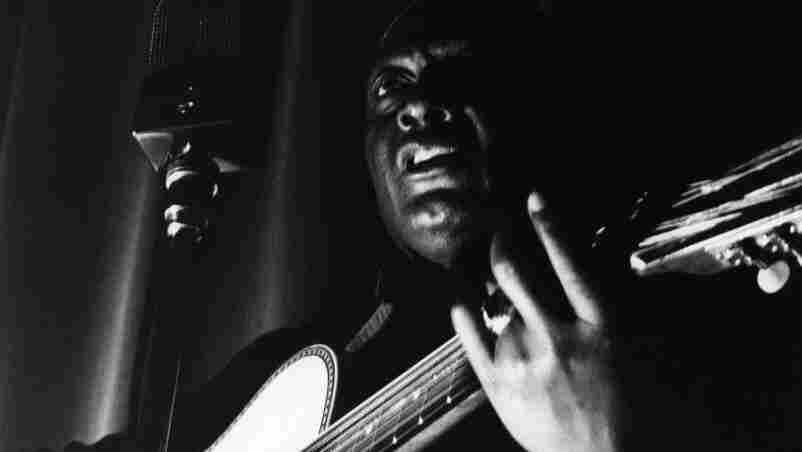 Huddie Ledbetter, aka Leadbelly, was one of Angola's most famous musical inmates. Today, inmates carry on the tradition of channeling the hardship of prison life into song. William Gottlieb/Redferns hide caption 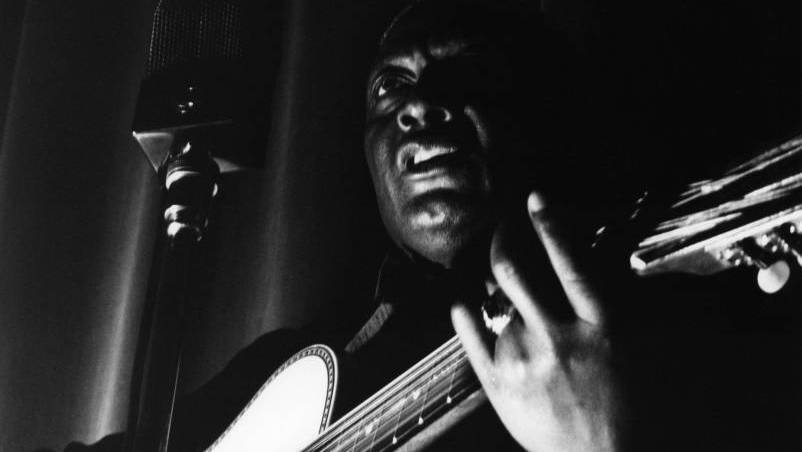 Huddie Ledbetter, aka Leadbelly, was one of Angola's most famous musical inmates. Today, inmates carry on the tradition of channeling the hardship of prison life into song.

It's been called the "Alcatraz of the South." Locals call it "The Farm." The Louisiana State Penitentiary at Angola has been synonymous with brutality, suffering and executions for much of its 110-year history. There was a time when even the most hardened criminals were said to break down and cry when they were sentenced to time there. Yet as prisons go, it stands out for an entirely different reason: its music.

It was one of the first stops for legendary folklorist John Lomax and his son Alan (who was just 18 at the time) when they set off on a year-and-a-half long odyssey on America's back roads in 1933. They were on a mission to gather folk songs of African-Americans, specifically music born of slavery, and they wanted it in its purest form. The elder Lomax believed prison walls were a filter against what he considered the "polluting" influence of popular music.

Angola had been a plantation before it became a prison, and what the Lomaxes found was a plantation-style farming system that had the effect of preserving many of the work songs from the days of slavery. Prisoners worked the fields in large groups and sang together – songs the Lomaxes recorded before they became extinct. It was as isolating and brutal as anything from the Old South, according to Robert Pierce, a former corrections officer and a prison historian.

"It was a place where if you were sent, you worked," Pierce says. "You were segregated. And if you tried to run away, they'd shoot you."

Pierce says that in the institution's pecking order in those days, convicts who could sing held a special status.

"A lot of times encouragement was given by the guards if they knew a particular inmate they knew could sing, and he got special privileges," Pierce says. "And even though they're tough, the wardens they like to show off a little bit. 'That's my singer. He's on my unit.'"

One prisoner in particular impressed John Lomax. His name was Huddie Ledbetter — better known as Leadbelly. As the legend goes, Lomax helped spring him from Angola.

The Walls Break Down

Lomax found all sorts of songs behind prison walls — many going back to slavery days: work songs, love songs, field hollers, blues, religious music. Some of those traditions, like gospel quartets, continue to this day at Angola. Voices in the Wilderness is one of several gospel groups performing in the prison yard on this day. Larry Wilkinson, who's in for 2nd degree murder, is the lead singer.

"As a group we praise God to the utmost and sincerely," Wilkinson says. "So in order for us to sound like we sound, we have to try and walk that walk in a Christian life as positive as we should."

Angola is a different place than it was in John Lomax's day. Prison reforms have improved conditions at Angola and reduced abuses. It's still a prison farm, but tractors have drowned out the work songs and high walls and razor wire can't keep out the popular culture on TV and radio. Angola is no longer a musical time capsule.

Michael Palmer's group performs contemporary gospel in the prison yard. Palmer's serving a 45-year sentence for armed robbery. On the outside, he was a rapper.

"When I was doing gangsta rap, I was just reciting the lifestyle I was living," Palmer recalls, "taking everything I was surrounded by and putting it through music."

Behind two sets of heavy security doors, down the hall from his cellblock, Palmer sings the chorus to one of his old songs.

"People always talkin' bout you a killer, I don't care what you people say, just don't mess with me," he sings. "So it's like I'm threatening: I don't care what you say don't mess with me. But now I'm saying" – he sings the new version of the song as he pounds out a beat on a tabletop – "Satan always talkin' bout you're a Christian. I don't care what the devil says. Jesus died for me." Then Palmer raps, "As I walk through the valley of the shadow of death, I stand strong on my feet. This is only a text. I gotta deny the flesh. I'm a born-again creature. The world not ready for the rap game preacher. So let me teach ya. By renewing your mind. Robbin' and stealin' and killin' – man, you losin' yo mind. Jesus Christ is divine. I salute him like a soldier. And if you're still sinnin', please listen. It ain't over."

From Survival To Success – Behind Bars

A number of prisoners are channeling their experiences through music. These days it's official policy at Angola to encourage creativity – be it singing, crafts or painting. Assistant Warden Kathy Fontenot says it's not just effective prison management — it gives inmates an important tool for survival.

"It's allowing somebody to grow," Fontenot says. "You respect yourself and then start respecting others. And people want to see people come back. I mean, America loves an underdog and that's what we are — a bunch of underdogs."

Daniel Washington is one of those underdogs. He'd learned to play guitar as a child growing up in a small town across the river from New Orleans. After he got to Angola, he wrote a song about the wrong turn his life had taken.

"There was just something about the streets that I was drawn to," Washington says. "I'd hang out all night in the club, livin' like a vampire. When the sun come up, I'm goin' in. When the sun go down, I'm comin' out."

Eventually Washington killed a man — and that's what sent him to Angola. He's been here for 25 years and, like three-fourths of the prisoners here, he's serving a life sentence. In Louisiana that means he's here until he dies — no parole.

He didn't have an easy time during his first years at Angola.

"They locked me up so many times," Washington says. "They took me to Camp J. Camp J is just the harshest punishment that they give you — they send you to Camp J."

It was in his third visit to Camp J that Washington decided to reconnect with his passion for music. This began his climb out of the hole to the point where he became a prison trustee.

"I got into the traveling band, started traveling all over the state of Louisiana — singing in front of crowds doing something that I love doing, Washington says. "Now this is a much bigger step up from where I was at in the cell."

Despite all of the changes since the 1930s, when folklorist John Lomax recorded at Angola, life here is still based on a system of punishment and reward, and one of those rewards is music. For these convicts, it offers their only taste of freedom.

This story was produced by Taki Telonidis of the Western Folklife Center in collaboration with City Lore and with support from the National Endowment for the Arts.