Accessibility links
Movie Review - 'Magic Trip' - High Times With The Merry Pranksters Ken Kesey's infamous LSD-fueled bus expedition of 1964 is faithfully reconstructed by Alex Gibney and Alison Ellwood, using archival footage recorded by the Pranksters and old interviews. But to all but the merriest nostalgists, it doesn't pass the electric Kool-Aid acid test. 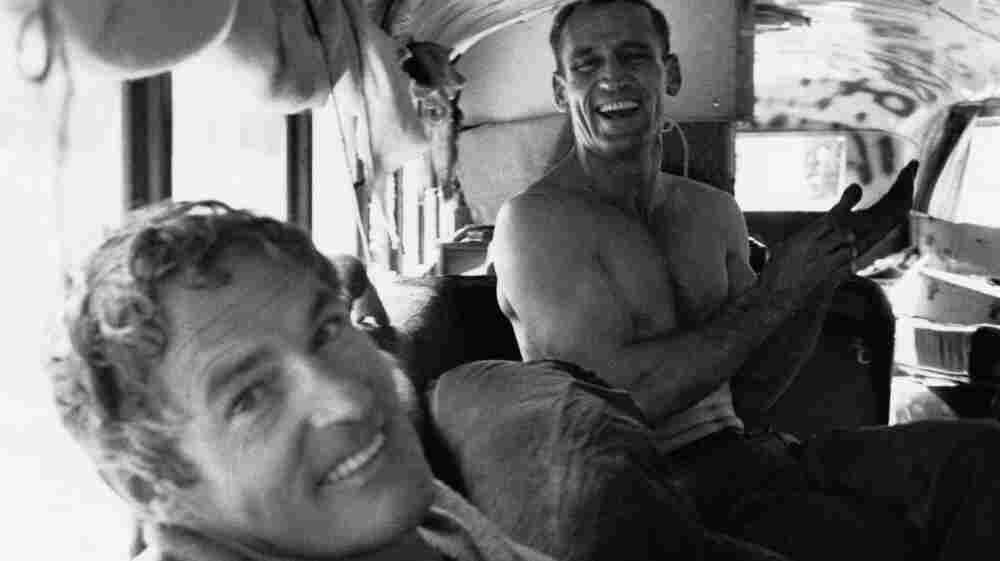 Road Warriors: Timothy Leary (left) and Neal Cassady, the inspiration for Dean Moriarty in Jack Kerouac's On the Road, were two of the Merry Pranksters onboard the psychedelic "Further" bus in 1964. Magic Trip tries to immortalize their journey to a larger extent than the film is able to support. Allen Ginsberg/Corbis hide caption

Rated R for drug content, language and some nudity

'Once I Hit The Pond'

'Once I Hit The Pond'

In the beginning was the word: Tom Wolfe's Electric Kool-Aid Acid Test, published in 1968, evocatively reconstructed Ken Kesey and the Merry Band of Pranksters' cross-country bus trip of four years earlier. The book remains one of the seminal accounts of the decade's social, artistic and hallucinogenic experiments.

Now come the images: Alex Gibney and Alison Ellwood have built a documentary, Magic Trip, from the 16mm color film the Pranksters shot along the way. The rarely seen (and carefully restored) footage looks good, although the lack of synchronized sound gives it a home-movie feel. The travelers did record sound, but it rarely matched the film. So the directors rely on audio interviews with the participants, recorded a decade after the excursion.

For those already somewhat familiar with the subject, the directors' distillation of these 40 hours of film will expand their knowledge — if not their consciousness. But other viewers may spend the whole movie wondering exactly when the merry magic is going to kick in.

The sparse narration, voiced by Stanley Tucci, oversells the significance of what's on-screen. The movie's prologue claims that the Pranksters' journey "changed everything." But surely the tie-dyed escapade was a symptom, not a cause, of the era's burgeoning youth culture.

As Wolfe detailed, Kesey moved through multiple worlds. He was an all-American, small-town boy who became an acclaimed novelist at 27 with One Flew Over the Cuckoo's Nest. He was an early advocate of LSD and other psychedelics, and a patron of the Grateful Dead. And though he considered himself "too young to be a beat," he knew Jack Kerouac, Allen Ginsberg and most of the rest. Indeed, the Pranksters' bus driver was Neal Cassady, the Kerouac pal lightly fictionalized as Dean Moriarty in On the Road.

The Pranksters' own on-the-road venture was roundabout, wandering through Southern climes that within a few years would be considered inhospitable to hippies. Yet the local cops were bemused rather than threatened by the strangers, whose bus was decorated in psychedelic swirls but whose hair and dress wasn't that unusual. At the time, some of the travelers' favorite drugs weren't even illegal; LSD wouldn't be prohibited nationwide until 1968. (Cassady preferred speed, which fueled both his long hours at the wheel and his manic raps.) 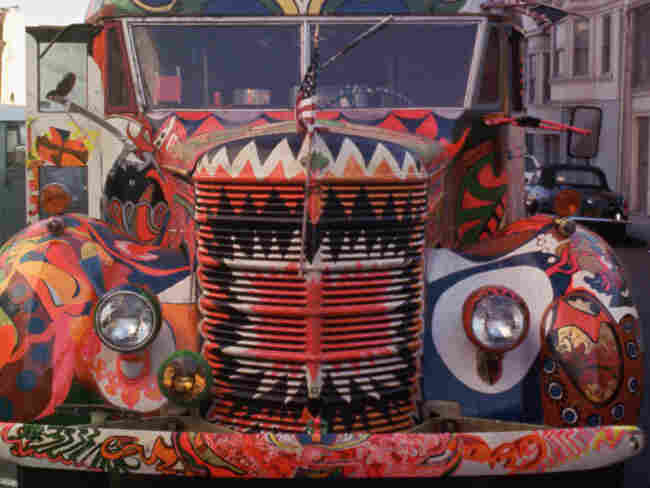 Ken Kesey's bus, "Further," was an emblem of '60s counterculture. Painted by hand (and foot), the vehicle served as a temporary home for Kesey and his fellow hippies. Ted Streshinsky/Corbis hide caption 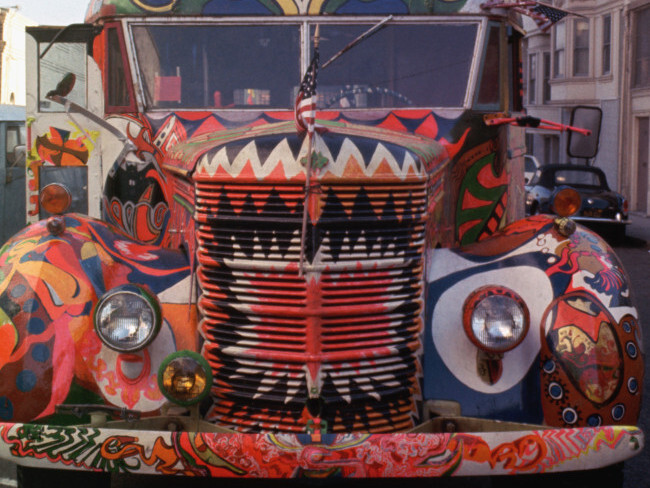 Ken Kesey's bus, "Further," was an emblem of '60s counterculture. Painted by hand (and foot), the vehicle served as a temporary home for Kesey and his fellow hippies.

Many of the Pranksters acquired nicknames that pretty much tell their whole story: Stark Naked, for example, got really stoned and stood nude on the moving bus' back platform, to the delight of truck drivers. Other members of the troupe are similarly one-dimensional. To judge from this account, Kesey wasn't first among equals: He was basically the whole show.

Gibney (whose best documentary is the Oscar-winning Taxi to the Dark Side) and Ellwood (his longtime editor) attempt to get inside the heads' heads with acid-simulating animations. They also interject clips from an LSD-peril episode of Dragnet and Hollywood's One Flew Over the Cuckoo's Nest, and illustrate the period's pop-culture shift with music that moves from silly ("Love Potion No. 9") to trippy ("Timothy's Leary's Dead").

It takes more such allusions, however, to conjure a fresh vision of the much-pondered 1960s. In the Pranksters' footage, Magic Trip does have something new. But the movie fails to make the cross-country jaunt function as a metaphor for the country's mid-century passage. Minus that, the Pranksters' everything-changing adventure looks a lot like just another road trip.