Accessibility links
In Bolivia, Strollers Compete With Baby Slings Today, some young people in Bolivia have mixed feelings about carrying their babies in traditional bundles, known as aguayos. They want to be considered more Western, or "modern," and would rather push strollers. But it's causing tension with their mothers, who say they're abandoning indigenous tradition. 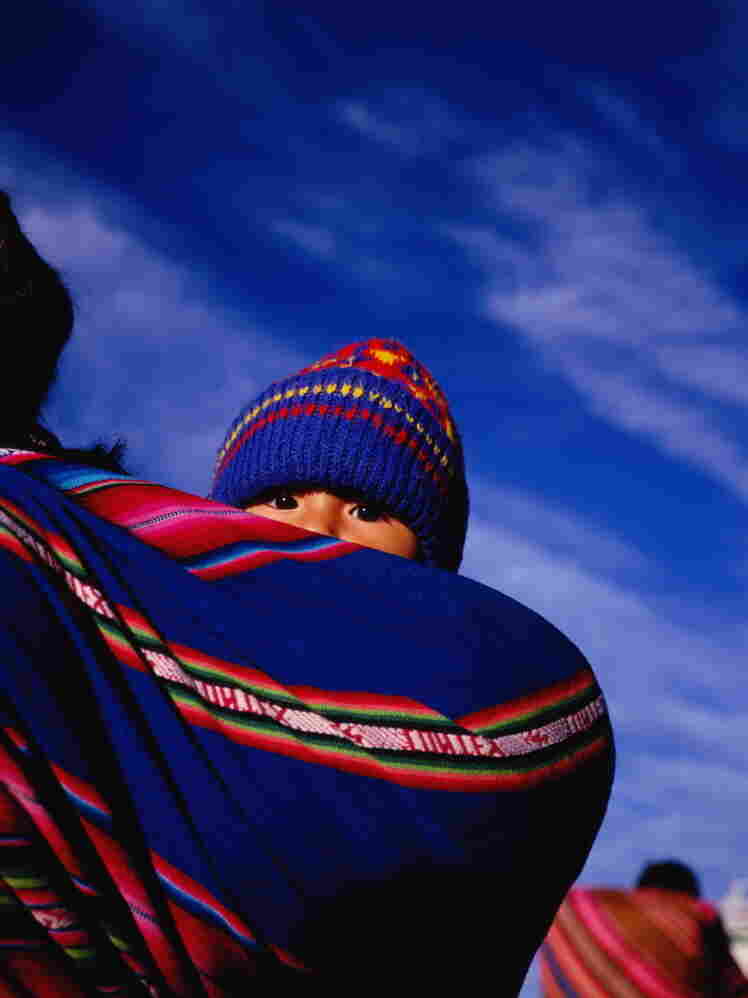 A young child wrapped in an aguayo, a traditional sling, on mother's back in La Paz, Bolivia. Anthony Cassidy/Getty Images hide caption 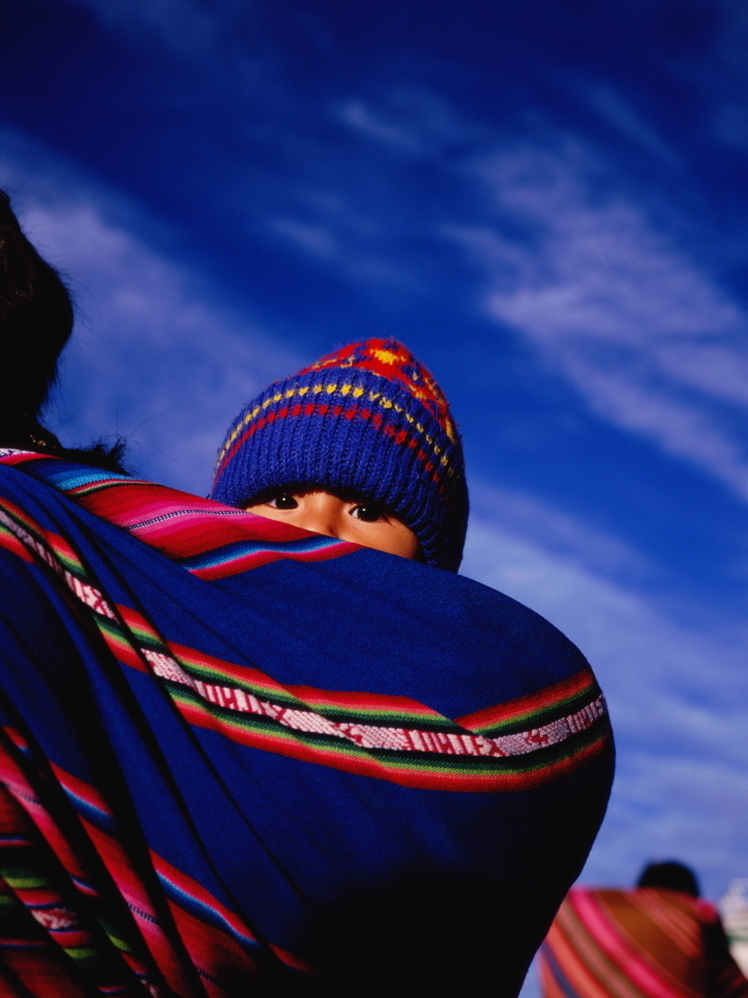 A young child wrapped in an aguayo, a traditional sling, on mother's back in La Paz, Bolivia.

In the U.S., fabric baby slings that carry an infant close to a mother's body are increasingly popular.

Indigenous Bolivian women have been using the technique for centuries — and many embrace it as a connection to their past.

But today, some young women in Bolivia have mixed feelings about the bundles, known as aguayos, and sometimes they cause tension between mothers and daughters.

A Desire To Be 'Western'

When Lourdes Condori, 25, found out she was pregnant with her son, Kevin, she decided she didn't want to carry him in an aguayo — the colorful Andean weaving that indigenous Bolivians use to carry everything from groceries and clothing, to babies.

"For young people, going out in the street with an aguayo on your back is looked down on," she says. "Even now, a lot of people prefer to put their baby in a stroller, because it's better received than an aguayo."

That's because in La Paz, carrying an aguayo marks people as indigenous — and Condori wants to be considered more Western, more "modern."

Inside the aguayo, you carry coca leaves, food, something to drink. The aguayo is always nearby.

Condori proudly shows off the stroller — a secondhand blue canvas one. But the surrounding neighborhood is full of puddles and potholes, no sidewalks, and a lot of stray dogs — not good terrain for a stroller.

It takes almost 10 minutes just to get it out of Condori's house, with lots of lifting and some three-point-turns.

Patricia has spent most of her life working as a maid, and she believes it's more practical to carry a baby on your back.

Still, Condori is stuck with the stroller, for a while. Not only was it more modern — she felt it was safer, too.

"I had my baby via cesarean," she says. "Carrying him around a lot made the scar hurt."

But eventually her baby, Kevin, started to crawl. It became impossible for Condori to do housework while keeping track of him. So, she tried out the aguayo.

"I was afraid to use the aguayo, I didn't know how," she says. "The first time I tried, he ended up facing down, with his feet where his head should've been. But my mother has been helping me learn, and it's gotten better."

Not Just For Babies

Patricia boils water for tea. She believes shunning the aguayo would be like ignoring the family's indigenous roots.

She tries to explain why by attempting to show how the intricate aguayos are woven, using a scrap of yellow string and a spoon. According to Patricia, the finished aguayo will become a part of family life.

Then Patricia gives up on weaving, and insists on watching one of her favorite movies.

The family, including the kids, crowd into Patricia's bedroom. The bedroom has a low ceiling and is made of concrete. It's full of mattresses and blankets and aguayos everywhere — and a heavy old TV.

The movie tells the story of how a young indigenous couple fall in love. And it culminates in a huge wedding. In the film, almost every woman is carrying an aguayo. It's not just used for babies.

"Inside the aguayo, you carry coca leaves, food, something to drink," Patricia says. "The aguayo is always nearby."

After the movie, Condori explains that while she's not willing to give up the stroller, she believes she can carry her baby in an aguayo and also be modern.

"The stroller isn't as comfortable as the aguayo, but the stroller can be good for going around the block, " she says. "I use both."