Accessibility links
Heat Wave Tests Muslims During Ramadan In many parts of the U.S., it's hot. People are thirsty. But if you're Muslim, you can't drink from sunup to sundown during Ramadan. A comedian, an athlete and two imams describe how they cope without water — and coffee and soda. It's a "fight, trying not to grab a pop out of the refrigerator," one says. 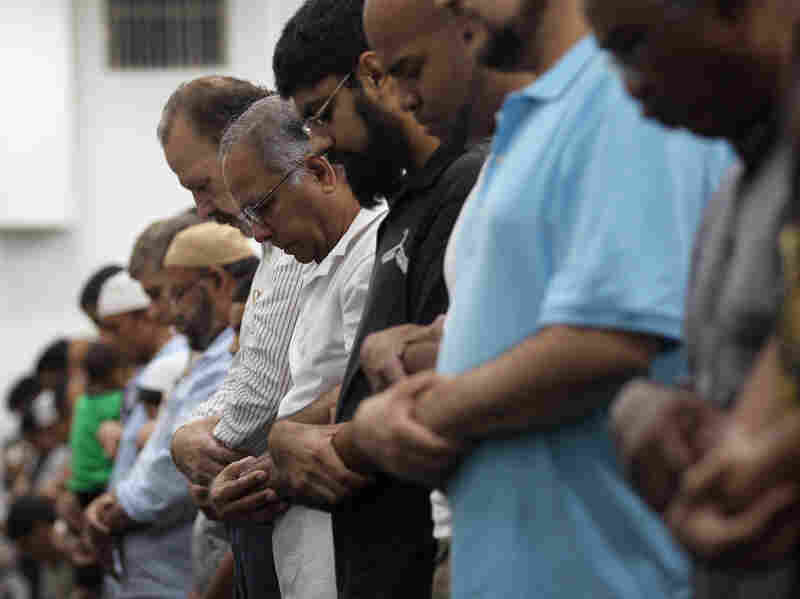 Muslims pray together on the evening of the first day of Ramadan at the Islamic Center of Greater Miami. Joe Raedle/Getty Images hide caption 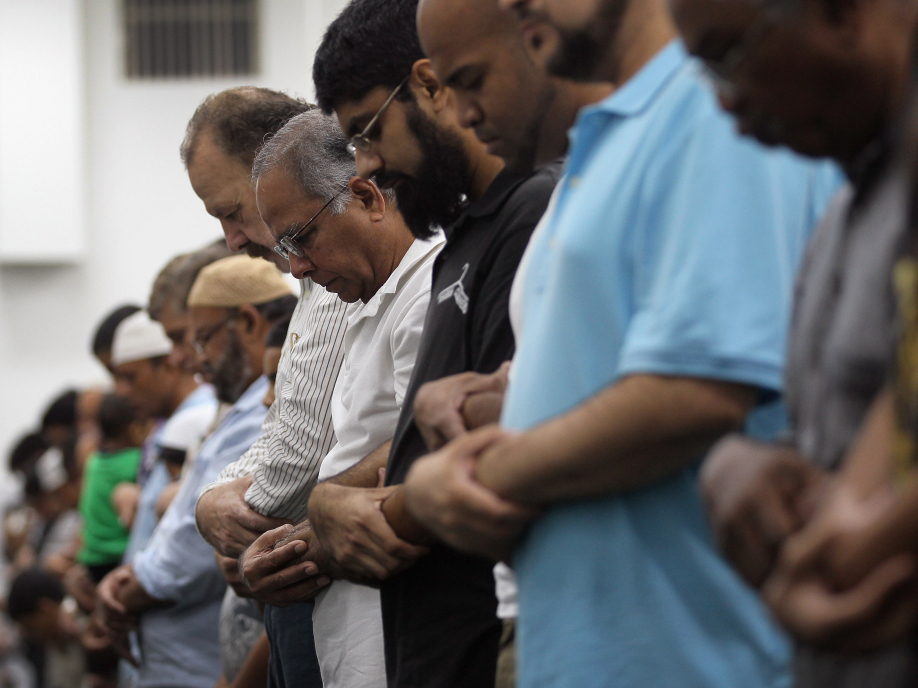 Muslims pray together on the evening of the first day of Ramadan at the Islamic Center of Greater Miami.

As a heat wave grips large parts of the country, ask yourself this: Would you turn down a glass of water? If you're Muslim, you probably would, because it is the month of Ramadan, when Muslims can't eat or drink from sunup to sundown.

It's a bit of a challenge, says Omar Shahin, an imam in Phoenix. At that moment, it was 105 degrees outside, and he was cleaning the pool in his backyard. The water was so close, yet so far.

"There is water in front of me and nobody around," he says with resignation. "I can do it without anybody see me drinking. At the same time, I am controlling my desires. I am obeying the God, even when there is nobody around."

The cleric says he's been besieged with questions by members of his mosque — landscapers, construction workers, cooks who work in hot kitchens. They ask what to do if they need to drink during the day. And Shahin thinks back 20 years, to when he was working with contractors who were building his house in Jordan.

"It was maybe at 2 p.m.," he recalls, "and I was exhausted. I cannot even breathe because of lack of water. So right away I called my imam, and he said, 'Go ahead now and break your fast.' I never forgot that."

So Shahin tells the congregants: Go ahead, drink something: You can fast later in the year, when it's cooler; the same goes for pregnant women, or people who are ill.

But the vast majority are like Abdul Khafid. Khafid went by his given name, Eric Monroe, when he played basketball for the Houston Rockets. He competed against men who had plenty to eat and drink before the game, and it was then that he realized the meaning of jihad — an internal struggle.

"That's what I call jihad," he says, laughing. "That's a fight, trying not to grab a pop out of the refrigerator, and say, 'Forget this fast, I'm going to go ahead and drink and eat right now.' "

Khafid was trying to establish himself in the NBA, and when he was tempted, he turned to his teammate, Hakeem Olajuwon. The superstar gave him some perspective, Khafid recalls, telling the young player, "What if you don't make the NBA? What if your dream doesn't happen? Remember, this is a blessed month of Ramadan, where you get closer to God — not closer to the NBA."

After that, Khafid would just "man up."

He says he realized, "This is just basketball. I'm just a little tired, a little thirsty and a little hungry. And this is for the sake of God. And so — I don't know how to explain it, but it's like an inner power that comes from above."

Stand-up comic Mohammed Amer's work isn't quite as aerobic, but he has a physical style — lots of gestures, lots of voices — and for 11 months of the year, his water bottle is practically glued to his hand. Along comes Ramadan, and there he is, going on stage when everyone else is sitting down to dinner and drinks.

"I look forward to Ramadan," he says. "I know it's a test, and it's supremely important that I do it, mostly because I'll go to hellfire if I don't! I mean, it's really important if you believe in Islam! No, I'm kidding."

For Johari Abdul Malik, it's not water that he craves. It's his daily soy green-tea latte with a shot of espresso. And Malik, a Virginia cleric, says it's not just Muslims who feel the effects of fasting. He recalls running into a barista from the Starbucks near his mosque at this time last year.

And they arrived, the minute the sun went down.