Accessibility links
Rick Perry's Religious Revival Sparks A Holy War The Republican Texas governor, who is widely expected to enter the race for the White House, says Saturday's event is nothing more than a Christian prayer rally. His critics, however, say it is Jesus-exclusive and political. The event is sponsored by an organization that some consider a hate group because of its anti-gay agenda. 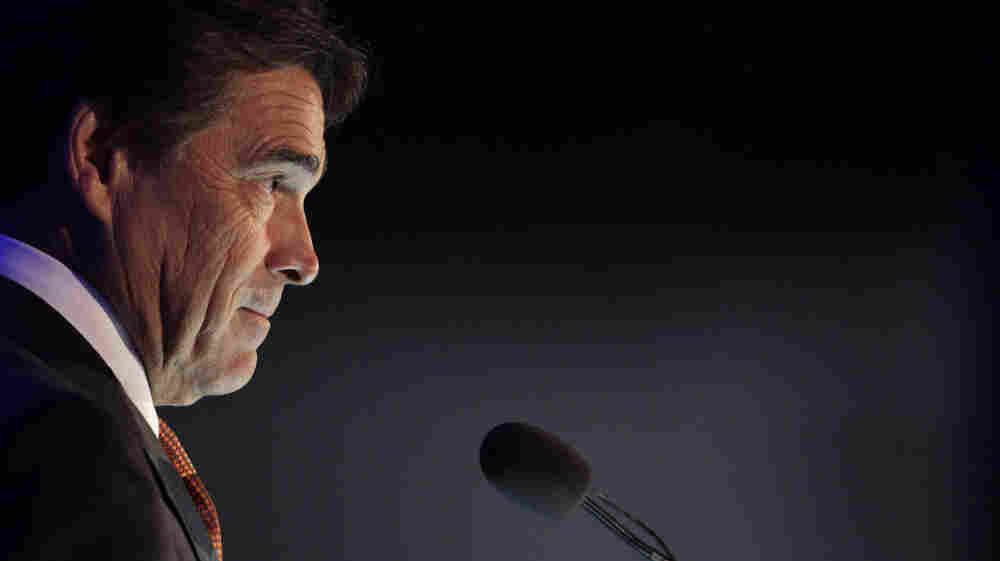 Texas Gov. Rick Perry looks on during a speech at a Boy Scout ceremony in June aboard the USS Midway in San Diego. At that dinner, he said the federal government is rudderless. Now, he's calling for a "day of prayer and fasting on behalf of our nation." Gregory Bull/AP hide caption

Rick Perry, the longest-serving governor of Texas, is a Methodist by tradition who, with his wife, Anita, now attends an evangelical megachurch in Austin. He is open about his deep Christian faith.

On Saturday, Perry, who is widely expected to enter the race for the White House, is hosting a religious revival in Houston to pray for what he calls "a nation in crisis."

While the governor claims it's nothing more than a Christian prayer rally, the event has touched off a holy war among critics, who claim it is Jesus-exclusive and political.

Late last year, shortly after he won his third term, Perry, a Republican, began to envision the event that is now called "The Response."

"With the economy in trouble, communities in crisis, people adrift in a sea of moral relativism, we need God's help," he said. "And that's why I'm calling on Americans to pray and fast like Jesus did."

An event spokesman, who is a former Perry speechwriter, says the daylong affair will be filled with prayer, inspirational messages, Scripture readings and praise music. More than 8,000 people have registered for the prayer rally, which is being held in the 71,000-seat Reliant Stadium, normally used for rodeos and NFL games.

Perry invited all his fellow governors. The only one to accept was Sam Brownback of Kansas, but he is now backing away. His office says Brownback is "on vacation," and if he goes, "it's at his discretion and on his dime."

Among prominent religious leaders expected to speak: James Dobson, founder of Focus on the Family and now a radio broadcaster; Richard Land of the Southern Baptist Convention, and Tony Perkins of the Family Research Council. Perry is not scheduled to address the crowd.

Other names on the list of coordinators and endorsers have raised eyebrows.

"I mean, when you talk about the religious right, this is the fringe of the fringe here," says Dan Quinn, communications director of the Texas Freedom Network, an Austin-based watchdog group that tracks the far right in Texas.

"This is clearly, when you look at it, religious extremism and naked partisan politics," Quinn says. "I think it's one of the most cynical displays of using faith as a political tool we've seen in a long time."

This is clearly, when you look at it, kind of a combination of religious extremism and naked partisan politics ... I think it's probably one of the most cynical displays of using faith as a political tool that we've seen in a long time.

The event is being paid for by the American Family Association, which describes itself as being "on the frontlines of America's culture war." The Southern Poverty Law Center characterizes the AFA as a hate group because of its fierce anti-gay agenda.

-- John Hagee, a San Antonio evangelist whose endorsement was rejected by John McCain in 2008 because of Hagee's anti-Catholic statements.

-- Mike Bickle, a founder of the International House of Prayer in Kansas City, Mo., who has called Oprah Winfrey a "pastor of the harlot of Babylon."

-- Alice Patterson, founder of Justice at the Gate, in San Antonio, who has written that there is "a demonic structure behind the Democratic Party."

-- And then there's John Benefiel, head of the Oklahoma-based Heartland Apostolic Prayer Network, who once said this about the Statue of Liberty: "You know where we got it from? French Freemasons. Listen, folks, that is an idol, a demonic idol right there in the middle of New York Harbor."

A Rush To Judgment?

The gathering in Houston appears to some observers as an early attempt to line up the support of conservative evangelicals for Perry's expected presidential run. The event's executive committee includes religious/political activists David Lane and Jim Garlow, as well as Wayne Hamilton and David Barton, both former officials of the Texas Republican Party.

But wait, organizers say: Don't condemn an event before it happens.

"We do need to come together, and pray, and to seek the Lord on behalf of our nation," says Doug Stringer, who runs a Christian world outreach ministry in Houston called Somebody Cares. "If we can do that without being against anything, then I [am] pleased to be a part of it."

Stringer says he agreed to be an organizer if they guaranteed there will no long-winded sermons or political speeches.

"And so as a result, they've allowed me to be a prayer captain, and if anything goes off-track to where I feel it should be focused on the Lord and prayer and worship, I can come to the microphone and kind of give redirection to it."

Yet "The Response" remains divisive.

Earlier this week, 50 Houston religious leaders, led by the Anti-Defamation League, signed a letter expressing their concern that the Texas governor, and possible presidential candidate, is "sending an official message of religious exclusion" to non-Christian Texans.

An event spokesman insists that everyone is welcome.

The audio and a previous Web version of this story incorrectly identified James Dobson as being "of Focus on the Family." Dobson was the founder of that group but is no longer associated with it and is a Family Talk radio broadcaster.