Accessibility links
Jobs Report Is Bright Light, But We're Still In Tunnel Hiring picked up slightly in July, and the unemployment rate dipped to 9.1 percent. But the news failed to calm stock markets a day after the worst showing on Wall Street in nearly three years. 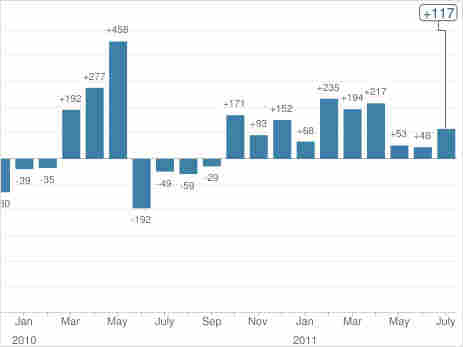 The U.S. economy churned out more jobs than expected last month, and the unemployment rate ticked lower, although Wall Street continued to whipsaw a day after its worst showing in nearly three years.

Employers added 117,000 new jobs in July, the Labor Department reported Friday. That's far better than the 90,000 jobs that analysts had forecast, and a big bump up from the revised estimate of 46,000 created in June. The private sector created 154,000 jobs across a range of industries, which helped offset thousands of government jobs lost due to layoffs.

"With the financial markets in such turmoil, this number became very important," said Brian Wesbury, chief economist at First Trust in Wheaton, Ill. "It's good news. It will settle the markets and remind everyone that the economy has been growing — not booming, but still growing."

The monthly unemployment rate fell to 9.1 percent from 9.2 percent in June — but that was partly because some people who are unemployed stopped looking for work.

Although the government reports showed mild gains, the job growth isn't where it needs to be for a strong economic recovery.

President Obama, speaking at Washington's Navy Yard on Friday, acknowledged that it had been "a tumultuous year" for the economy. He also pointed out that the U.S. had added jobs for the past 17 consecutive months.

"Things are going to get better," Obama said as he challenged Congress to act swiftly to push through new economic initiatives.

The stock markets certainly didn't take kindly to Friday's news at first. The Dow Jones industrial average shot up more than 150 points after Friday's opening bell, then drove deep into negative territory but had rebounded as of mid-afternoon and closed slightly higher. The index plummeted nearly 513 points Thursday amid concerns that the U.S. may be entering another recession. International markets saw similar sell-offs overnight.

William Dickens, an economist at the Brookings Institution, said that overall, the July jobs report looks "pretty weak" and that 200,000 new jobs a month are needed to do anything to really reduce unemployment and bring the economy into a steeper recovery.

One of the problems, he said, is that the Federal Reserve is largely hamstrung, with few options left to stimulate the economy.

"They've pretty much emptied all the chambers in the gun," Dickens said, adding that what's needed, in his opinion, is "a trillion in new stimulus directed right at the states."

Austan Goolsbee, chairman of the White House Council of Economic Advisers, said the economy has a long way to go, but that the report was "at least a breath of encouragement."

"We aren't in that moment when we were losing 800,000 jobs a month," he told NPR, referring to the first days of the recession. Coincidentally, Friday was Goolsbee's last day on the job before returning to academia.

Governments cut 37,000 jobs last month, 23,000 of which were tied to the state government shutdown in Minnesota.

Even so, the economy expanded at a meager 0.8 percent annual rate in the first half of the year, the slowest pace since the recession officially ended in 2009. Those figures, combined with financial troubles in the eurozone in recent days, have ratcheted up talk of a double-dip recession and put markets on edge in the past week.

"If Europe gets its act together and we don't have any more brinkmanship in the political arena here, I can see us just limping through without a double-dip recession," Dickens said.

But the unemployment rate fell because some unemployed workers stopped looking for work. That means they are no longer counted as unemployed. As a result, the number of unemployed people fell to 13.9 million, down from 14.1 million. Still, that's nearly double the total before the recession.

The participation rate, which measures the percentage of people working or searching for jobs, fell to 63.9 percent — the lowest in 27 years.

"There are a lot of people here that have been out of work for quite a while, and their skills are not matching up with the kind of positions that people are looking for," said Stephen Bronars, a senior economist with Welch Consulting in Washington, D.C.