Accessibility links
Summertime Politics: Bring Out The Flip-Flops Flip-flops in Iowa keep cropping up like spent corncobs. The recent national debt crisis brought out rampant charges of flip-flopping, too. What's behind all the charges of changeovers? A look at the storied history of the political about-face and what it says about our national character.

Summertime Politics: Bring Out The Flip-Flops

Summertime Politics: Bring Out The Flip-Flops 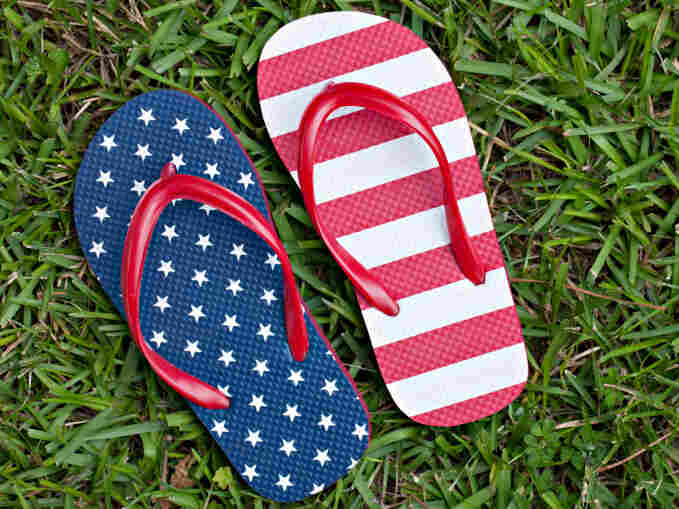 As the dust settles from the recent Republican debate and straw poll in Iowa, flip-flops keep cropping up like spent corncobs. In the debate, Newt Gingrich "was asked about his position on military action against Libya," the St. Petersburg Times reported. "We explored whether he flip-flopped and rated it Full Flop."

The recent national debt crisis brought out rampant charges of flip-flopping. A Washington Post editorial accused former Virginia Sen. George Allen, who hopes to retake the seat he lost in 2006, of a "cynical flip-flop" in his approach to raising the debt-ceiling. In a news release, Idaho Democrats rapped the knuckles of Rep. Raul Labrador (R-ID) — the only Idaho congressman to vote "no" on raising the debt limit — for his "history of flip-flopping." A recent McClatchy headline read: "Flip-Flops the Norm on Debt Limit."

Pointing fingers at flip-floppers is not confined to the debt-ceiling debate, however. Sarah Palin on Fox News recently: "Well, you know, that's the hypocrisy that I guess is inherent in this politics-as-usual from these Washington, D.C., characters. They say one thing as candidates. And they get elected and they do their little flip-flop there, with Harry Reid, as you just mentioned, saying that he was for a balanced budget amendment."

And Al Sharpton on MSNBC: "Newt Gingrich will try to flip-flop out of any situation by saying he's been misconstrued."

There are sure to be more charges of changeovers in the coming days..

Political flip-flopping — and accusations thereof. It's a practice that's as American as apple ... turnovers.

The term flip-flop, meaning a political reversal, has been a fixture in popular American parlance at least since the 1880s. A New York Tribune writer in 1888 called out President Grover Cleveland for his "Fisheries flip-flop," presumably referring to Cleveland's handling of the fishery treaty that governed waters shared by American and Canadian vessels and perhaps making wordplay on the way fish flop and flip on a boat deck.

And in 1892, the New York Times pointed to the "flip-flop antics" of John Boyd Thacher, the once-and-future mayor of Albany.

"Flip-flopping has a noble history in this country," wrote Jonathan Darman in Newsweek in 2008. "In his first run for the presidency, Abraham Lincoln vowed not to force the end of slavery in the South. But by his second inaugural, he could swear that, God willing, 'every drop of blood drawn with the lash shall be paid with another drawn by the sword.' "

Darman's incisive essay was pegged to then-presidential candidates Barack Obama (who changed his mind on campaign financing) and John McCain (who did an about-face on offshore drilling).

Contemporary politics is alive with examples of flip-floppery. John Kerry's statement in 2003: "I actually did vote for the $87 billion before I voted against it." Mitt Romney is often called a flip-flopper because of his range of views on health care. And earlier this year, Newt Gingrich reportedly said he thought the U.S. should be involved in Libya and then a couple of weeks later said he didn't think the U.S. should intervene.

And if you Google the phrase "Political Flip-Flopping," you can find a mess of essays that defend — and decry — political pirouettes. How we feel about elected officials doing 180s — apparently we are split — says something about our national character.

Doug Wead, a presidential historian and former adviser to President George H.W. Bush, takes the idea of flip-flopping all the way back to the Bible and to the sometimes-shifting morality of kings and queens. "Throughout history," Wead says, "governments liked to keep their subjects guessing about the meaning of their laws and thus under control."

But "the early pilgrims were weary of it all and had suffered under the uncertainty of a Catholic or Protestant regime when the wrong choice could mean death," he says. "In fact, the [George] Washington family came to Virginia when Cromwell came to power, and all of their generations of investing in a relationship with the crown was for naught."

As a result, Wead says, the Founding Fathers set out to protect the American people and the country's political system from "the fickleness of government and to provide some continuity and to make change less arbitrary and more advised with the three branches of government riding herd."

He adds, "In a sense, the repulsion over flip-flopping is built into our national psyche."

No, Wait — Flip-Flopping Is Good

And yet we tolerate flip-flopping. Even sometimes defend it.

"A politician may be able to survive cavorting with prostitutes, sexting with coeds and commingling with interns, but heaven forbid he should change his mind — the transgression that trumps all compassion. Or thinking," Washington Post columnist Kathleen Parker wrote in "A Defense of Flip-Floppery" in June.

Lynn Vavreck, a political science professor at the University of California, Los Angeles, posted a video on YouTube during the last presidential campaign in which she says political flip-flops are "not necessarily a bad thing." "As voters, we value stability," Vavreck says. "We like to know that candidates have had the same issue positions, and we call a change in issue positions a flip-flop and that has a negative connotation."

But in many other aspects of our lives, "we expect people to learn and update as new information gets revealed. You certainly wouldn't want your doctor not to learn the latest cancer therapy. Or your dentist not to buy the newest equipment to minimize pain when he drills," Vavreck says in the video. "So, as professional politicians and professional policymakers enact policies, experiment with policies ... as we try things and information is revealed about how successful those policies are, what work they do, what other unintended consequences they might have, we should expect them to update."

She does draw a line on fundamental things: beliefs, values, core descriptions of ideology. "But in terms of the way we solve problems," she says, "we certainly should expect our politicians to learn as information is revealed about the success, or the failure, of policies that are experimented with."

Today, Vavreck says flip-flopping and political evolution can go hand-in-hand. "We want, after all, our politicians to learn from failed attempts to solve problems," she says. "But relentless or serial flip-flopping that is tied to electioneering is different than authentic changes in ideas."

She says, "There's nothing wrong with updating after trying a policy out; but that's different from posturing to get elected."

Vavreck believes that most people want an elected representative to have total certainty about the issues. "Of course, this is impossible," she says. "But when we see a candidate or politician saying they aren't sure about something, we think that is a sign of weakness. The problem resides equally with voters as well as candidates."

So flip-flops can be good, Vavreck says.

But even Wead admits that there are instances in which flip-flops can work for the flip-flopper. "In 1986, as he contemplated a run for president, George Herbert Walker Bush changed his mind over a constitutional amendment to ban abortion," Wead recalls. Up until then, "it was his only high-profile flip-flop, and he was in anguish over the idea of flip-flopping more than the decision on abortion."

Wead says, "I was there when it happened and was writing memos about it leading up to his moment of decision. In this case, his 'change' in position worked for him and actually helped him get elected by winning evangelical voters on Super Tuesday."

But another about-face did not serve Bush well. Accepting the 1988 Republican nomination, Bush told the American people to "Read my lips" and he promised "No new taxes." He won the election.

As president, however, Bush did raise taxes. And that flip-flop contributed to the ascendancy of Bill Clinton in 1992.