Accessibility links
'Attack The Block' Serves Up Gorilla Aliens With A Side Of Moral Quandary A new British sci-fi thriller wants you to question your allegiance to the criminals who defend Earth against an alien invasion. 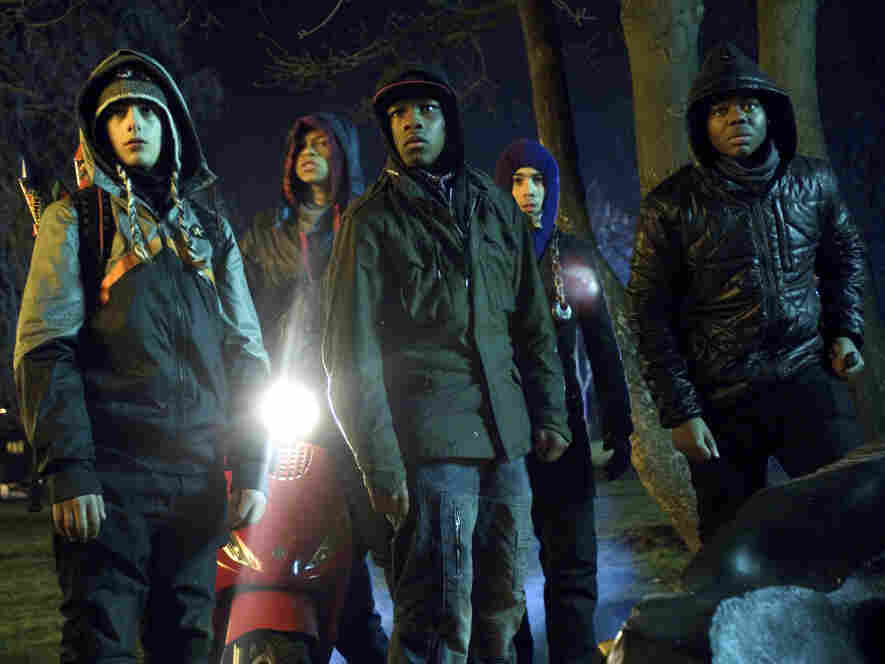 The fate of the world rests on a group of neighborhood toughs in a South London apartment building in Attack The Block. Their leader, Moses (John Boyega, center), robs a defenseless woman in the film's first scene. Sony Pictures hide caption 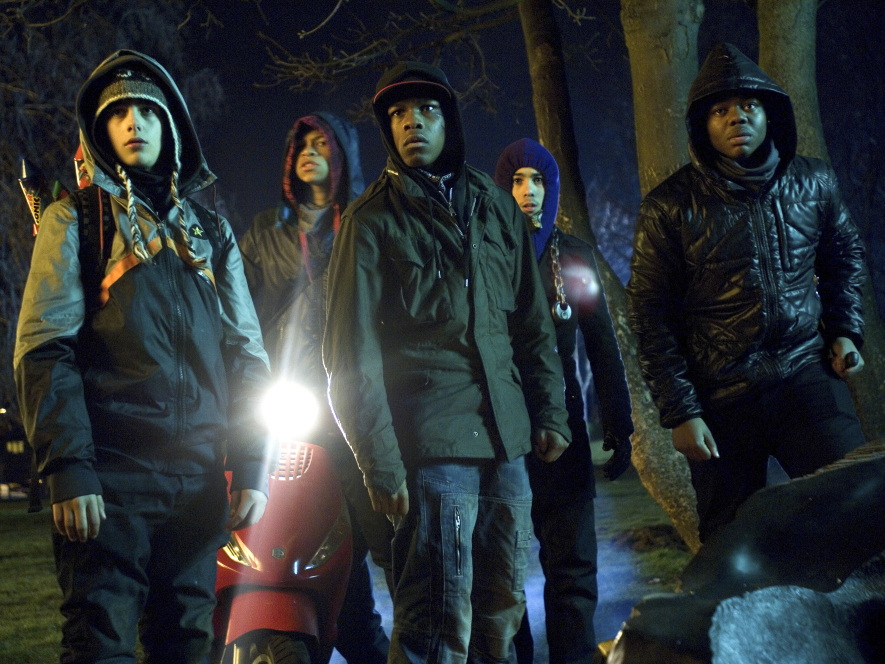 The fate of the world rests on a group of neighborhood toughs in a South London apartment building in Attack The Block. Their leader, Moses (John Boyega, center), robs a defenseless woman in the film's first scene.

When we first meet Moses, the hero of Attack the Block, we're supposed to hate him. This is before gorilla-like aliens with glowing fangs swarm his London housing project and before he becomes the reluctant leader of the resistance. This is when he's just a teenage thug with a gang of friends, attacking a woman on the street.

In fact, this is before we even know his name is Moses. The movie — which is written and directed by Joe Cornish and co-produced by Edgar Wright (Hot Fuzz, Scott Pilgrim vs. the World) — opens on a chipper young nurse named Sam (Jodie Whittaker) walking home from a Tube station. She turns down an empty street and discovers a gang of teenagers on bicycles, hoods pulled up and bandanas over their faces. They surround her, pull a knife, and rob her. Sam is terrified, and because we never see her attackers' faces — just their young, angry eyes — we're encouraged to demonize them, too.

Even when an alien pod interrupts the robbery by crashing into a nearby car, the thugs stay aggressive, hollering for its head. Even when the alien gets violent and Moses (John Boyega) knocks it unconscious, it's hard to admire him, since that's when we realize he was the one with the knife.

This is where Attack the Block begins asking difficult questions: When do good actions excuse bad ones? When can villains become heroes? How hard is it to radically alter our first impressions of a character? Of a person?

I love this movie, which opened last weekend in limited release, because it refuses to let those questions drop.

Plot-wise, it's a typical human v. aliens picture, complete with surprise deaths, bleak humor, creatures crashing through walls, and characters roaming terrified in the dark. Moses fits the standard hero template, and as they fight, he and his friends exhibit deep loyalty to each other and their neighborhood. We also get clues about their hard-knock backgrounds: In one scene, the boys theorize that the government sent the aliens to their housing project, which suggests how lost they feel in their lives.

In the midst of these brave acts and sympathetic monologues, you could forget how Moses was introduced. Except that Sam (the nurse) also lives in his building, and they eventually have to join forces. So even as he's standing up for his community, Moses is shadowed by proof that he's not just the victim of aliens and hard times. When one of the boys tells Sam that they'd never have mugged her if they'd known she was a neighbor, she doesn't tear up like he wants her to.

I don't want to make Attack the Block sound like a turgid treatise, though. Its ideas work because they're threaded through a muscular action story. I didn't fully comprehend its moral ambiguity until the credits were rolling and I'd caught my breath. I was too busy cheering for the characters, especially after the ending suggested that the world outside Moses' block would never see the goodness beneath his criminal life. I left the theatre forgiving Moses' wrongs. It was a window into my attitudes about crime.

Not everyone agrees with me. In The San Francisco Chronicle, Mick LaSalle excoriates the movie, saying, "If you're going to show people imperiled by aliens, make us care whether said people live or die. Or at the very least don't make your audience actively root for the aliens by showing your ostensible heroes mugging a young woman at knifepoint in the movie's first scene."

I don't share his opinion, obviously, but I understand where it comes from. To me, it's a testament to Attack the Block's success that it can provoke both responses at once.