Accessibility links
Fighting Decline, Micronesia Creates Shark Sanctuary Micronesian islands have declared vast areas of the Pacific Ocean to be a sanctuary for sharks. The predators are losing numbers because they are being over-fished – mostly to feed an insatiable appetite for shark-fin soup in Asia. 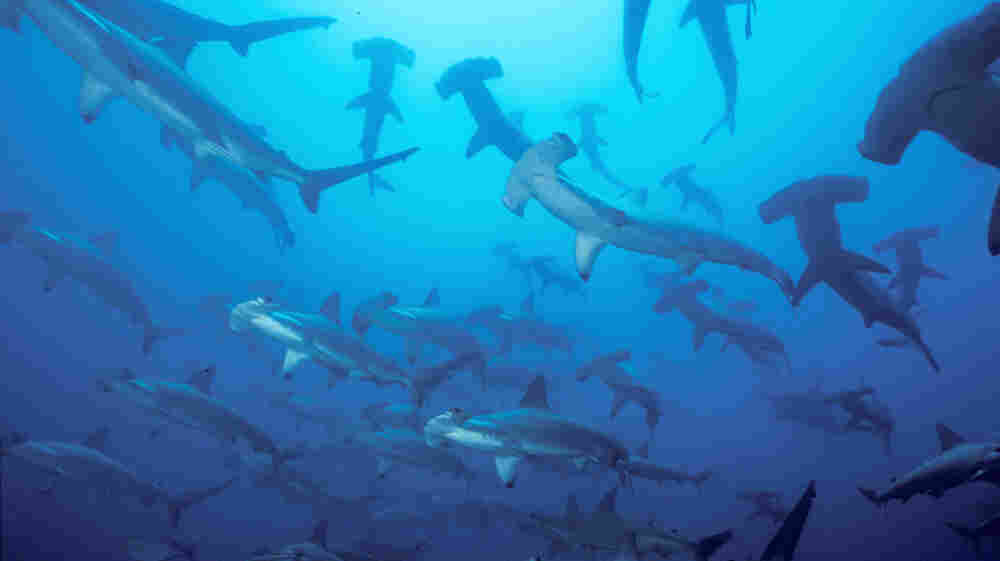 The move by Micronesian islands to create a shark sanctuary two-thirds the size of the U.S. is the latest in a series of shark preservation areas aimed at reviving declining populations. Above, a group of hammerhead sharks swim in the Pacific Ocean off the coast of Malpelo in this undated photo. Yves Lefebre/AP hide caption

Micronesian islands have declared vast areas of the Pacific Ocean to be a sanctuary for sharks. It's the latest move in a trend to create zones where sharks can live undisturbed.

These top predators are in serious decline around the world because they are being over-fished. Mostly, they are caught to feed an insatiable appetite for shark-fin soup in Asia.

This conservation strategy effort started out small. Two years ago, the tiny Pacific nation of Palau declared its territorial waters a shark sanctuary. Next came the Maldives in the Indian Ocean. This June, Honduras said it too would ban shark fishing in its waters. And last month the Bahamas followed suit.

But nothing tops what just happened out in the southwestern Pacific, where islands in Micronesia, including Guam and the Marshall Islands, have said they would ban shark fishing in more than 2 million square miles of their waters.

We're talking about an area two-thirds of the size of the continental United States. That is a significant safe-haven for sharks.

"We're talking about an area two-thirds of the size of the continental United States," says Matt Rand at the Pew Environment Group. "That is a significant safe-haven for sharks."

Pew has been working behind the scenes to create these shark havens. Rand says Micronesia's declaration is a huge step forward. And these nations aren't simply doing it because they care about nature. It's also about money.

"From an economic perspective, dive tourism is growing," Rand says, "and there's significant interest from divers to see sharks. It's the pinnacle of a dive when you get to see a shark in the open ocean."

Economic studies suggest a single shark can be worth more than $1 million to a local tourism spot. And protecting sharks also means protecting the rich marine life of the reefs where they live.

"It's very analogous to removing lions from the Serengeti or wolves from Yellowstone," Rand says. "When you remove the top predator you disrupt the whole balance of the marine ecosystem."

Sick reefs mean no scuba divers, no Mai Tais under the palm fronds, and empty hotel rooms. There are places in the world where that's already the case, says Boris Worm, from Dalhousie University in Halifax, Nova Scotia.

"When you go a place like Indonesia, where I was last year, it's basically shark-free over large areas," says Worm. "These places used to teem with sharks and they certainly don't anymore."

Worm says sanctuaries are a promising way to help reverse that trend. When he was in Indonesia, for example, he visited a refuge where shark fishing was banned about five years ago.

"You do see signs of recovery," he says, noting "more juvenile sharks, small sharks coming up in numbers. This made me very hopeful that indeed these protected areas can be effective in safeguarding at least some of those species."

Of course, shark sanctuaries only protect the species that actually breed in those areas. It's tougher to protect highly migratory species like the great whites and hammerheads.

And it's also true that the bigger the sanctuaries are, the harder it becomes to enforce the shark-fishing ban.

"You just can't declare a shark sanctuary and then hope that does the job," Worm says, "because we know from experience that illegal fishing can be rampant and can be a significant problem to enforcement."

He tells the story of a ship that was caught right in the middle of the Galapagos Islands national park, loaded with 300 dead sharks.

Worm says, in the long run, in order to take the pressure off sharks, we need to reduce the appetite for their fins. Worm says there's actually an attempt to do that in China, using celebrities to talk people out of ordering shark-fin soup, "making them aware of simple facts, [like] that shark fins for example don't grow back when you cut them off. A lot of people think that's the case but obviously that's not true. The shark dies."

And with more than 70 million sharks dying every year from this trade, Worm says, the world doesn't have a lot of time to preserve these magnificent creatures.