Markets Put The 'Down' In 'Downgrade'

Markets Put The 'Down' In 'Downgrade'

Wall Street investors sent markets into a tailspin Monday, plunging the Dow more than 600 points amid anxiety over a U.S. credit downgrade and worries that key European governments were teetering on the edge of default.

The Dow Jones Industrial Average closed at 10,811, plunging through the 11,000 barrier for the first time since November 2010. The markets continued to fall despite words of encouragement Monday afternoon from President Obama, who said the nation's problems were "imminently solvable."

Obama, seeking to calm the market jitters, said the downgrade was not about the nation's fiscal soundness, but about its political impasse.

Standard & Poor's determines a country's sovereign rating based on scores it gives in five key areas:

EXTERNAL SCORE: Reflects the strength of a country's currency in international transactions and the balance of its imports to exports.

FISCAL SCORE: Factors the sustainability of a country's deficits and debt burden.

MONETARY SCORE: Based on the extent to which a country's central bank can support sustainable economic growth and reduce the impact of major economic or financial shocks.

"No matter what a ratings agency says, we have always been and always will be a triple-A country," he said in a White House address. The United States held a AAA credit rating by Standard & Poor's from 1917 until Friday, when the agency announced a downgrade to AA+.

The president said the downgrade was because the ratings agency "doubted our political system's ability to act."

But Obama's words did not calm the market. It swung over a range of hundreds of points during the afternoon before moving solidly downward in the last half-hour of trading.

The European Central Bank's pledge to buy bonds from Italy and Spain pushed yields on down by more than a half-point on both bonds. Meanwhile, markets in Britain, France and Germany all lost more than 2 percent.

The finance ministers and central bankers of the Group of 20 industrial and developing world also issued a joint statement Monday saying they were committed to taking all necessary measures to support financial stability and growth.

"Europe at the moment is a much bigger problem than the United States," Tyler Cowen, a professor of economics at George Mason University, said. 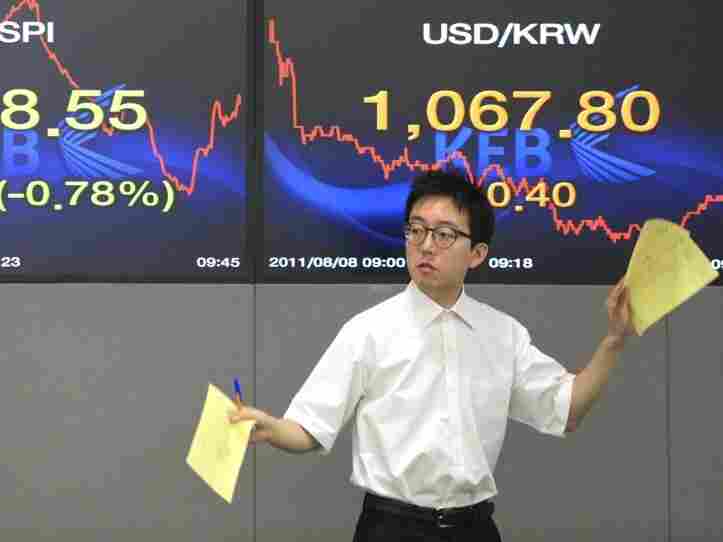 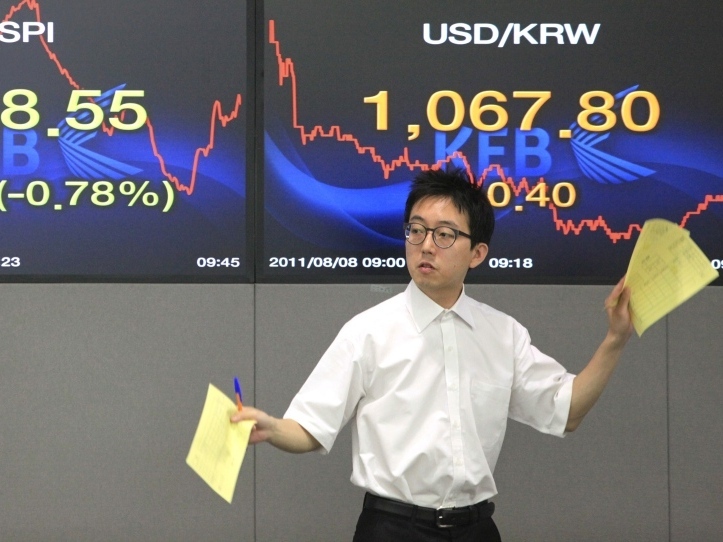 A currency trader gestures Monday in front of screens showing the Korea Composite Stock Price Index, left, and the exchange rate between the U.S. dollar and the South Korean won at the Korea Exchange Bank headquarters in Seoul, South Korea.

"The debt issue [in the U.S.] ... becomes really serious 10 years from now, when health care costs are spiraling," Cowen told NPR. "In the short run, we have a manageable problem. In the longer run, we do not."

Looking For A Way Out

Policymakers around the world are trying to come up with a strategy to shore up market worries over the global economy and the levels of debt in the U.S. and Europe.

Nouriel Roubini, an economist at New York University who predicted the housing market crash and recession before the vast majority of other economists, said that the credit rating agency should have waited "to see whether Democrats and Republicans reach an agreement on deficit reduction."

The downgrade, he told NPR, is going to cause a "stock market correction [and] reduce business, consumer and corporate confidence.

The following are definitions of some common phrases being used in the ongoing economic debate:

Credit Rating Agencies: The three largest and most influential — Moody's, Standard & Poor's and Fitch — issue periodic ratings based on their analysis of a country's credit worthiness based on economic and political factors.

Government Bonds: They're sold to allow governments to borrow money and pay investors at a specific yield, which is set by the market's view of risk. AAA is the least risky rating given by credit rating agencies.

Sovereign Credit Rating: A rating issued by credit ratings agencies to indicate their analysis of risk. The U.S. enjoyed the highest rating — AAA or "highest quality" — from all three major agencies until Friday, when S&P downgraded the U.S. to AA+.

"Its going to increase the risk of a double dip recession if not ensure it," he warned.

Other economists think the downgrade will have little affect on interest rates.

"Global investors have little alternative but to continue to do business in dollars and store wealth in Treasuries. The bonds denominated in other reserve currencies-the yen and euro-are simply unavailable in suitable quantities," said Peter Morici, a professor at Smith School of Business at the University of Maryland.

So far, the downgrade doesn't seem to be having too much of an impact on U.S. government bonds, known as Treasuries, despite worries that it would prompt investors to demand more. Instead, yields on 10-year Treasuries actually fell.

"Early market reactions suggest that the treasury market will remain well supported," Jane Foley, an analyst at Rabobank International, told The Associated Press. "Even though there may be no sharp sell-off in treasuries this week, S&P's decision should at least provide a signal to the U.S. government that it may be foolhardy to continue to take its creditors for granted indefinitely."