Accessibility links
Think You Know Iowa? 5 Things You've Got Wrong To many Americans, Iowa is a symbol of something. But is it really true what they say? As Republican presidential hopefuls converge there for this week's debate and straw poll, here is a look at some of the myths and misconceptions about the state. 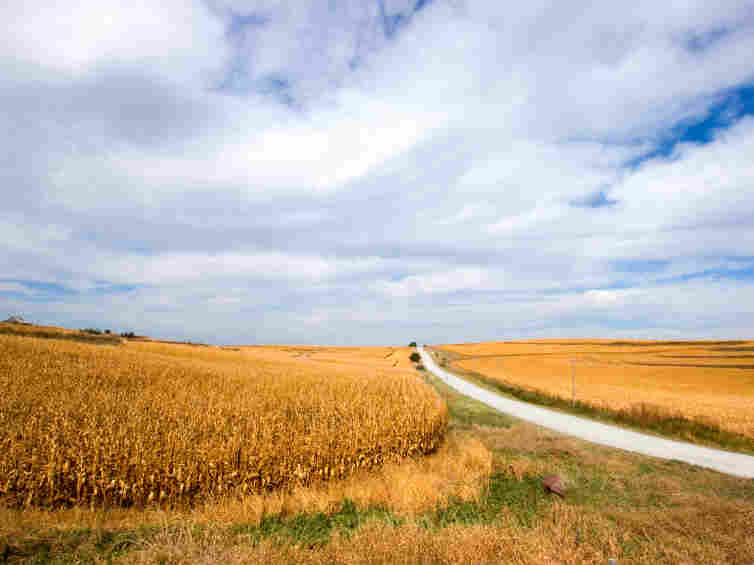 Call it what you will — an August Occasion, Summery Judgment, Iowa ... wa ... whatever — the hype is hyperbolic this week as Republican presidential aspirants converge on Ames, Iowa, like storm clouds on an open prairie. The candidates will debate Thursday night at Iowa State University and then be subjected to a straw poll on Saturday.

Watchers are wondering: Will Iowa be the Republicans' Field of Dreams? Will it be a place where hopefuls can build new Bridges of Madison County? Or is Iowa nothing more now than a mythic — but meaningless — kickoff to the 2012 election?

To many Americans, Iowa is a symbol of something. Sometimes wrongly so.

For instance, ESPN sportswriter Rick Reilly notes in a recent post that Iowa is so flat "you can watch a train pull out for three days." And last year then-Gov. Arnold Schwarzenegger of California said that Iowa is so bland nobody wants to visit there.

Is it true what they say about Iowa? Not always.

So as the nation turns its jaundiced eye toward Iowa, let's take a look at some of the myths and misconceptions about the state:

1. Iowa is flat. Each year, bicyclists ride across Iowa in an annual event called RAGBRAI — the Des Moines Register's Annual Great Bike Ride Across Iowa. "Any participant who has done RAGBRAI can tell you that Iowa isn't flat," says Mark Wyatt, executive director of the Iowa Bicycle Coalition. "First-time participants are wowed by the often hilly terrain of the Loess Hills region or much of the driftless areas of southern Iowa. Sure, there are some flat regions, but Iowa's terrain is surprising — sometimes inducing panic — to the flatlander who thinks a hill is an Interstate overpass."

2. Iowa is boring. Not according to a just-released list of Top Party Schools in America compiled by the Princeton Review. In the past three years the University of Iowa has moved from 12th place on the Review's list to fourth place, just behind the universities of Ohio, Georgia and Mississippi.

3. Iowa is monocultural. "A state that is not open to new ideas would never have given Barack Obama his victory, which propelled him to the presidency," says Des Moines attorney Douglas E. Gross, a former candidate for governor in Iowa and a campaign official for presidential candidates George W. Bush and Mitt Romney. As further evidence, Gross cites the 2009 Varnum decision, in which the Iowa Supreme Court ruled in favor of same-sex marriage, making Iowa the third state to sanction gay marriages. A Drake University survey of more than 1,700 people, released midsummer, shows that an overwhelming majority of Iowans (61 percent) support same-sex marriage. The same survey reveals an intrastate misconception: Most respondents also imagined that fellow Iowans would look unfavorably on same-sex marriage. They were wrong.

4. Iowans love ethanol. "When people say that in order to win in Iowa you need to pander by paying homage to King Corn — not so much," says J. Ann Selzer, a public opinion pollster in West Des Moines. To buttress her point, she refers to the mid-June release of her survey of people who say they will definitely or probably attend the Republican caucus in February 2012. Only 14 percent said that a candidate's opposition to continued subsidies for ethanol would be a "deal-killer."

5. Iowa is politically irrelevant. Iowa is still an essential component of the kingmaking machinery, says Douglas E. Gross. The state's political scrutiny — through debate, straw poll and caucus — separates wheat from chaff and winners from losers. The unsuccessful candidates, Gross points out, "will drop out after the straw poll and caucus results."

Even the RAGBRAI bicyclists think Iowa is still important. The people of Iowa "pay close attention to the presidential race and take the first-in-the-nation role very seriously," says Mark Wyatt, who lives in Iowa City. And they get to know the candidates up close and personally. "There is a little joke about two ladies talking about who they would caucus for. One of the ladies asked how the other liked a particular candidate. "Well, I thought he was much better the third time I met him."

So you see. Rick Reilly is wrong, and so is Arnold Schwarzenegger. Iowa has its ups and downs, and plenty of people want to visit. In fact, a bunch of well-dressed visitors will be on the dais Thursday to talk about the symbolism of Iowa.