Accessibility links
Why The Downgrade Won't End The D.C. Dysfunction You might think the first-ever downgrade of the nation's debt would jolt Washington out of its partisan bickering. You would be wrong.

Why The Downgrade Won't End The D.C. Dysfunction

Why The Downgrade Won't End The D.C. Dysfunction 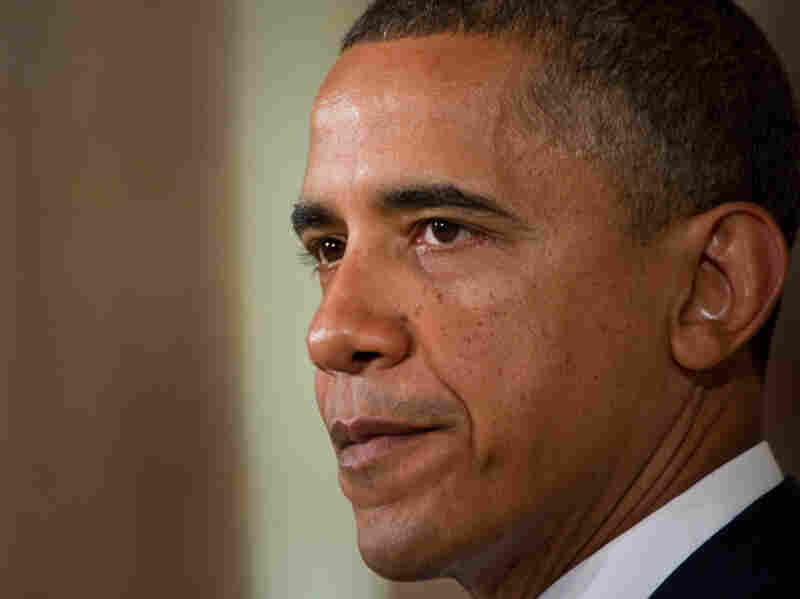 President Obama talks about the downgrade of U.S. debt at the White House on Aug. 8. Nicholas Kamm/AFP/Getty Images hide caption

The political blame game that has followed Standard & Poor's U.S. debt downgrade has been dismally predictable.

Democrats point fingers at the Tea Party wing of the Republican Party. Republicans condemn President Obama for an inability to lead. And S&P has been alternately hailed for calling out Washington's budgeting dysfunction and excoriated for overstepping in its ratings role.

One thing not in dispute?

The first-in-history downgrade of U.S. government debt has added urgency to the task of the yet-to-be-appointed congressional "supercommittee" that's supposed to find ways to cut the nation's deficit by $1.2 trillion over the next decade.

"The downgrade," says Christopher Whalen, an investment banker and analyst, "is a direct challenge to the U.S. government."

It's sending a clear message, he says: "Congress and Obama failed the test of leadership."

But even with the downgrade rattling markets here and abroad, there is deep skepticism among Congress- and market-watchers that the bipartisan committee of six Democrats and six Republicans will find common ground.

House Budget Committee Chairman Rep. Paul Ryan (R-WI), in an appearance Sunday on Fox News, said he would not characterize the bipartisan committee as "super" and that it won't "fix all of our fiscal problems."

If the committee can't agree on a solution to the nation's debt woes, analysts say, its failure will trigger more economic and market uncertainty.

Neither side has the high ground, because both sides caused the swamp.

"The committee must reach compromise and agreement," says David Kotok, chief economist at Cumberland Advisors. "If not, another negative chapter will unfold." That could mean a downgrade from Moody's Investors Service, another ratings agency.

"If Moody's downgrades, all hell breaks loose," Kotok says. "If Congress doesn't understand this, they should be impeached."

During televised comments Monday, Obama acknowledged that the downgrade increased the imperative of the supercommittee to act and announced that he would offer his own suggestions for how it should proceed.

Tackling the deficit, he said, will require a combination of tax increases for "those who can afford it," and "modest adjustments" to health care programs like Medicare.

All eyes in the coming days will be on congressional leaders in the House and Senate who will appoint members to the supercommittee.

The panel was established as part of last week's deal to raise the nation's debt limit, the product of a process so divided and dysfunctional that it is seen by most, including the president, as the driving force behind the debt downgrade.

It wasn't so much that S&P doubted the nation's "ability to pay our debt," Obama said. "They doubted our political system's ability to act."

The critical question now is whether the new panel will include members who would be willing to compromise on taxes, or funding for entitlement programs including Medicare — two areas where lawmakers have seemed unable to find common ground.

More On The Debt Crisis

The Next D.C. Guessing Game: Who's On Debt Panel?

Tyler Cowen, a George Mason University economics professor, says that to succeed, "each party has to be willing to do things that mean its members won't be re-elected."

"I hold out some slim hope that real-world events will lead to agreement, but it's not looking good," Cowen says. "Republicans are doubling down on their opposition to revenue increases, and Democrats are using Medicare to club the Republicans."

And there's a presidential election next year.

"Neither side has the high ground, because both sides caused the swamp," says Kotok of Cumberland Advisors.

Democrats failed to raise the debt ceiling when they controlled both chambers of Congress before last fall's election. Obama's proposed budget failed to attract a single vote in the Senate earlier this year.

The Republican refusal to consider revenue increases and the intransigence of Tea Party House members helped push the nation to the brink of default in recent weeks.

Republicans also passed the Bush-era tax cuts, considered one of the largest drivers of the deficit. But President Obama agreed to extend those cuts last year.

That doesn't mean both sides are accepting equal blame, or appear willing to give in on the entrenched positions that led to the debt ceiling and default brinksmanship.

Martin Baily, chairman of the Council of Economic Advisers during the Clinton administration and now a senior economic studies fellow at the Brookings Institution, says "more blame" should fall on Republicans.

"The refusal to countenance any tax revenue increases makes the fiscal problems we have impossible to solve," says Baily, a Democrat. He also faults Obama for ceding bargaining power and engaging in debt-ceiling negotiations that "were a charade."

At the conservative Heritage Foundation, fiscal policy expert JD Foster says he hopes the committee would "seriously undertake budget reforms and spending reductions" but is underwhelmed by their goals.

In the wake of the downgrade, "the pressure on the [committee] to succeed is substantially greater," Foster says, "yet its mandate is far too low, and the timeline of finishing in late November is far too slow."

What The Downgrade Tells Us

Skeptics of the supercommittee's ability to succeed in forging a plan — and then persuading Congress to approve it — say they have plenty of evidence to back up their jaundiced view.

"America is a young, impulsive, reckless nation that does not want to behave — thus the downgrade," says Whalen, the analyst whose most recent book is Inflated: How Money and Debt Built the American Dream.

"The fact that politicians chose to flirt with default is what drove S&P action," he said, characterizing the rating agency's move as "appropriate."

Scott Frew, of Rockingham Capital, a Connecticut-based hedge fund, has another way of looking at it, and one more in tune with those, including Obama, who see more politics than finance in the downgrade.

Since "nobody seriously questions our ability to pay our debt," Frew says, the S&P seems to put the U.S in a "can pay, but won't" deadbeat category.

It won't take too long to find out whether Congress' bipartisan supercommittee and Congress as a whole will end up in a similar category — "can fix, but won't."

The stakes over the past few days just got a whole lot higher.