Accessibility links
How Much Do Debt Ratings Matter? Speculation abounds about the impact of S&P's unprecedented downgrade of U.S. government debt. The news weighed on stock markets and raised questions about the impact on the economy. But experts say ratings matter less than they once did. 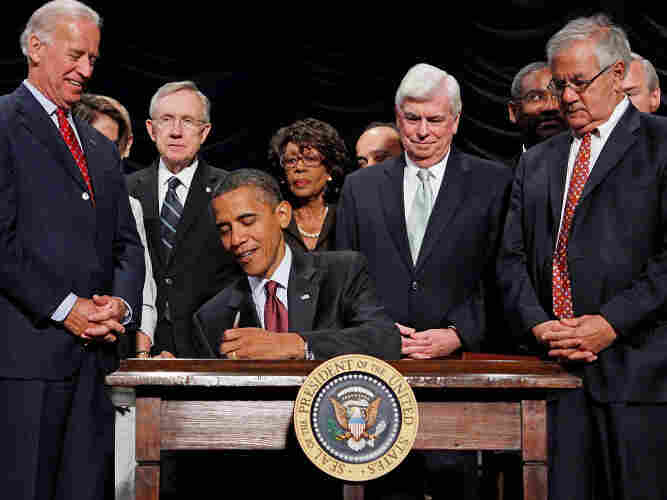 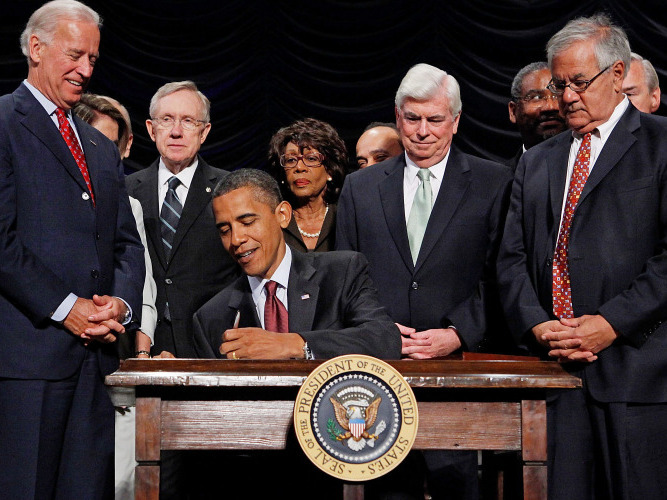 President Obama signs the financial reform bill into law in 2010 as Vice President Biden and lawmakers look on.

There's a lot of speculation about how much these risk downgrades are weighing on stock markets and whether they will continue to ripple through the economy. But there are systemic reasons that ratings matter less than they have in recent years.

In fact, bond markets did the opposite on Monday. In spite of S&P's higher risk assessment of U.S. debt, demand for Treasuries kept flooding in.

The easy explanation for this is that Europe is consumed with its own debt crisis, which makes the U.S. the safer bet. But the significance of ratings has also changed.

"Ratings are becoming less important across the board," says Kent Smetters, a professor at the Wharton School.

He says ratings were more powerful just a few years ago. They amplified the boom, then the bust of mortgage securities.

"The ratings really played a key role in getting a lot of capital into the mortgage market," Smetters says. "That has obviously retrenched quite a bit. Insurance companies today do not put a lot of capital to work based on ratings agencies alone."

The Dodd-Frank financial reform bill passed a year ago is also responsible for taking the importance of ratings down a peg. The law requires banks and insurance companies, for example, to hold more capital based on the risks of their assets. The riskier their assets, the more money they have to keep on hand.

In the past, regulators measured that risk using ratings like those by S&P and Moody's. But the new law, once fully implemented, will change that.

Risks of all sorts of securities will be measured in other ways — for example, internal assessments — but they won't be pegged to a ratings agency's verdict.

The Federal Reserve is underscoring the move away from ratings agencies. Soon after S&P announced its downgrade on Friday, the Fed said it would not require banks and other institutions to hold more capital because of the change.

Ratings used to also guide a lot of institutional investors, but that doesn't happen much anymore.

"I could see few, if any instances in which pension funds would need to rush to sell any assets as a result of the downgrade of the United States Treasury debt," says Keith Brainard, research director for the National Association of State Retirement Administrators.

Brainard says that over the past two decades, pensions have changed the language of their investment guidelines to rely less on ratings.

Analysts point to other reasons people have lost faith in ratings in recent years. They cite a 2002 downgrade that had no impact on Japan. They say ratings agencies acted long after bond markets had digested state budget problems in California or Illinois.

"The markets do not believe that S&P is right," says Karen Petrou, managing director of Federal Financial Analytics.

She says if anything, people are jumping from stock markets into Treasuries because of their relative safety.

"The alternative to Treasuries is the mattress," she says.

Petrou says she believes investors over the weekend got spooked that stock markets would fall, and that's what triggered a stock sell-off, not the downgrade itself.

"The markets are so volatile right now that forecasting any long-term impact on mortgage rates or car interest rates, I think it's premature," she says.

If the economy is a plane, she says, the ratings system measures altitude. And it's broken, but so is the landing gear, and the engine isn't working, either.