Accessibility links
Young Ultra-Orthodox Jews Struggle Against Tradition Samuel Katz says he's leading a double life. He'd study in temple, but he didn't tell his family that he was eating taboo food and wanted to go to college outside his ultra-Orthodox Jewish community. 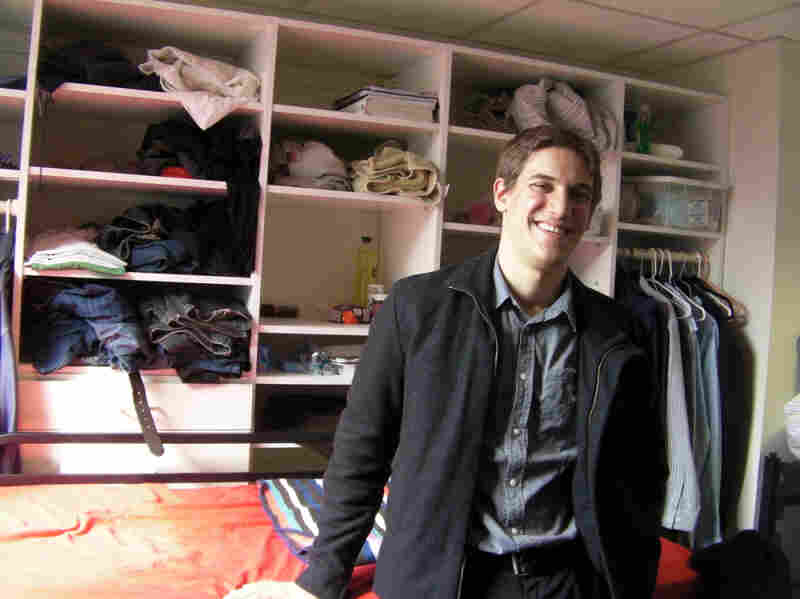 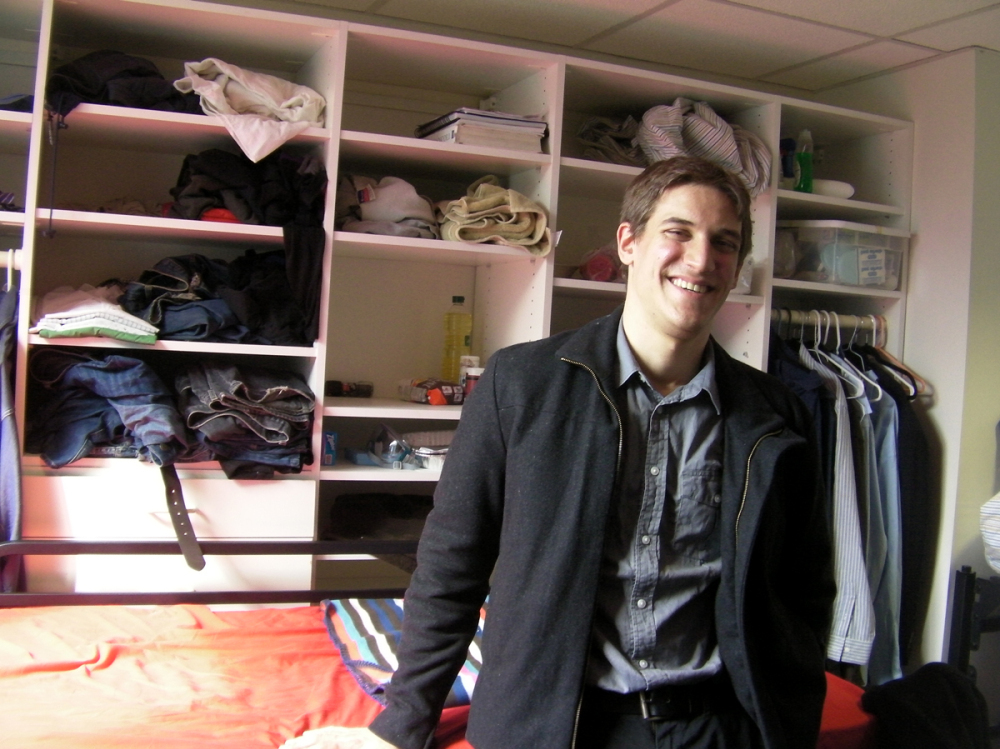 Samuel Katz left the ultra-Orthodox community of Williamsburg, Brooklyn, where he grew up. He's now a student at Stony Brook University on Long Island.

A handful of young ultra-Orthodox Jews are struggling to leave their neighborhoods in Brooklyn to take up less religious or even nonreligious lifestyles in other parts of the city. They often hide their desire for a different life. When they do or say something, their families and communities might turn on them. Sometimes they're told they'll never make it if they leave.

One young man fought to leave behind the only world he knew.

Samuel Katz is 21, and he's accumulated his library of sacred texts, science books and classic literature gradually. Only religious books were allowed in the insular Hasidic community in Williamsburg, Brooklyn, where he grew up. New York City pulsed all around him, but he lived a world apart. Men and women were separate. Everyone ate strictly kosher. They spoke Yiddish almost exclusively.

Katz and the other boys studied at a yeshiva, or Jewish school. There were no public schools, no concerts, and minimal interaction with anyone outside the community. But when he was 10, his parents divorced, and things changed for him.

"We were a school of 1,300 boys," Katz says. "I was the only child from a divorced family. And I didn't want anyone to know because there was such a stigma on it. I was looking for some escape. So there was this library next to my house. Actually, my first secular book I read — I read Charlie and the Chocolate Factory by Roald Dahl. And I read it with a dictionary and I compared every word. Took me like a month or something."

The more Katz read, the more he wanted to read. Books on psychology, human behavior and philosophy.

"Nobody knew about it. Just my secret life," he says.

Then, Katz went to a Darwin exhibit at the Museum of Natural History. He found himself staring at an evolutionary timeline of actual hominid skulls, and he imagined his head at the end of that line. 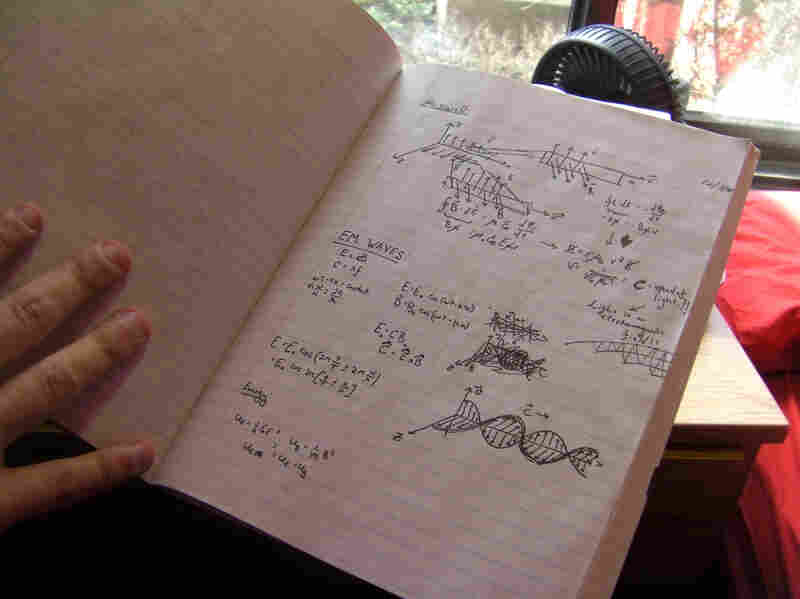 Katz took an advanced physics class at Stony Brook University. He cherishes this page of his notebook, when his professor began teaching about electromagnetism. Ari Daniel Shapiro hide caption 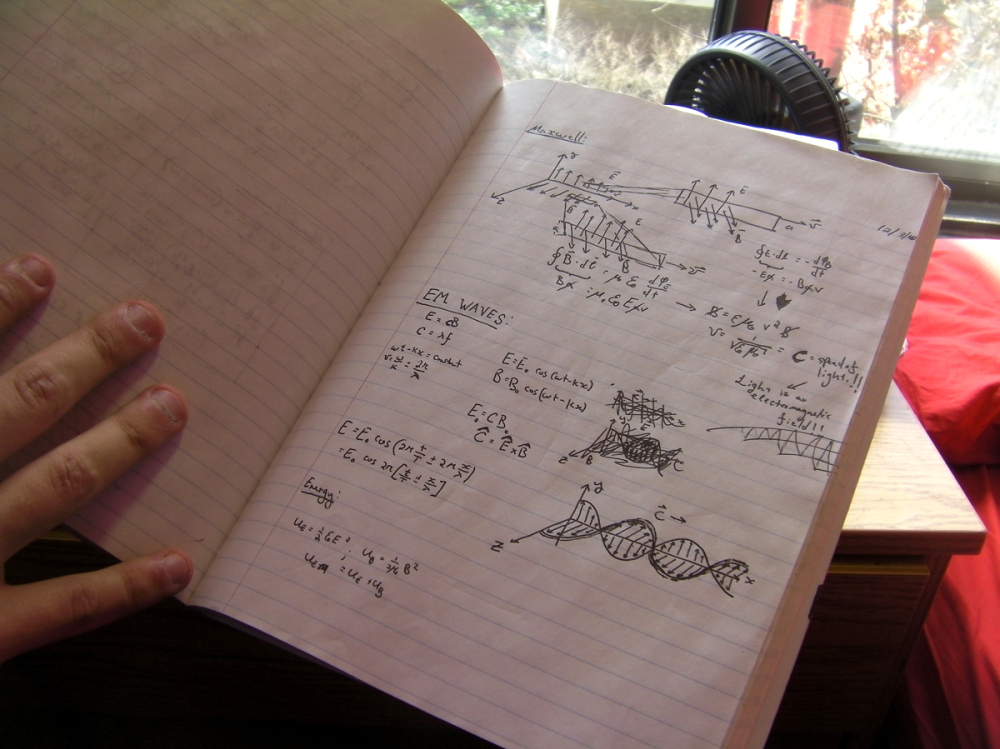 Katz took an advanced physics class at Stony Brook University. He cherishes this page of his notebook, when his professor began teaching about electromagnetism.

When he was 16, Katz went to a prestigious religious school in Israel, and he struggled. He confessed his secular interests to the dean of his school — a scholar whom he greatly respected.

"And they put me in a single room so I don't corrupt anyone — so I don't talk to any other students. Friends came telling me — staff is asking about me, whether I'm saying things, which was miserable. I mean, it was absolutely terrible. Finally I just said, 'I'm going home,' " Katz recalls.

When he got back to New York, Katz felt like he was leading a double life. He'd pray and study at temple, but he didn't tell his family that he was eating pork in private and that all he really wanted was to go to college. But he needed help getting his GED, which is where an organization called Footsteps came in.

Open the door to its office in Manhattan, and there are a lounge with a TV, a study and a large meeting room. Footsteps is a confidential place for people questioning the ultra-Orthodox world and looking to venture beyond it.

Katz went to Footsteps seeking help with math and writing. And he found a community, and some of his best friends.

"It's a profound experience to be around," he says.

Jenkins helped him explore his new identity and find his way to college. Footsteps has served more than 600 people, either face to face or over the phone. And some of the participants take advantage of the career coaching here.

"If you have no skills and you've had no experience, how do you explain that? I say, 'This is a strength. You have chosen a particular life path that has extreme challenges, and you have been successful. That's amazing. Spin it,' " Jenkins says.

Samuel Katz's family declined to be interviewed. In fact, many are reluctant to talk about this issue. Pearl Engelman, a friend of the family, is an exception. Her youngest son left the ultra-Orthodox community seven years ago.

Engelman has a good relationship with her son now, but she understands what Katz's family must be going through.

"It's heartbreaking to watch your child choose to throw away the best that you've given him, and choose what we consider the worst," she says. "So which normal parent is going to say, 'Fine, your happiness is the only thing that matters?' They would try to explain to the child that their version of happiness is a recipe for total disaster because they're throwing away this world and they're throwing away the next world."

The stakes for leaving are high, but Katz did manage to get out and go to college. He starts his junior year at Stony Brook University on Long Island this fall. He calls his mom every Friday night before the Sabbath. They talk, but he doesn't speak openly about his new life. Katz knows it upsets her.

"It hurts me," he says. "I wish there was a way out, but there isn't. A friend of mine who once told me, 'Sam, do you realize how brave you are?' I was like, 'You know, I don't think it was bravery that made me do it. You leave because you're so afraid of the life that you'd have if you stay.' "

For Katz, the life he lives now is full of biology, physics and theater. But every day before he leaves his dorm room, he double checks that he's got his yarmulke folded in his pocket. Just in case his family shows up to surprise him on campus.