Accessibility links
Evangelicals Question The Existence Of Adam And Eve Some conservative scholars are saying publicly that they can no longer believe the Genesis account. Genomic evidence is too strong, they say, to believe in a historical Adam and Eve. But for some, this questions the fundamental nature of Christianity, creating a profound rift in the community. 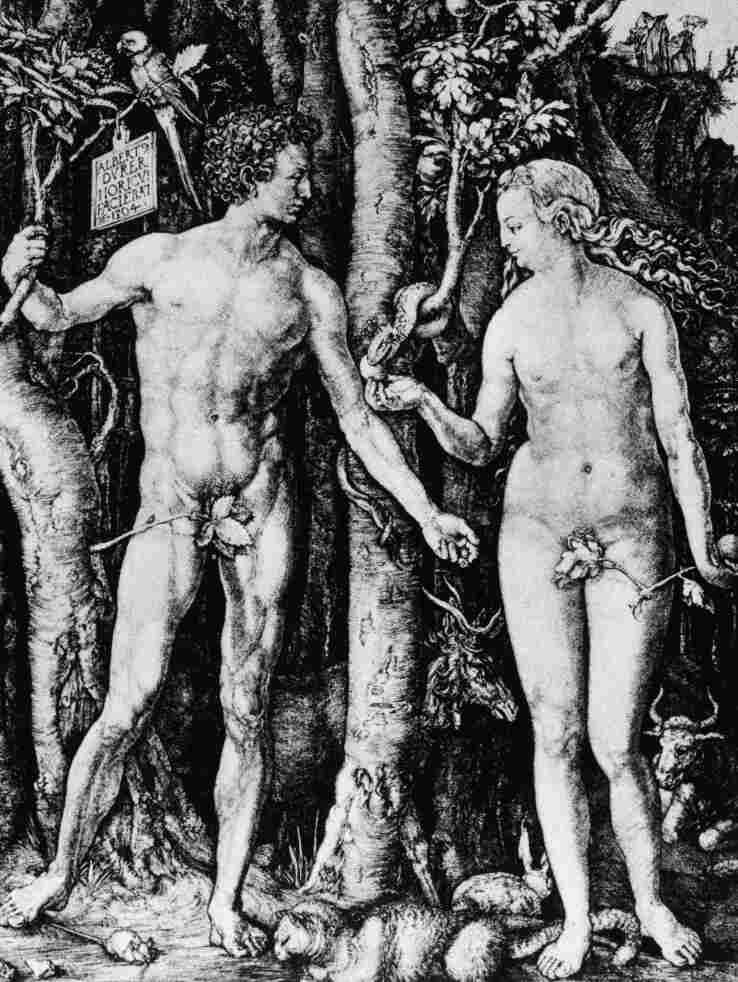 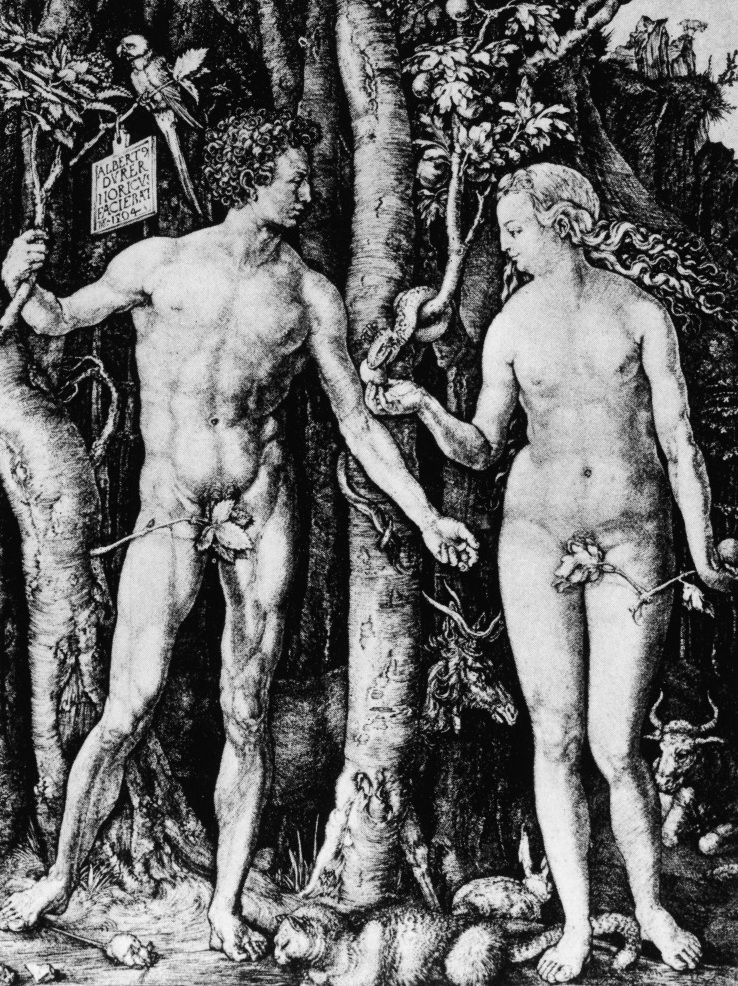 An engraving depicting Adam and Eve in the Garden of Eden, by Albrecht Durer, 15th century.

Let's go back to the beginning — all the way to Adam and Eve, and to the question: Did they exist, and did all of humanity descend from that single pair?

According to the Bible (Genesis 2:7), this is how humanity began: "The Lord God formed man of the dust of the ground, and breathed into his nostrils the breath of life; and man became a living soul." God then called the man Adam, and later created Eve from Adam's rib.

Polls by Gallup and the Pew Research Center find that four out of 10 Americans believe this account. It's a central tenet for much of conservative Christianity, from evangelicals to confessional churches such as the Christian Reformed Church.

But now some conservative scholars are saying publicly that they can no longer believe the Genesis account. Asked how likely it is that we all descended from Adam and Eve, Dennis Venema, a biologist at Trinity Western University, replies: "That would be against all the genomic evidence that we've assembled over the last 20 years, so not likely at all."

Venema says there is no way we can be traced back to a single couple. He says with the mapping of the human genome, it's clear that modern humans emerged from other primates as a large population — long before the Genesis time frame of a few thousand years ago. And given the genetic variation of people today, he says scientists can't get that population size below 10,000 people at any time in our evolutionary history.

To get down to just two ancestors, Venema says, "You would have to postulate that there's been this absolutely astronomical mutation rate that has produced all these new variants in an incredibly short period of time. Those types of mutation rates are just not possible. It would mutate us out of existence."

Venema is a senior fellow at BioLogos Foundation, a Christian group that tries to reconcile faith and science. The group was founded by Francis Collins, an evangelical and the current head of the National Institutes of Health, who, because of his position, declined an interview.

And Venema is part of a growing cadre of Christian scholars who say they want their faith to come into the 21st century. Another one is John Schneider, who taught theology at Calvin College in Michigan until recently. He says it's time to face facts: There was no historical Adam and Eve, no serpent, no apple, no fall that toppled man from a state of innocence.

"Evolution makes it pretty clear that in nature, and in the moral experience of human beings, there never was any such paradise to be lost," Schneider says. "So Christians, I think, have a challenge, have a job on their hands to reformulate some of their tradition about human beginnings."

'Fundamental Doctrines Of The Christian Faith'

To many evangelicals, this is heresy.

"From my viewpoint, a historical Adam and Eve is absolutely central to the truth claims of the Christian faith," says Fazale Rana, vice president of Reasons To Believe, an evangelical think tank that questions evolution. Rana, who has a Ph.D. in biochemistry from Ohio University, readily admits that small details of Scripture could be wrong.

"But if the parts of Scripture that you are claiming to be false, in effect, are responsible for creating the fundamental doctrines of the Christian faith, then you've got a problem," Rana says.

Rana and others believe in a literal, historical Adam and Eve for many reasons. One is that the Genesis account makes man unique, created in the image of God — not a descendant of lower primates. Second, it tells a story of how evil came into the world, and it's not a story in which God introduced evil through the process of evolution, but one in which Adam and Eve decided to disobey God and eat the forbidden fruit.

"When Adam sinned, he sinned for us," Mohler says. "And it's that very sinfulness that sets up our understanding of our need for a savior.

Mohler says the Adam and Eve story is not just about a fall from paradise: It goes to the heart of Christianity. He notes that the Apostle Paul (in Romans 5 and 1 Corinthians 15) argued that the whole point of Jesus' crucifixion and resurrection was to undo Adam's original sin.

This debate over a historical Adam and Eve is not just another heady squabble. It's ripping apart the evangelical intelligentsia.

"Evangelicalism has a tendency to devour its young," says Daniel Harlow, a religion professor at Calvin College, a Christian Reformed school that subscribes to the fall of Adam and Eve as a central part of its faith.

"You get evangelicals who push the envelope, maybe; they get the courage to work in sensitive, difficult areas," Harlow says. "And they get slapped down. They get fired or dismissed or pressured out."

Harlow should know: Calvin College investigated him after he wrote an article questioning the historical Adam. His colleague and fellow theologian, John Schneider, wrote a similar article and was pressured to resign after 25 years at the college. Schneider is now beginning a research fellowship at Notre Dame.

Several other well known theologians at Christian universities have been forced out; some see a parallel to a previous time when science conflicted with religious doctrine.

"The evolution controversy today is, I think, a Galileo moment," says Karl Giberson, who authored several books trying to reconcile Christianity and evolution, including The Language of Science and Faith, with Francis Collins.

Giberson — who taught physics at Eastern Nazarene College until his views became too uncomfortable in Christian academia — says Protestants who question Adam and Eve are akin to Galileo in the 1600s, who defied Catholic Church doctrine by stating that the earth revolved around the sun and not vice versa. Galileo was condemned by the church, and it took more than three centuries for the Vatican to express regret at its error.

"When you ignore science, you end up with egg on your face," Giberson says. "The Catholic Church has had an awful lot of egg on its face for centuries because of Galileo. And Protestants would do very well to look at that and to learn from it."

Fuzale Rana isn't so sure this is a Galileo moment: That would imply the scientists are correct. But he does believe the stakes are even higher in today's battle over evolution. It is not just about the movement of the earth, but about the nature of God and man, of sin and redemption.

"I think this is going to be a pivotal point in Church history," he says. "Because what rests at the very heart of this debate is whether or not key ideas within Christianity are ultimately true or not."

But others say Christians can no longer afford to ignore the evidence from the human genome and fossils just to maintain a literal view of Genesis.

"This stuff is unavoidable," says Dan Harlow at Calvin College. "Evangelicals have to either face up to it or they have to stick their head in the sand. And if they do that, they will lose whatever intellectual currency or respectability they have."

Mohler and others say if other Protestants want to accommodate science, fine. But they shouldn't be surprised if their faith unravels.