Accessibility links
Los Angeles: City Of Perpetual Cinematic Destruction From Earthquake to The Day After Tomorrow, why have filmmakers always loved demolishing L.A.? We offer a list of movies in which the city is attacked by aliens or killer robots, plagued by zombies and (most frequently) crushed by natural disasters. 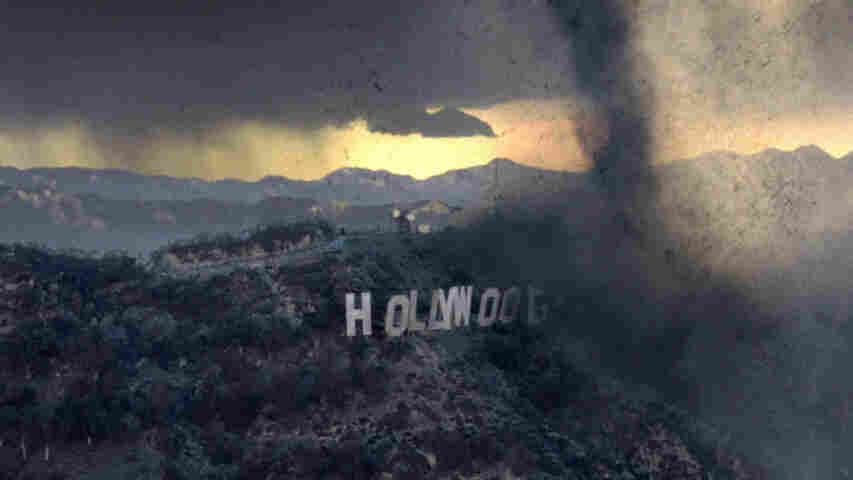 A tornado destroys the Hollywood sign (and everything it stands for) in the 2004 film The Day After Tomorrow. Photofest hide caption

Los Angeles doesn't stand a chance on the big screen. In the movies, the City of Angels has been obliterated by titanic tornadoes, epic earthquakes and a colossal volcano that bubbles up from below the La Brea Tar Pits. 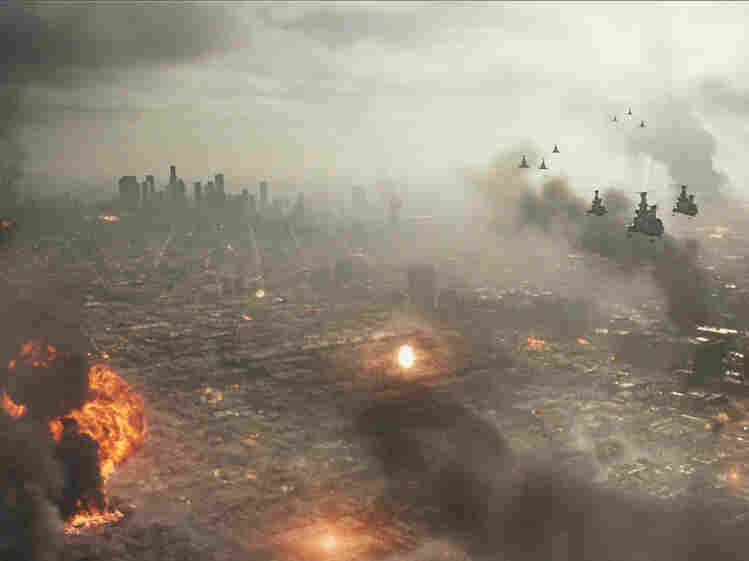 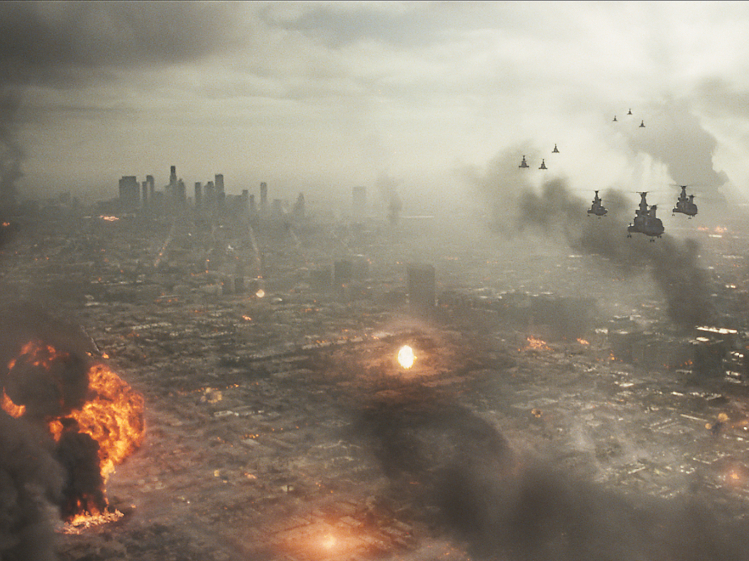 The Day After Tomorrow

And if it's not getting hammered by natural disasters, it's being ravaged by wayward, giant flying creatures, like in the 2007 movie Dragon Wars: D-War, or it's getting blasted by cyborg assassins — as in the Terminator franchise, being devastated by the zombie apocalypse (2009's Zombieland) or getting zapped by merciless Martians "menacing all mankind and every creature on Earth" in War of the Worlds (the original 1953 version, Steven Spielberg's 2005 version, and the 2008 direct-to-video sequel).

Did we miss anything?

Perhaps L.A. is the focus of so much cinematic destruction because it's the city filmmakers know best. Maybe Hollywood is just tapping into a sense of disdain the rest of the world feels for the city's rich and famous. Whatever the reason, Los Angeles has been crushed enough times by the very people who call it home that chronicling the carnage for our series "On Location," in which we look at the places where America's films are shot, seemed like a no-brainer.

By far, L.A.'s biggest cinematic target is the famous nine-letter landmark perched in the Hollywood hills. The Hollywood sign gets demolished by extreme weather in The Day After Tomorrow (2004) and is shot down by John Belushi, himself a force of nature, in the movie 1941.

"My name's Wild Bill Kelso, and don't you forget it!" says Belushi's character, as he flies a World War II bomber into L.A.

Miraculously, the Hollywood sign is back for more mayhem in just about every disaster movie set in Los Angeles.

Same goes for the Capitol Records Building, which was designed to resemble a stack of 45 rpm records. The architectural wonder is under Cylon attack in 1981's Conquest of the Earth, a film from the original Battlestar Galactica franchise. The same building crumbled, along with the rest of the city, while Charlton Heston ditched Ava Gardner to rescue Genevieve Bujold in the 1974 movie Earthquake. Chalk the repetition up to more than the building's iconic status: Sharp-eyed viewers might notice that Universal Pictures, which produced both movies, may have used the same footage twice.

Some filmmakers can't leave the city alone either. Roland Emmerich, who set those twisters on L.A. in The Day After Tomorrow, also blew it up (via alien spaceships) in the 1996 film Independence Day and destroyed it with a massive earthquake in 2012, which he made in 2009.

In the movies, Los Angeles is often a post-apocalyptic outpost, filled with undesirables on the run, like in the classic Blade Runner (1982), but also in Resident Evil: Afterlife (2010) and the 1996 Kurt Russell vehicle, Escape from L.A.

While doing my in-depth investigative reporting for this story, I asked L.A.'s mayor, police chief and several City Council members whether they were at all concerned that a Hollywood-scale calamity could annihilate the city. "Nah," they all said, "that's only in the movies."

But just to be sure, I visited L.A. County's Office of Emergency Management.

"Preparedness is a key to survival, advised Ken Kondo, a spokesman for the emergency center whose high-tech situation room was featured in the 1997 movie Volcano, in which the titular destructive force, buried beneath the La Brea Tar Pits, erupts, sending Tommy Lee Jones and Anne Heche scurrying for the coast.

What are the plans in case L.A. gets hit with an earthquake?

"People are instructed to drop, cover and hold on," said Kondo.

How prepared is L.A. for tornadoes?

"About a year ago, we had a funnel cloud touch down in Compton," he remarked.

How about zombies and aliens?

"Zombies and aliens is interesting," Kondo said, without a hint of irony. "The same principles apply: talking about having an emergency kit, food, water, flashlight, batteries, medication; having a jacket, long sleeves."

And he added, "It could happen at any time."

Seriously? Is L.A. really prepping for flesh-eating zombies or demented space aliens? At the emergency center, I tried to clarify with Sheriff Sergeant Brian Muller.

"In the movies," I clarified.

"Oh, the movie aliens," Muller nodded. "I wasn't sure if you were talking about immigration aliens coming to L.A. We have a lot of those, too."

For good measure, Muller admitted it "sure would be fun" if space aliens were to land in Los Angeles. "But let's hope they're friendly, and if they're not, they don't have more lethal weapons than we have."

Space aliens are always visiting L.A. in the movies, if only to teach us that we really should take better care of our Earth, that we mustn't anger genetically engineered replicants or cyborgs, and that we'd better be nice to intergalactic tourists, even if they don't always like us. But as Skyline, Transformers and Independence Day illustrated, sometimes there's no way to prepare for unreasonable enemies.

So visit the beach in Santa Monica while you still can. On Aug. 11, it's supposed to be overrun by hostile space creatures. That's according to the recent movie Battle: Los Angeles. Which should not be confused with the made-for-TV movie Battle of Los Angeles, in which a giant spacecraft heads straight for downtown before commencing destruction. Go ride the ferris wheel and the sea creature thrill ride on the pier before all of us mere earthlings have to run for our lives!