Accessibility links
In San Francisco, Look Out For Gulls Gone Wild They prey on species targeted for conservation, as well as left-over hot dogs at Giants games. As biologists restore shorelines for threatened wildlife, there's more room for gulls, too. And it's tough to scare them away: "They'll dive bomb you and hit you in your head," notes one expert. 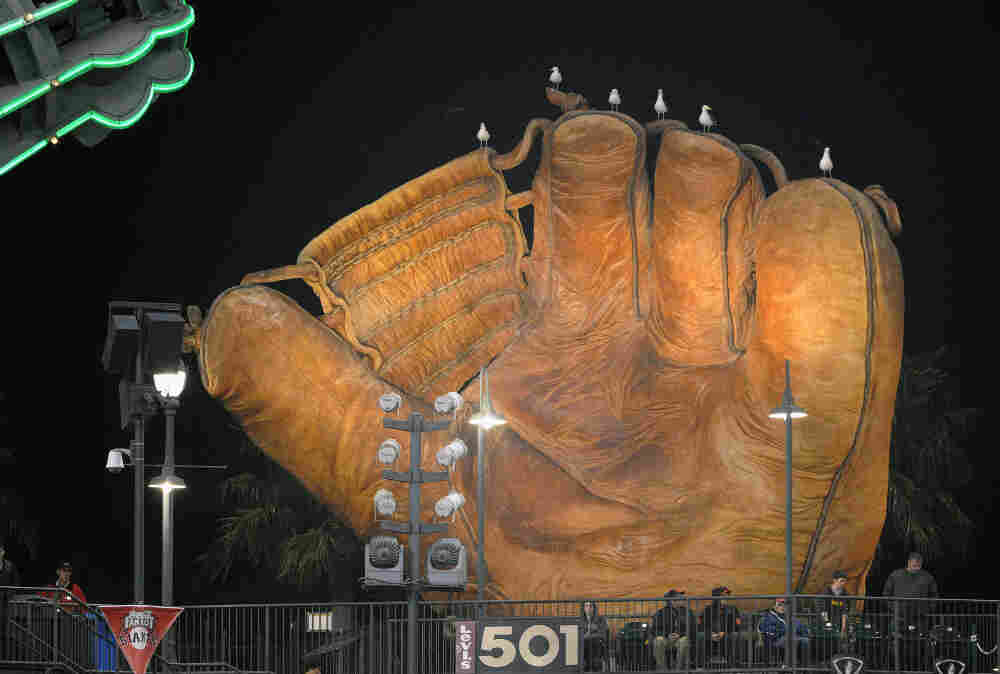 In San Francisco, gulls sit atop the large baseball glove behind the bleachers in left-center field during a game between the San Diego Padres and the San Francisco Giants. The gulls are known for arriving right at the end of games to pick up food scraps. Thearon W. Henderson/Getty Images hide caption 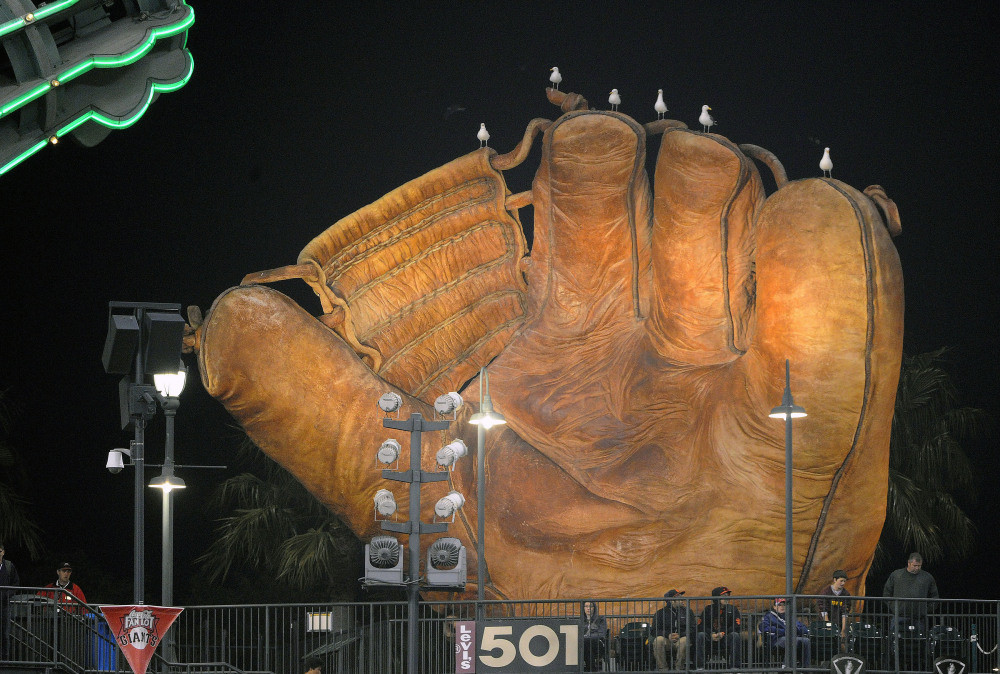 In San Francisco, gulls sit atop the large baseball glove behind the bleachers in left-center field during a game between the San Diego Padres and the San Francisco Giants. The gulls are known for arriving right at the end of games to pick up food scraps.

The aggressive California gull is putting a San Francisco Bay restoration project at risk. For more than a century, the bay has been home to industrial salt-harvesting ponds. Now, thousands of acres of those ponds are being restored for shorebirds and wildlife.

But that's creating an opportunity for the problematic gull.

Gulls In The Outfield

You can see them at work on a visit to AT&T Park. In the bottom of the 9th inning, the San Diego Padres are up, 5-3, over the hometown Giants.

As the crowd cheers the late-inning comeback, hundreds of gulls appear from across the water. Like clockwork, they show up just before the game ends.

"Don't ask me how — they just know," says Mike Krukow, a broadcaster with the Giants. "They come in, and it's always with two outs to go in the 9th inning, and there they are."

Why do the gulls always show up right toward the end of ballgames in San Francisco? Lauren Sommer asked local experts for their theories:
−The birds recognize "Take Me Out To The Ballgame."
−They keep tabs on the number of people still in the stands, and move in when it's less crowded.
−They're (understandably) attracted to the smell of garlic fries.

The attraction, of course, is the half-eaten hot dogs and popcorn left in the stands. Gull numbers have grown so high that the ballpark is considering bringing in a falcon to scare them away; but that's not possible everywhere.

At the southern end of San Francisco Bay, a crew from the U.S. Geological Survey is working on a small island in the middle of a former salt pond. It's home to a colony of Forster's terns.

Garth Herring and a team of scientists fit the small tern chicks with radio transmitters.

"When that transmitter is attached to a live chick, the transmitter beeps at a very specific rate," Herring says.

If the chick dies, the beep slows down. But why do they need to know if a chick is dead?

"Just to the north of us, about roughly about a mile, there's one of the largest California gull colonies," Herring explains. "They'll come in, they'll grab the chick."

The gulls then feed the chick to their young. After it's digested, Herring and his team go looking for the still beeping transmitter.

"It's pretty common that we find just a small pile of bones and the radio transmitter," he says. 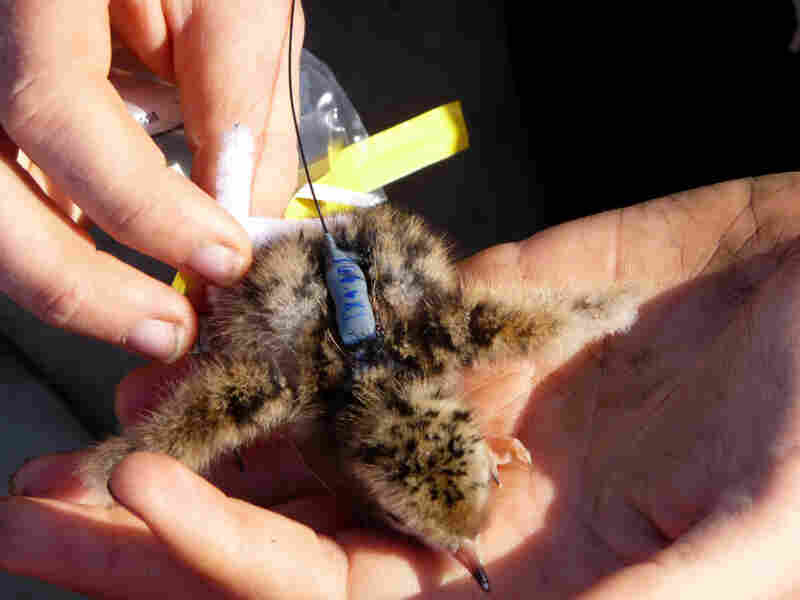 A Forster's tern chick is tagged by a crew member from the U.S. Gelogical Survey. Gulls eat 40 percent of the tagged chicks. Lauren Sommer for NPR hide caption 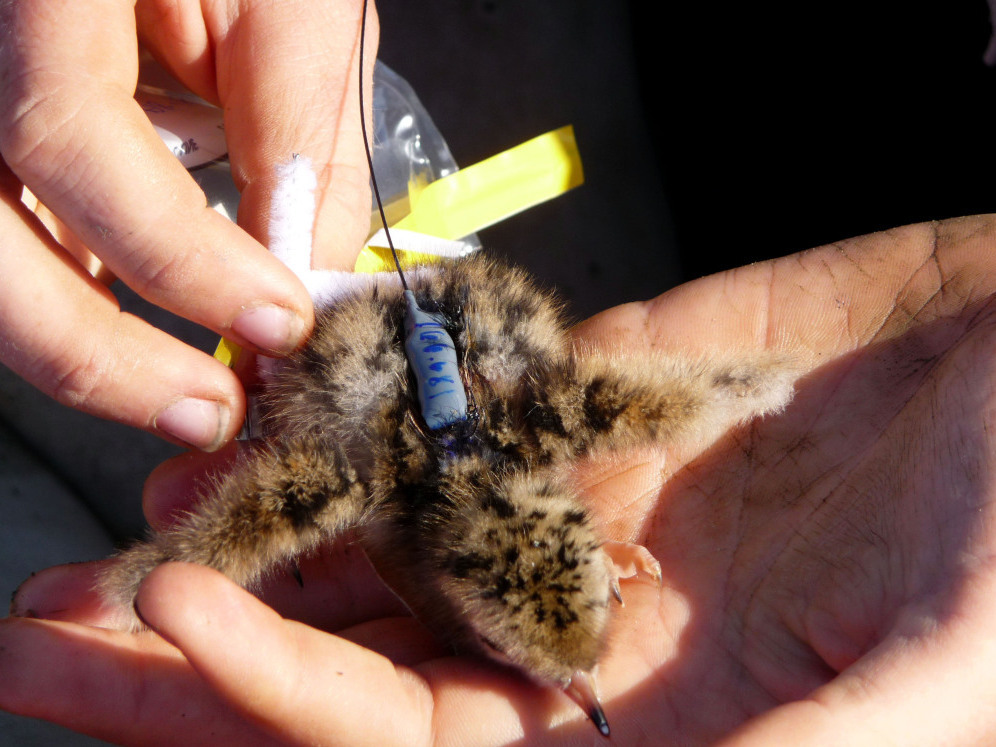 A Forster's tern chick is tagged by a crew member from the U.S. Gelogical Survey. Gulls eat 40 percent of the tagged chicks.

"They're the big bully," says Cheryl Strong, a biologist with the U.S. Fish and Wildlife Service. She says California gulls first showed up in the Bay Area in the 1980s, and the population has exploded since then.

California gulls are one of the earliest nesting species, Strong says, and also probably the most aggressive.

The restoration project has spent millions of dollars on pond habitat for shorebirds like Forster's terns and the threatened Western snowy plover. But it's a conservation Catch-22: As habitat is restored for shorebirds, it also creates more habitat for gulls.

She says the Fish and Wildlife Service is studying ways to manage the gull problem. One option is killing the birds. But gulls can live up to 25 years and with an endless food source at nearby landfills and baseball parks, she says there's only so much they can do.

"If you're talking about removing birds lethally, it's just not feasible," she says.

'They Have Pretty Good Aim'

Caitlin Robinson-Nilsen is with the San Francisco Bay Bird Observatory. Her job is to haze the gulls. She walks across a levee, blowing a whistle and waving her arms.

"So up ahead there are some gulls doing some courtship behaviors on the levee which is definitely a bad sign," Robinson-Nilsen says. "This is one of the areas where we definitely do not want them to nest."

The idea is to keep the gulls away from sensitive shorebirds — and they aren't happy about it.

"They'll dive bomb you and hit you in your head," she says. "They're very good at pooping on you. They have pretty good aim that way.

Robinson-Nilsen says they're hazing gulls twice a day during nesting season at selected sites near restoration areas. So far, it's working: there are fewer nests there. But with millions of tax dollars being spent on restoring habitat, biologists expect they'll be doing a lot more gull management in the years ahead.