Accessibility links
Movie Review - 'The Help' - Life In The South, Through The Eyes Of 'The Help' Kathryn Stockett's best-selling novel about race relations in Mississippi is adapted to the screen, where her subtle prose is turned into hackneyed moralizing. Despite the talents of Emma Stone and Viola Davis, The Help strands its cast in a superficial portrait of the civil rights-era Deep South. 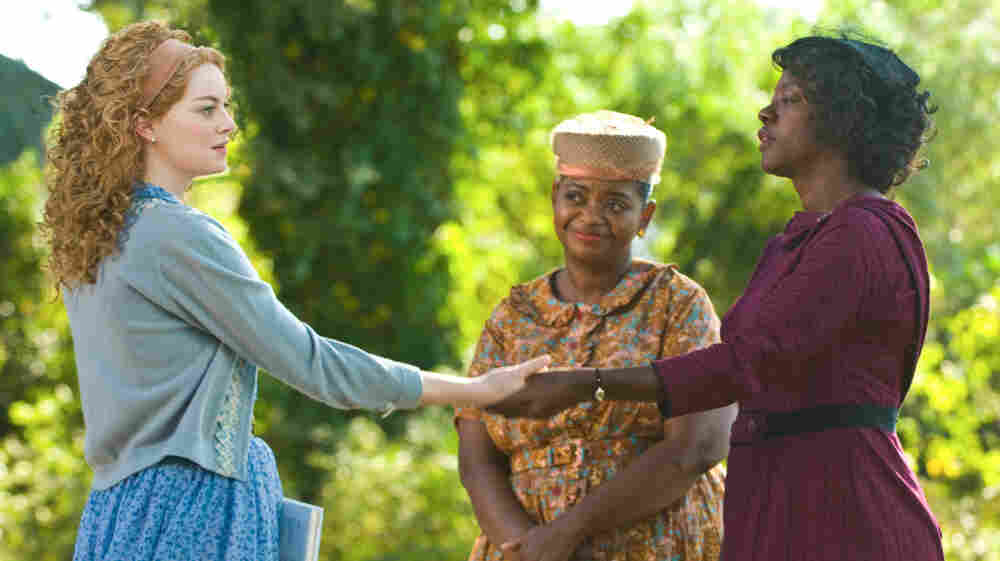 Help Me Help You: Skeeter Phelan (Emma Stone, left), a neophyte journalist in Mississippi, interviews housemaids Minny Jackson (Octavia Spencer, center) and Aibileen Clark (Viola Davis, right) about what it's like to work for white people. The Help aspires to be a three-hankie melodrama, but there's no steady directorial hand summoning the tears. Dale Robinette/Dreamworks Pictures hide caption

As the lights went down on a press screening of The Help, the very nice young woman next to me offered a tissue for the tears she fully expected both of us would be mopping up throughout. I'd done a little weeping while reading Kathryn Stockett's lively — if brazenly string-pulling — 2009 novel about black maids and their white mistresses in the Deep South. Yet while my neighbor had used up her hankie supply by the end of the movie, I left dry-eyed and disappointed.

Set in Mississippi on the cusp of the civil rights movement, Stockett's best-seller — based in part on her own family experiences — is deftly constructed and briskly paced. She has an attentive ear for multiple voices and a sympathetic feel for the ambivalent ties that bound the privileged lunching ladies of the Junior League to the black women who raised their children, just as they had been raised while their own mothers made the bridge club rounds.

Adapted and directed by Hollywood hopeful Tate Taylor, a childhood friend of Stockett's, The Help trots stolidly after the book, replicating its basic structure while ironing out the verve with which its nested stories unfold. Taylor has none of Stockett's feel for the seething impulses of character, and he has a clunky way with some serious acting talent. In fairness, Emma Stone, the exuberant young star of Easy A, may not be built for earnest melodrama, but she's unaccountably tamped-down as Skeeter, the spirited young daughter of white privilege who powers this tale of racism and tentative reconciliation.

In an effort to launch a career in journalism ("the last stop before marriage!" one of her lunch chums cries merrily) and uncover the secret behind the disappearance of her own beloved nanny (Cicely Tyson), Skeeter embarks on a series of clandestine interviews with Aibileen (Viola Davis), a stoical, middle-aged maid submerging her grief over the death of her own son in her love for the little white girl she's raising in the shadow of an indifferent young mother.

Cutting between their stories, Stockett produced a portrait of a community painfully and, at times, hilariously awakening to the demise of its discriminatory system. This is a hard thing to pull off without winking at an audience familiar with how this story continued. Where Stockett told her story from the inside, Taylor suspends it in historical quotes with heavy-breathing allusions to the death of President Kennedy, the shooting of Medgar Evers and, inevitably, the wicked fashion sense of Jackie O. 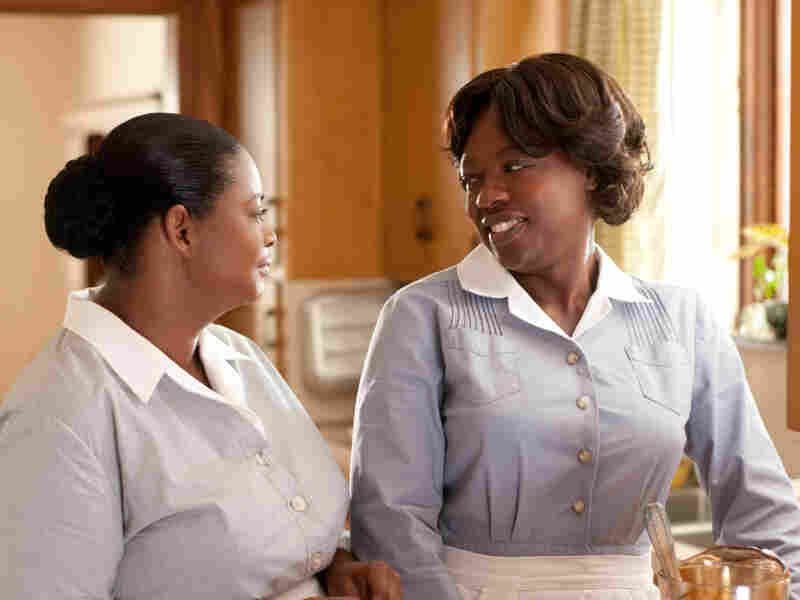 Fearing retribution from their employers, Minny and Aibileen are at first reluctant to share their stories, but they eventually come around to allow Skeeter a glimpse into their world. Dale Robinette/Dreamworks Pictures hide caption 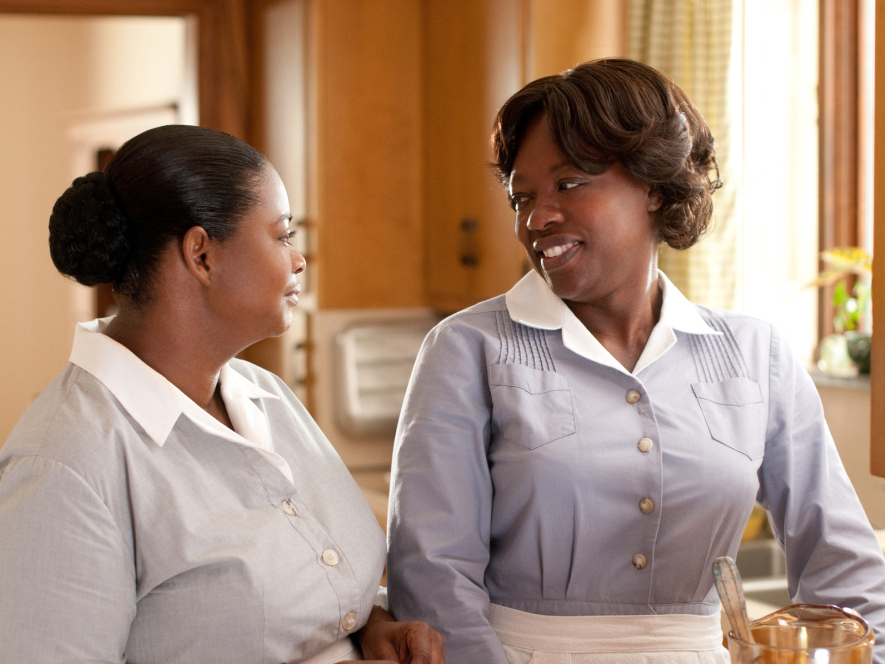 Fearing retribution from their employers, Minny and Aibileen are at first reluctant to share their stories, but they eventually come around to allow Skeeter a glimpse into their world.

Big hair, fine period frocks and interior design lend The Help a pleasingly retro look. Yet for someone who grew up in Mississippi, the director has little sense of place, unless you count one decidedly low-rent tornado and a few inside shots of a black church. Unlike Stockett, who might have been better off writing her own screenplay, Taylor has a tin ear for the vernacular speech of his own region. Much of the dialogue seems lifted from Margaret Mitchell, with the result that virtually no one escapes caricature, from Bryce Dallas Howard, anxiously overdoing a vicious housewife who has made it her life's mission to bar servants from their employers' bathrooms, to Sissy Spacek, marooned in an excruciating dotty-old-lady role as her mother, to Jessica Chastain as a good-hearted white-trash interloper trying to break into a circle as conscious of class as it is bigoted about color.

Worst of all, the pivotal figure of Minny (Octavia Spencer), a motor-mouthed maid with a gift for ruffling white feathers, has been broadened into something approaching a black mammy, then drafted, in the movie's last act, into an episode of The Jeffersons, complete with revenge in the form of chocolate pie containing suspect ingredients.

In his lumbering way, Taylor makes Stockett's story his own by expanding the book's mild lavatorial metaphors for the ill-considered farce that pretty much takes over the movie's last act. All of which shoves into the background some beautifully tempered acting by one of our great character actresses. Holding the line for intelligent restraint, Davis' Aibileen subtly navigates the blend of loyalty and rising anger that binds her to her employers, then leads her to break free. Under Davis' skillful hand, Aibileen emerges as the reluctant heroine of The Help, the dignified face of nonviolent resistance, and the one who argues wordlessly for the union between two people on opposite sides of the racial divide that ends this rather wishful tale.