Accessibility links
On Location: 'Touch Of Evil"s Border Showdown In this 1958 film, set in a fictional town on the U.S.-Mexico border, the line between good and evil is rarely easy to trace. But NPR's Claudio Sanchez thought the worst of Touch of Evil's portrayal of the border — until he took a closer look. 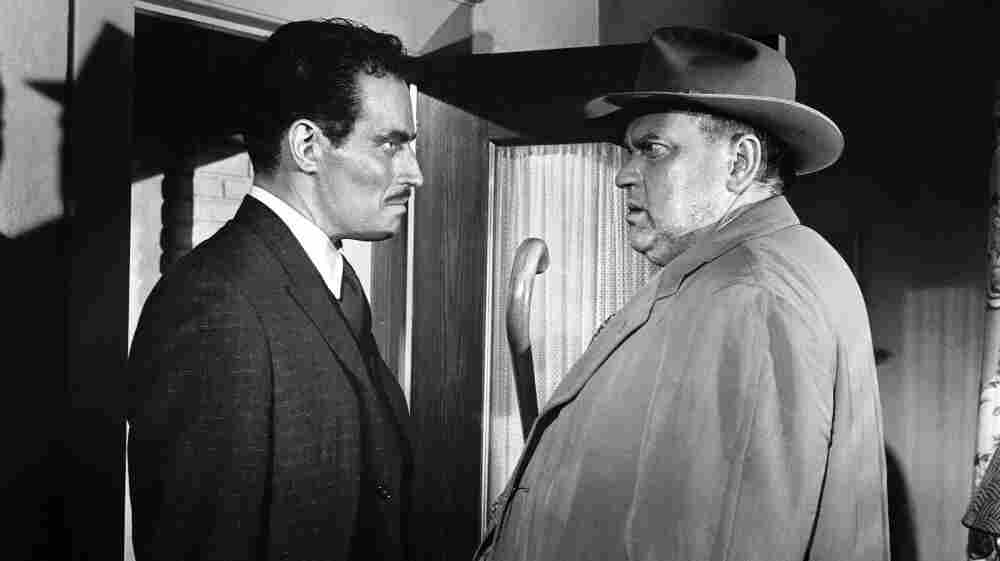 The first time I saw Orson Welles' Touch of Evil as a teenager, I hated it. After all, the U.S.-Mexico border, where the film is set, and which its famous opening tracking shot maps, is my true home, and it's a place that Touch of Evil depicts in the worst possible light: it's permissive, sleazy and ominous. Then there's the film's casting: Charlton Heston as a Mexican. Give me a break.

Even Henry Mancini's moody, Afro-Cuban score is geographically misplaced. Most people on the Mexican border are more likely to listen to norteno, mariachi or even country music.

Watch Clips From 'Touch of Evil'

Clearly, setting Touch of Evil in "Los Robles" — a fictional border town — allowed Welles to manipulate a lot of things. "It's what [Welles] imagines a border town to be," says Jimmy Mendiola, an independent filmmaker who admits to having a love-hate relationship with the film. "The opening scene tells us a lot. I mean, it's that scene that everybody talks about, that three-minute shot."

That opening scene by itself, in which the main characters and the camera cross the border, might qualify Touch of Evil for inclusion in our series, "On Location," which explores the places that define iconic movies. As the movie opens, the camera zooms in on a man holding a kitchen timer taped to several sticks of dynamite. Then, explains Mendiola, we see a "close-up of a bomb being put in a car. The car drives around and we get an introduction to the border city."

There's no denying that Touch of Evil's opening scene is mesmerizing. As it develops, that single take, considered one of the most audacious, breathtaking tracking shots ever filmed, pulls up and away from the car, panning across rooftops and dark alleys as it follows the unwitting victims in the convertible fishtail Cadillac as it meanders through the streets of Los Robles.

"All the way, it's shot [in] black and white, high-contrast, kind of raw," Mendiola says. "And it kind of all contributes to this anxiety people felt about Mexicans and the border: It's a dangerous place, kind of exotic. It's very sexy."

As the car approaches the U.S. port of entry, Charlton Heston and Janet Leigh walk into the scene. Heston, in dark makeup and wearing a razor-thin mustache, plays Ramon Miguel Vargas, a Mexican federal narcotics agent. Leigh plays his white American wife, Suzie. The pair walks arm in arm, with the car — and the bomb in its trunk — right beside them. "Do you realize this is the very first time we've been together in my country?" Leigh asks as they cross into the U.S. Heston wraps his arms around Leigh's waist and kisses her, just as the Cadillac, which has driven off, explodes.

Did Welles want Touch of Evil to be just another murder mystery? A B-movie with a touch of romance and menace? Or was he out to prove to Hollywood that he could take a mediocre story and turn it into a great movie? Another Citizen Kane?

"There's two ways to look at this movie, from my perspective," Mendiola says. "Analyzing depictions of Mexicans on the border, and then a more formal level of [the movie] as filmmaking. He's a great filmmaker, so he's found the subject matter that perfectly fit his stylistic interests."

Welles, in other words, didn't set out to make a documentary about the border. Besides, Universal Studios didn't want him to shoot anywhere near Mexico. So he settled on Venice, Calif., because, as he later explained, "it looked convincingly rundown and decayed."

In Los Robles, the Mexicans are one-dimensional, thuggish and amoral, except for one: Miguel Vargas.

"You have the Mexican as the hero of the film and that is very rare," says Charles Ramirez Berg, who grew up in El Paso, Texas, across the border from Ciudad Juarez in Mexico. Ramirez teaches film at the University of Texas, Austin, and wrote the book Latino Images in Film.

"I know Heston is not Latino and he has to play a Mexican and all that stuff," Ramirez says, "but still, the idea that you have the leading star in this film playing a Mexican — and the Mexican who's the hero — that's Orson Welles changing things up and making it that much more powerful."

Vargas isn't just a good Mexican. He's an educated Mexican, in a Hollywood movie made in 1958. Which is powerful, especially when you consider that in the novel that the film is based on, Badge of Evil by Whit Masterson, Heston's character is Anglo, not Mexican. In other words, Welles intentionally made Vargas the antithesis of Hollywood's traditional portrayal of Mexican characters.

On the other hand, Hank Quinlan, the film's American police captain in charge of the car bomb investigation, is a morally contemptible man played by Welles himself as the embodiment of evil, says Ramirez Berg.

"So it's about a dishonest cop and it's even worse because he's the most celebrated cop, and everybody thinks he's a hero. And yet he's thoroughly corrupt, and on top of that he's racist," Ramirez says.

That was one of the things that bothered me when I first saw Touch of Evil. Of course, there are racists on the U.S.-Mexico border. But the underlying racism tends to be subtle, veiled in paternalism and not nearly as blatant or obvious as Quinlan's.

Back in Los Robles, as his investigation into the car bombing unfolds, a lowly shoe salesman named Sanchez surfaces as the main suspect, and soon, an entourage of law enforcement types led by Quinlan and Vargas shows up at Sanchez's apartment, on the U.S. side of the border, to interrogate him. As they rifle through his private letters, Sanchez complains in Spanish. "I don't speak Mexican," Quinlan barks, before slapping Sanchez.

"That scene exposes the vulnerabilities of minorities in such a situation," Ramirez Berg says. "Minorities have no say, no rights, no nothing, and that's the way Quinlan wanted it. That's the way it's gonna go down."

But when Quinlan plants a couple of sticks of dynamite in Sanchez's apartment to make it look like he's the bomber, Vargas confronts him.

"It's supposed to be," says Vargas. "A policeman's job is only easy in a police state."

In having a Mexican cop lecture a U.S. cop about the presumption of innocence in a democracy, Welles turned the prevailing view of the Mexican border on its head. Looking at Touch of Evil through this prism, even the absurdity of Charlton Heston as a Mexican now seems more tolerable. As Jimmy Mendiola and Charles Ramirez Berg have noted, Welles, to his credit, subverted expectations, all the way up to the film's resolution.

When the credits roll, though, I think that maybe Welles should have ended Touch of Evil with the scene in which Vargas tries to explain the border to his wife, Suzie.

"This isn't the real Mexico, you know that," Vargas says. "All border towns bring out the worst in a country."

For the most part, that's the one thing that people who grew up on the border will agree is true.