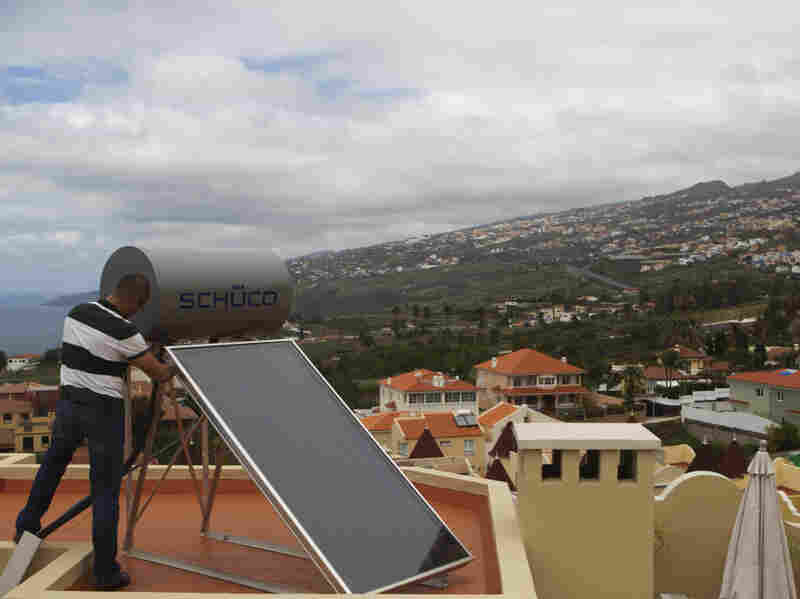 A worker installs a solar panel on the roof of a house in Santa Cruz de Tenerife in the Spanish Canary Island of Tenerife in March 2011. The country's solar sector intends to double its contribution to the national grid by 2020, after an earlier government attempt at boosting the industry failed. Santiago Ferrero/Reuters /Landov hide caption

The streets of Madrid are sizzling in the summer. The sun bears down on everything — including the solar panels dotting houses, offices and even parking meters. Solar energy makes sense in Spain, and it's attracted people like Juan Casanovas.

Casanovas says he first became interested in the solar industry in 2003 "because it's a democratic way to generate electricity." He says people can become self-sufficient in energy.

It's also a sector with green jobs — an area that President Obama and the his administration are looking to as a possible antidote to the high unemployment rate in the U.S.

But Spain, which is facing serious economic problems, also provides a cautionary tale about overreaching.

Consider the experience of Casanovas. He taught himself how the industry worked, and then began consulting for companies looking to build solar plants.

In 2007, the Spanish government offered incentives for solar energy, offering to pay 40 cents for each kilowatt-hour generated by solar power. By comparison, consumers pay about 12 cents per kilowatt-hour at home.

That triggered a huge rush in Spain — installers were trained and deployed across the country, and 40,000 projects were completed within two years.

"It was an absolute surprise," says Tomas Diaz, who represents ASIF, the Spanish photovoltaic industry association. "Everybody was saying, 'There's some kind of mistake, because that's impossible."

It wasn't impossible. But it did turn out to be unsustainable. As clouds formed over the Spanish economy, the government was strapped for cash and had to cut back on the subsidies. The sector crashed. Investments froze. Many solar businesses fizzled, or went abroad. Industry sources say up to 5,000 people lost their full-time jobs, including Casanovas.

Despite these setbacks, the industry is regrouping. Censolar — a company based in the sun-drenched southern city of Sevilla — provides remote training for people who still want to get into the solar industry. Enrollment is down from the boom years, according to Enrique Carmona from Censolar, but people are still applying.

"There's interest, but the economy's really bad in Spain. People just don't have money to invest in education," Carmona says.

And it's tougher for Censolar's graduates to find jobs these days. Alberto Soria, one of the teachers, faults his government.

"What happened in Spain we call a crash, but really it's the result of poor planning by the government," he says.

Isidoro Tapia is the secretary general of IDEA, the government agency responsible for promoting renewable energy.

"We had a plan. The thing was that our plan was surpassed by the reality," Tapia says.

The agency is working on a new plan now, and he says the U.S. can learn from Spain's experience. He cautions against overextending the industry, but says you still have to be ambitious.

"You have to set ambitious targets to make this sector move," he says.

Miquel Munoz, who studies renewable energy at Boston University's Pardee Center, agrees. He says the U.S. government must create the right conditions for these investments.

In Spain, its solar sector has shown signs of recovery despite the country's larger economic problems. In Madrid, Juan Casanovas has once again found work in solar energy. "I believe in it, and I want to keep fighting," he says.

And he is not alone. Spain's solar sector has set the ambitious target of doubling its contribution to the national grid by 2020.