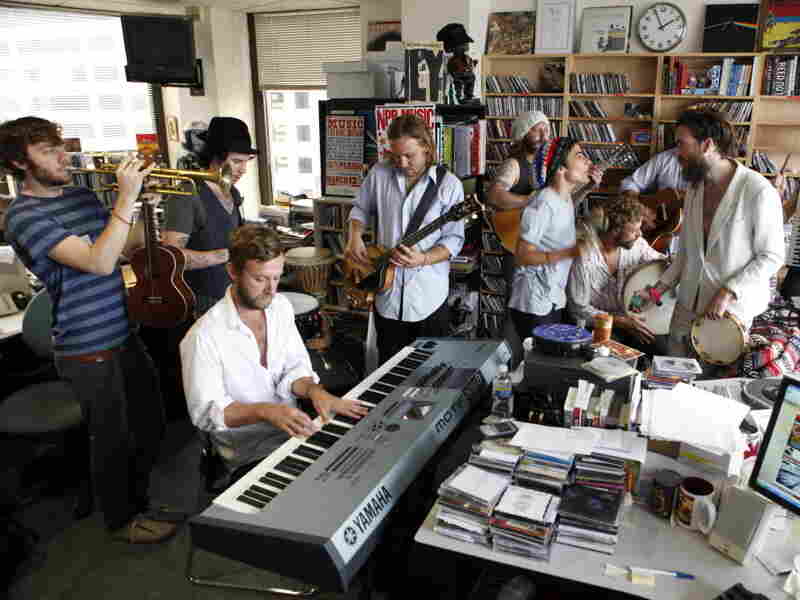 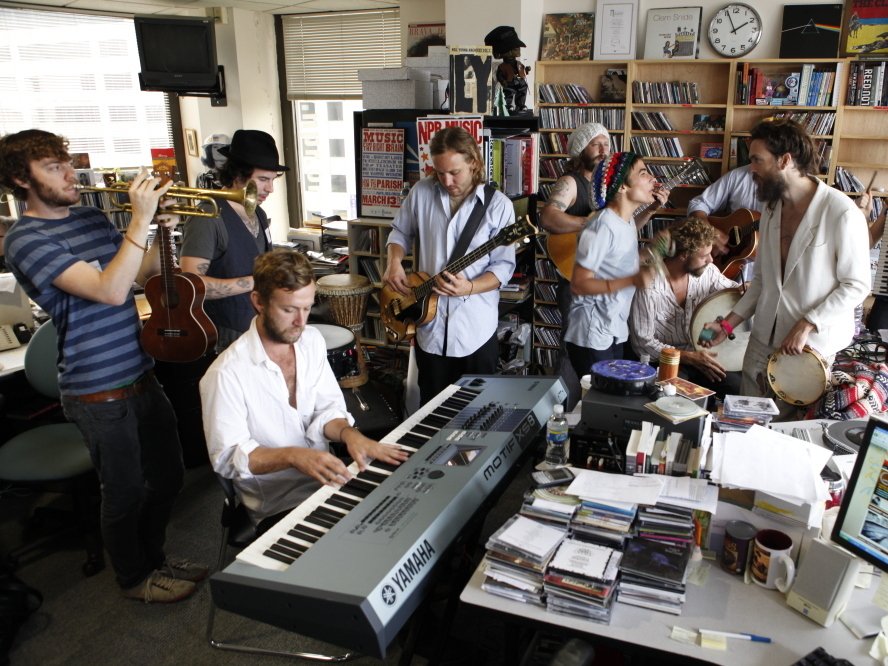 After close to 150 performances captured on video, we figured it was time for a look back at one of NPR Music's most unpredictable creations: Tiny Desk Concerts. Originally conceived as a way for quiet artists to be heard without the din of noisy club crowds, the series quickly expanded in focus. These days, a New Orleans brass band or a dubstep duo is just as likely to set up shop behind Bob Boilen's desk.

On this episode of All Songs Considered, Bob and NPR Music editor Stephen Thompson share their stories of the most moving and surprising moments from three and a half years of live music in the NPR offices. Listen to the show and watch the videos — then subscribe to the podcast or check out the full Tiny Desk Concert archive for more. 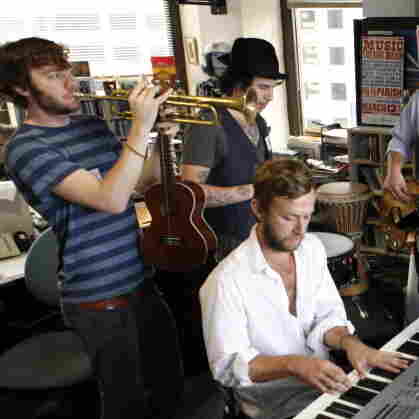 Bob: "I remember saying to the leader of the band, Eugene Hutz, 'Do you guys need something to drink?' And out of a big paper bag he pulls a very chilled, huge bottle of vodka and says, 'Do you have glasses?'"

Stephen: "Not the first noisy artist to play the Tiny Desk, but still the biggest band ... The godfather of go-go music did not strip his sound down for the occasion whatsoever. And, because he's Chuck Brown, we indulged his every whim."

Stephen: "It's a very unusual-looking crop of very committed musicians, with this beautiful, communal vibe to them that really comes through."

Stephen: "Unbelievable volume, unbelievable power ... 'Laundry Room' is probably the individual song performance at a Tiny Desk Concert that I have listened to the most."

Songs: "Laundry Room," "Down With the Shine," "Bella Donna"

Bob: "I always love performers whose speaking voice is so different — such a disconnect from their singing voice."

Stephen: "She also has this absolutely magnificent cackle. Right at the end of the set, she's like, 'Forgot to take my gloves off, hahahaha!' You just can't believe this incredibly delicate instrument is also tuned to that cackle. Marvelous, marvelous performance."

Songs: "Someone Like You," "Chasing Pavements," "Rolling in the Deep"

Bob: "I imagined he would come with a backing track or something — I didn't know how he was going to do this. But this single guitar player, and Tom Jones' voice, was absolutely astonishing."

Bob: "A baritone ukulele and a guitar-bass hybrid. These are two old friends who have been making music for a long time — super-powerful, angular music."

Songs: "Your Face Left Before You," "Sleep Gets Your Ghost," "Revel in Contempt," "Medulla Oblongata"

Stephen: "We have to turn off the air-conditioning units when the bands start to perform, because you get a low hum if you leave them on. And we have gigantic picture windows — sort of like ants under a magnifying glass, with no air conditioning and probably 150 people streaming in to see Phoenix, one of the biggest bands we've had play ... Just imagine the engines of NPR wheezing to a halt for about 10 minutes."

Bob: "Anyone who's into any kind of virtuosity in music should watch ... There's something going on that doesn't really look humanly possible."

Stephen: "They played in metal bands, and somehow found a way to fuse it with flamenco music on nylon strings. That's one of those things where I feel like the target audience is anyone. You just have to love that."

Bob: "There's that one moment in 'When Your Mind's Made Up,' where it builds to an explosive guitar moment ... and then it stops."

Stephen: "And there's this buildup of nervous tension that then dissolves into laughter."