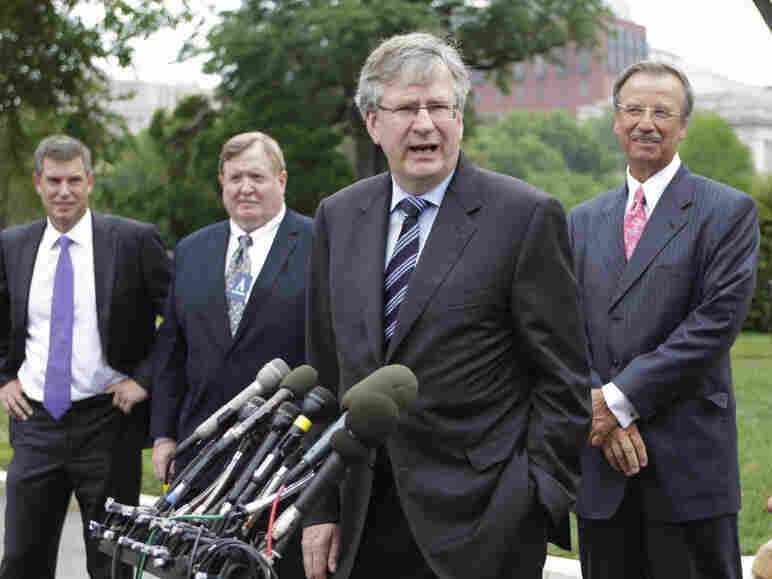 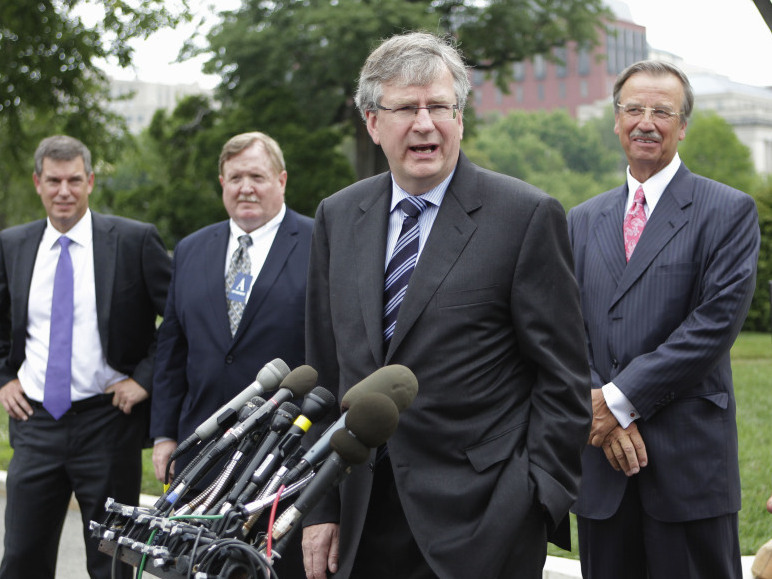 Daimler Trucks North America President and CEO Martin Daum, center, speaks with reporters outside the White House Tuesday after he and other executives met with President Obama to discuss new fuel efficiency standards.

The Obama administration announced Tuesday the first ever fuel efficiency standards for larger trucks and buses. New vehicles sold in 2018 will go up to 20 percent farther on a gallon of fuel. So far, the truck manufacturing industry is welcoming the rules.

Outside the White House today, the heavyweights of the truck manufacturing industry took the microphone one after another.

"We're happy to be part of this. We really appreciate the process," says Denny Slagle, CEO of Mack Trucks.

"We welcome the challenge and think it's a win all the way around; for the customers, for the industry and for all of us that participate in it," says Rich Freeland, president of the engines division at Cummins.

Freeland says his business is strong. Although the fuel economy targets are tough, he says it's easy for his industry to like this rule.

"This one lines up really well with what customers want. And they want fuel economy," he says.

The rule applies to all kinds of vehicles, from school buses to garbage trucks to big rigs. Freeland says his company will be able to cut fuel use by making pollution control devices more effective.

"You can actually run the engine more efficiently if you're able to catch [it]...before it comes out the tailpipe," he says.

Ron Medford, deputy administrator of the National Highway Traffic Safety Administration, says the impetus for the rules came in part from an unlikely source: the industry asked the Environmental Protection Agency to create them.

Truck and engine manufacturers wanted to avoid multiple rules. But Congress asked the National Highway Traffic Safety Administration to come up with one set. And the Supreme Court told the EPA to regulate greenhouse gas emissions. California also wanted to regulate global warming pollution from trucks.

The new standards also are designed to reduce dependence on foreign oil. The administration predicts they will cut oil consumption by 530 million barrels over the life of vehicles built from 2014 to 2018.

Medford says it will cost a little extra to buy these trucks and buses, but fuel savings will more than make up for that.

For a larger truck, like a big rig, the savings could be even greater. A company might have to pay an extra $6,200 dollars. But it will save nearly $80,000 in diesel over the life of that truck.

At Interstate Relocation Services, a moving company in Springfield, Va., Bud Morrissette predicted the rule will keep costs down for himself and his customers.

"Trucks are really the lifeblood of the American economy," Morrissette says. "Everything that we consume--be it clothing, be it food--is really delivered by a truck. So it's something that I think will touch across all walks of life."

Environmentalists like the rule, too. It follows an announcement last month of a deal between President Obama and the auto industry to tighten fuel economy for cars and light trucks. David Friedman from the Union of Concerned Scientists says together these rules will go far to fight global warming and decrease America's dependence on foreign oil.

"America is going to save more oil by 2030 than we currently import from the Persian Gulf," Friedman predicts.

The new truck rules aren't strict enough to force a switch to hybrid technology. Environmentalists plan to push for regulations that would do that after 2018.