Accessibility links
Hugh Herr - 'The Double-Amputee Who Designs Better Limbs' Nearly 30 years ago, Hugh Herr lost both of his legs in a climbing accident at age 17. Today, he runs the Biomechatronics group at the MIT Media Lab and designs better prosthetic limbs for other amputees. 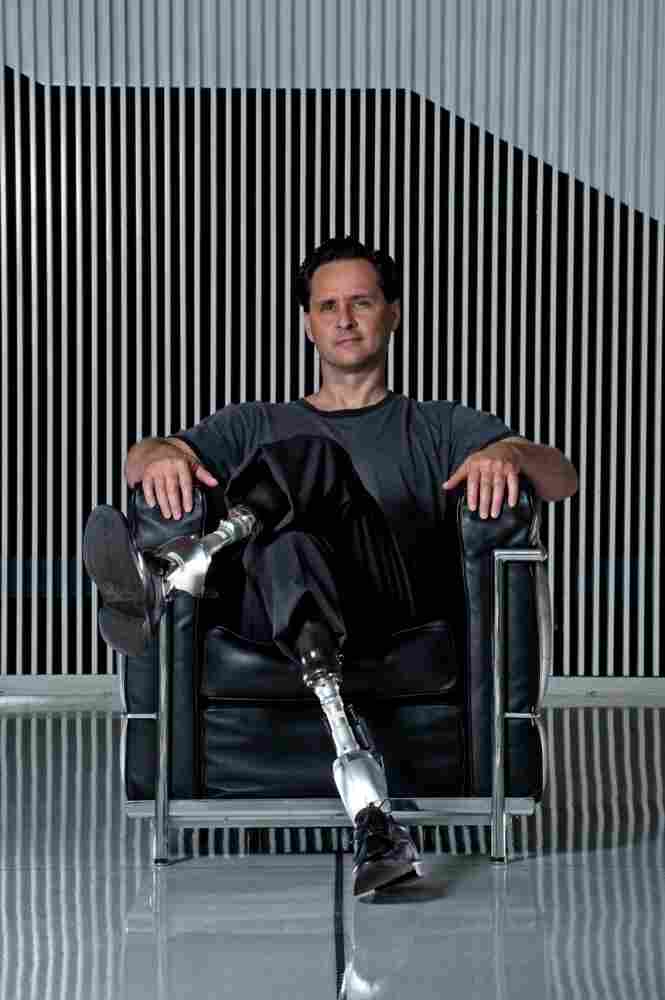 Hugh Herr is a biophysicist and rock climber. He is the holder or co-holder of 10 patents related to prosthetic devices. Len Rubenstein/Crown Business hide caption 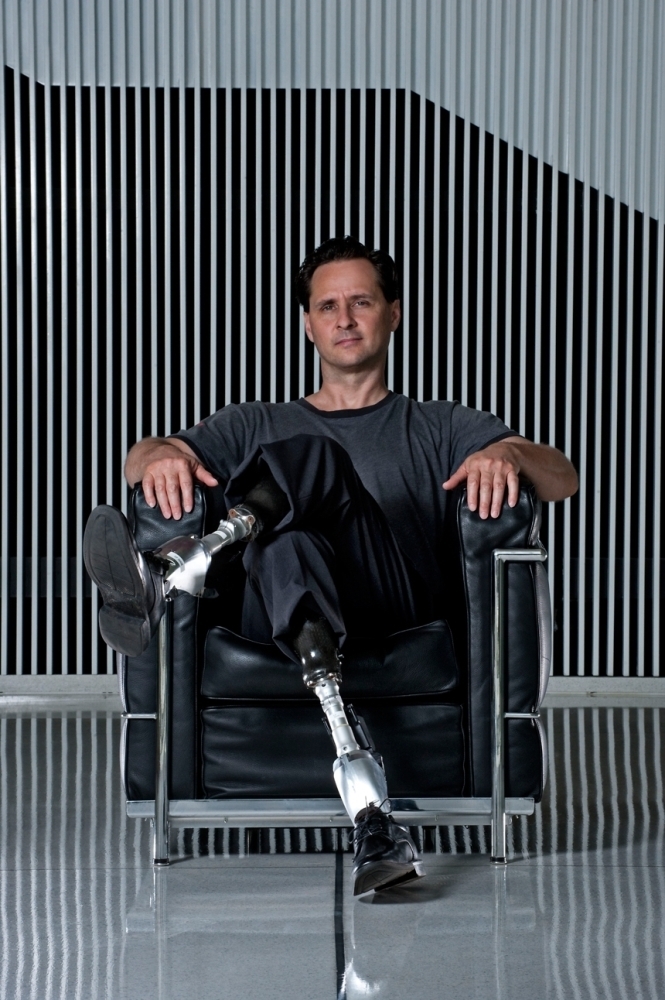 Hugh Herr is a biophysicist and rock climber. He is the holder or co-holder of 10 patents related to prosthetic devices.

Hugh Herr's legs were amputated below his knees in 1982 after a climbing accident. From his knees down to the floor, he's completely artificial.

"I'm titanium, carbon, silicon, a bunch of nuts and bolts," he tells Fresh Air's Terry Gross. "My limbs that I wear have 12 computers, five sensors and muscle-like actuator systems that able me to move throughout my day."

But Herr doesn't just wear artificial legs. He designs them, too. As the director of the Biomechatronics Group at the MIT Media Lab, Herr and his team are responsible for creating prosthetic devices that feel and act like biological limbs. They are also one of the subjects of Frank Moss' new book, The Sorcerers and Their Apprentices: How the Digital Magicians of the MIT Media Lab are Creating the Innovative Technologies That Will Change Our Lives.

Moss, the former head of the MIT Media Lab, profiles several of the researchers who are working on inventions that could change the way we move, socialize and interact with computers.

The prostheses Herr and his team have designed allow users with below-the-knee amputations to still participate in a variety of physical activities — depending on which pair of legs they're wearing. 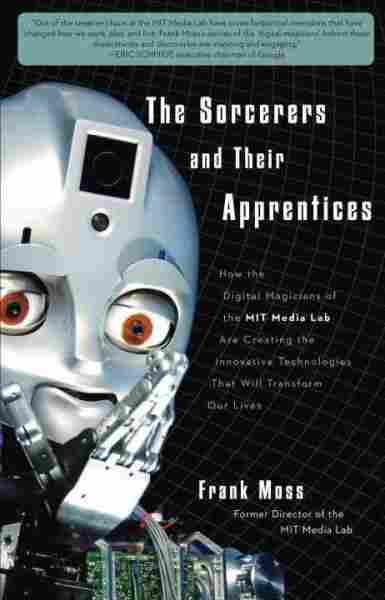 The Sorcerers and Their Apprentices

"When you go into my closet, there are many, many pairs of legs. I have a running pair, I have a bionic walking pair, limbs that are waterproof," he says. "I have various legs to climb mountains and to sense steep ice walls, other feet that wedge into small rock fissures [and] others that stand on small rock edges the width of a coin."

Herr's lab has also created an artificial knee that can be used by people with above-the-knee amputations and a bionic foot-and-ankle prosthetic device that is used by many veterans from wars in Iraq and Afghanistan.

"It's actually common for the user to say, when they first try the biome technology [in the bionic foot], 'I have my leg back,' " he says. "We've had one fellow lose close to 30 pounds after using the device for a few months because he's walking so much more. Another person doesn't use the handicap placard — so the device has already had deeply profound effects on quality of life."

Herr lost his own legs when he was 17. He was ascending Mount Washington in New Hampshire with another climber when the two men were caught in a blizzard. They became disoriented and descended into a ravine, where they spent four days trying to stay alive by hugging each other to keep warm. A rescuer spotted them on the fourth day and the two men were rescued.

"We suffered some severe frostbite and hypothermia because of the frostbite. ... Our physical condition, to me, was the least of my concern. We were plucked from the mountain and we were told that a volunteer rescuer had died [trying to rescue us] from an avalanche. The news of that was just horrible, so I really didn't care what was happening with my physical body. I was just devastated by the news that a fellow climber had perished."

For several months, a medical team tried to save Herr's limbs. He had multiple surgeries to clean his tissue and try to restore his circulation. In mid-March of 1982, both of his legs were amputated. 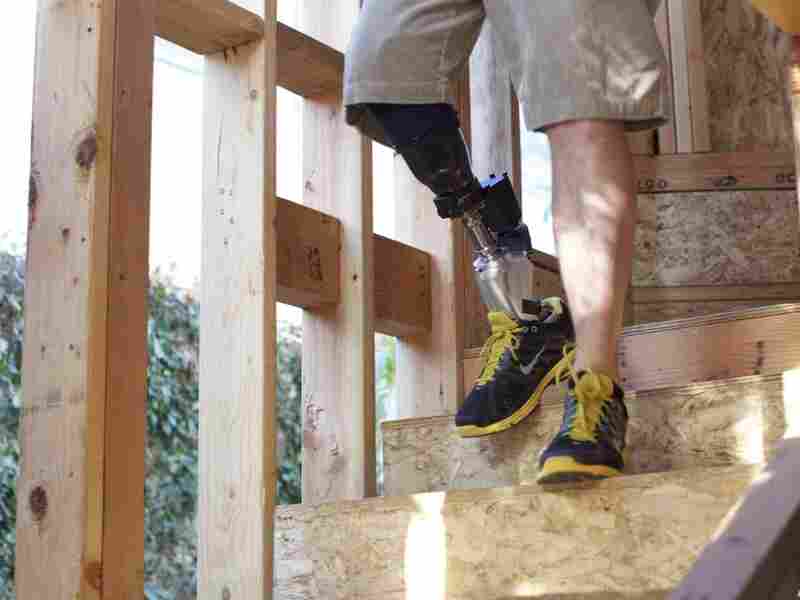 Hugh Herr's PowerFoot BiOM is the first bionic lower leg system that relies on robots to transition users from one step to the next. Courtesy of iWalk 2011 hide caption 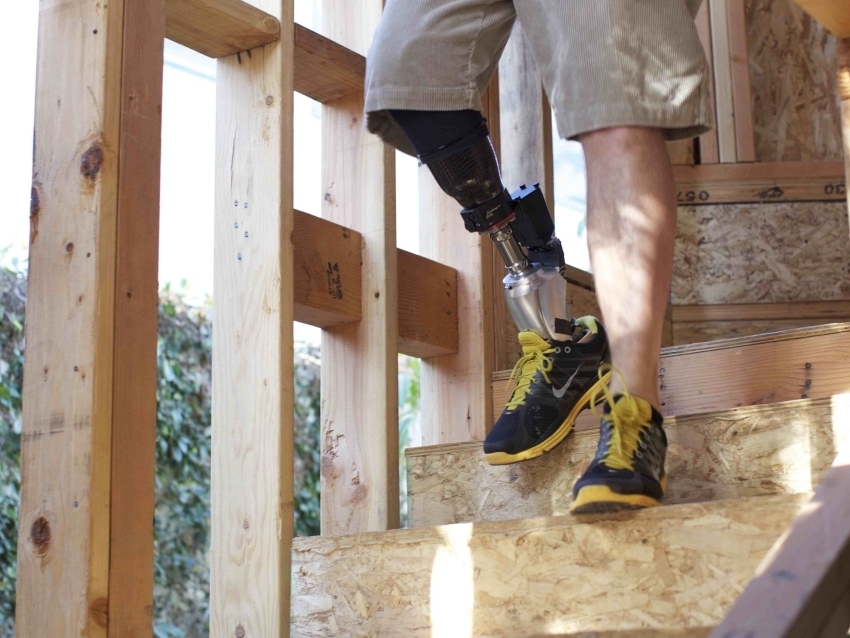 Hugh Herr's PowerFoot BiOM is the first bionic lower leg system that relies on robots to transition users from one step to the next.

"I was aware going into surgery that I would lose my feet," he says. "When I awoke from the surgery and I looked at my legs, I was shocked at how high the amputation was and how short my legs had become."

After his amputations, Herr says, he became motivated to do something worthwhile with his life to honor the memory of the rescuer who had died trying to save him. He went to college and then received advanced degrees from MIT and Harvard in mechanical engineering and biophysics. As a post-doc, he began working to develop better limb prostheses — and has since become one of the leading experts in the field.

"After the accident, I dreamed of returning to my chosen sport of mountain climbing," he says. "So it immediately became apparent to me that what I needed to do was design my own artificial limbs. I had training in machining and carving metals and woods and making artifacts. And I went into the shop and started grinding and cutting and designing various limbs that were conducive to the vertical world of rock and ice climbing."

"My biological body will degrade in time due to normal, age-related degeneration. But the artificial part of my body improves in time because I can upgrade. ... So I predict that when I'm 80 years old, I'll be able to walk with less energy than is required of a person who has biological legs, I'll be more stable, and I'll probably be able to run faster. ... The artificial part of my body is, in some sense, immortal."

On the aesthetic beauty of his artificial limbs

"We want the bionic limb to have a humanlike shape but we don't want the bionic leg to look human. We want it to look like a beautiful machine, to express machine beauty as opposed to human beauty — and the reason is, we want the user to pull a black sock over their bionic limb and have their limb appear to be fully biological and then the very next evening, go to a fancy party where they pull that sock off and they expose the fact that part of their body is bionic."

"Initially I put a climbing boot over the prosthetic foot and then I said, 'That's silly' and I threw out the shoe. I realized that the foot need not look like a human foot. To climb a vertical rock face, I really don't need a heel — so I cut off the prosthetic heel and I started optimizing the angle of the foot relative to the calf of the prosthesis. My rock climbing feet are the size of baby feet. They're very, very small and very, very short so I can get the center of my body over my feet on a vertical wall."

"I predict that as we march into this 21st century, the changes we'll see in prosthetic designs [will be that] the artificial prosthetic will become more intimate with the biological human body. There will be a mergence, if you will. The prosthesis will be attached to the body mechanically by a titanium shaft that goes right into the residual bone, wherein you can't take the artificial limb off. Another intimate connection will be electrical. The nervous system of the human will be able to communicate directly with the synthetic nervous system of the artificial limb."