Accessibility links
Movie Reviews - 'The Help' - Emma Stone and Viola Davis star in the film adaption of Kathryn Stockett's best-selling novel about a white woman who sets out to tell the story of black domestic servants in 1960s Mississippi. Critic David Edelstein says that both Stone and Davis pull off stunning performances. 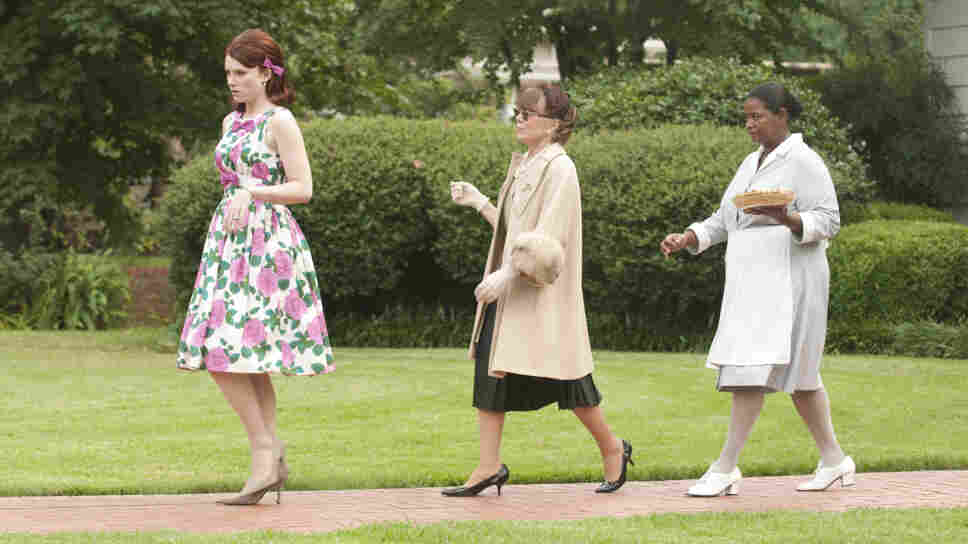 Bryce Dallas Howard (from left), Sissy Spacek and Octavia Spencer star in The Help, based on a novel by Kathryn Stockett. Dale Robinette/Dreamworks Pictures hide caption

Few fictional films wear their political messages as proudly or loudly as The Help, which centers on black female domestic servants in Jackson, Miss., in the early 1960s and a 23-year-old white woman who induces them to tell their stories for a book to be called, appropriately enough, The Help.

Emma Stone plays the perky white woman, Eugenia Phelan, nicknamed Skeeter, who returns from college to find her wealthy family's maid — who essentially raised her — gone under mysterious circumstances and her friends married with kids and black maids of their own. After Skeeter talks her way into a newspaper job writing a column on housekeeping — a subject about which she knows nothing — she reaches out for advice to her friend Elizabeth's maid, Aibileen, played by Viola Davis. But as racial tensions intensify and her snooty friends reveal their true segregationist selves, Skeeter prevails on Aibileen to give her more than household cleaning tips.

"You know what she would do to me if she knew I was telling stories on her?" asks Aibileen.

"Well, I was thinking we wouldn't have to tell her," says Skeeter. "The other maids would have to keep it a secret too."

"I was hoping to get four or five to show what it's really like in Jackson," says Skeeter.

Getting those other maids turns out to be a problem, until the insults become even harder to bear. The imperious Hilly Holbrook, played by Bryce Dallas Howard, announces it's unhygienic to let black people use the house toilets and directs her friends to build outhouses. Then Hilly dumps her aging mother's maid, Minny, played by Octavia Spencer, for being what's often called "sassy." Although Medgar Evers has just been murdered and the KKK is on the prowl, Minny finally agrees to talk to Skeeter, too. But not before she lays down the law.

"I'm going to do it but I need to make sure you understand this ain't no game," says Minny. "I need to see you square on at all times." 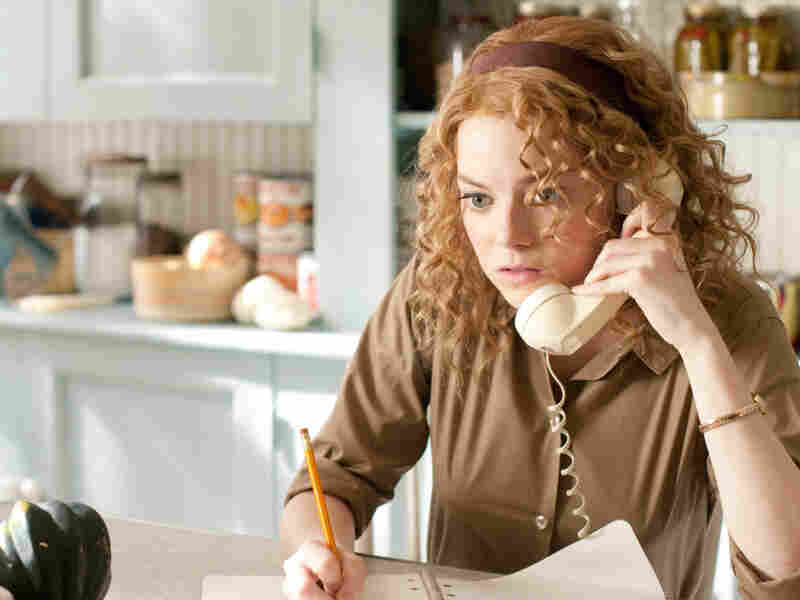 Skeeter Phelan (Emma Stone), an aspiring writer, listens to advice from her editor in New York as she embarks on a secret writing project that puts her, and especially the women she is working with, at great risk. Dale Robinette/Dreamworks Pictures hide caption 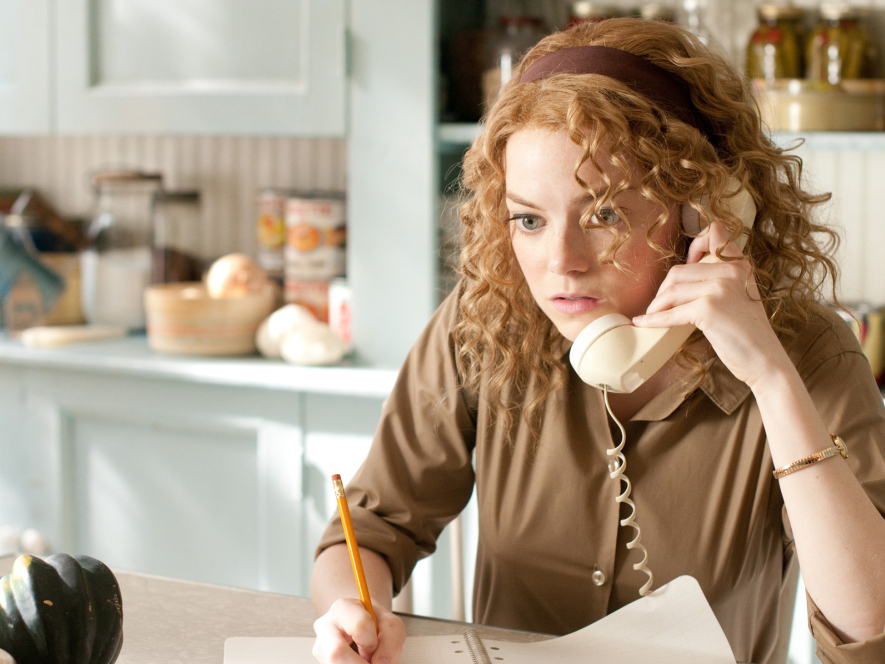 Skeeter Phelan (Emma Stone), an aspiring writer, listens to advice from her editor in New York as she embarks on a secret writing project that puts her, and especially the women she is working with, at great risk.

The Help is based on a novel by Kathryn Stockett both beloved for opening white eyes to the vantage of maltreated servants and attacked, in some quarters, as a white author's appropriation of black women's experience. Some of Stockett's critics have gone so far as to say she actually romanticizes domestic servitude by depicting black nannies' genuine love for the white children in their care. They also say the novel is full of stock characters that reinforce classic African-American stereotypes like the "sassy" maid and the shiftless, abusive husband.

Director Tate Taylor has a dull, square style with too many close-ups — but the faces we get close to are great ones. Stone is amazingly vivid, at once blurty and brainy, and villainess Howard lifts her nose and slits her eyes with aplomb. Jessica Chastain plays a handsome rich guy's hot, uneducated wife who hires Minny on the sly to teach her how to clean and cook. The character has been simplified — in the novel she's scarily unstable — but Chastain makes her helplessness hilarious. Allison Janney triumphs over countless banalities as Skeeter's oblivious mother, and Sissy Spacek has some funny scenes as Hilly's mom, derisive toward her daughter even in her dottiness.

Spencer's Minny is indeed a stereotype, but she charges into the frame and gives her scenes a lift. The center of The Help is Davis, who has eyes unlike other actress's. They're hard, unyielding, with no giveback, softening only for the neglected little girl in her care. It's a tough, beautifully judged performance. The weak, weepy, uplifting ending is odd given Mississippi's imminent eruption, but there will be wet hankies everywhere. The Help is the highest form of middlebrow.