Accessibility links
Police Calm London, But Riots Flare Across UK London has nearly tripled the number of police on the streets in an attempt to quell a wave of looting and violence, the worst the country has seen since race riots set the capital ablaze in the 1980s. Unrest that began in London has now spread to other British cities.

Thousands more police officers flooded London streets Tuesday in a bid to end Britain's worst rioting in a generation as nervous shopkeepers closed early and some residents stood guard to protect their neighborhoods. An eerie calm prevailed in the city, but unrest spread across central and northern England on a fourth night of violence driven by poor, diverse and brazen crowds of young people.

Scenes of ransacked stores, torched cars and blackened buildings frightened and outraged Britons just a year before London is to host the Olympics. London's Metropolitan Police force said Tuesday it would flood the streets with 16,000 officers. The department said a large presence would remain in the city through the next 24 hours at least.

"We have lots of information to suggest that there may be similar disturbances tonight," Cmdr. Simon Foy told the BBC. "That's exactly the reason why the [police force] has chosen to now actually really 'up the game' and put a significant number of officers on the streets." 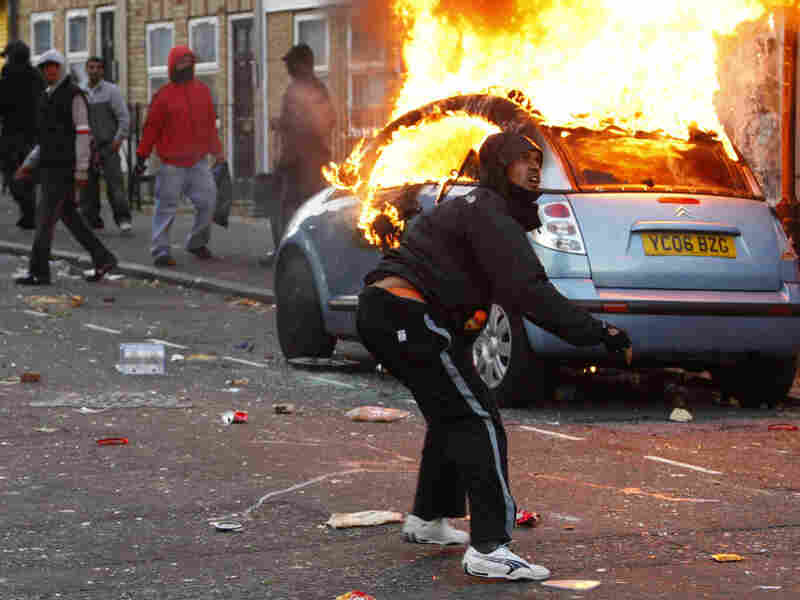 A rioter throws a rock at riot police in Clarence Road in Hackney, London, Monday. The wave of violence has spread to three other major British cities. The riots appeared to have little unifying cause — though some involved claimed to oppose sharp government spending cuts, which will slash welfare payments and cut tens of thousands of public sector jobs through 2015. Dan Istitene/Getty Images hide caption

In Manchester, which previously hadn't seen violence, police began making arrests Tuesday as youths rampaged through the center of the northwestern city. Firefighters said a clothing store in the city center and a disused library in nearby Salford were set on fire.

Assistant Chief Constable Terry Sweeney of the Greater Manchester police department urged residents to avoid the city center. "A handful of shops have been attacked by groups of youths who have congregated and seem intent on committing disorder," he said.

Degree Of Frustration With Response

The riots started Saturday with a protest over a police shooting in London's Tottenham neighborhood but have morphed into a general lawlessness in London and several other cities that police have struggled to halt with ordinary tactics. While the rioters have run off with sneakers, bikes, electronics and leather goods, they also have torched stores apparently just for the fun of seeing something burn.

Rioters, able to move quickly and regroup to avoid the police, were left virtually unchallenged in several neighborhoods, plundering stores at will.

Stores, offices and nursery schools in several parts of London closed early amid fears of fresh rioting Tuesday night, though pubs and restaurants were open. Police in one London district, Islington, advised people not to be out on the streets "unless absolutely necessary."

In central England, police said they made five arrests in Birmingham and dispersed a small group of people who torched two cars in the center of West Bromwich, a nearby town. Shops were targeted by rioters in the city of Wolverhampton, police said.

In London, riots and looting have flared from gritty suburbs along the capital's fringes to the posh Notting Hill neighborhood. The disorder has caused heartache for Londoners whose businesses and homes were torched or looted, and a crisis for police and politicians already staggering from a sputtering economy and a scandal over illegal phone hacking by a tabloid newspaper that has dragged in senior politicians and police.

People are seeing images of lines of police literally running away from rioters. For young people that is incredibly empowering. They are breaking the rules. They are getting away with it. No one is able to stop them.

"The public wanted to see tough action. They wanted to see it sooner and there is a degree of frustration," said Andrew Silke, head of the criminology department at the University of East London.

So far more than 560 people have been arrested in London and more than 100 charged, and the capital's prison cells were overflowing. Several dozen more were arrested in other cities.

Silke said it will be hard to control the rioting until police make larger numbers of arrests.

"People are seeing images of lines of police literally running away from rioters," he said. "For young people that is incredibly empowering. They are breaking the rules. They are getting away with it. No one is able to stop them."

The leader of a British far-right group says its members are taking to the streets of British cities in an attempt to quell the riots.

Stephen Lennon, leader of the English Defense League, told The Associated Press that up to 1,000 members planned to turn out in Luton, where the group is based, and others areas that have suffered unrest, including the northwestern city of Manchester.

Lennon said some members were already carrying out patrols trying to deter rioters, and that hundreds more would join them Wednesday.

In an interview with NPR's Michele Norris, London's Deputy Mayor Kit Malthouse acknowledged that the authorities were caught off guard.

"To be honest, we were a little surprised about — well, quite a lot surprised, actually — about the level of the violence," he said. "It goes without saying that we were unprepared for the scale of the problem. We put more police officers on last night than we had on on Saturday or Sunday, and we will have even more on tonight to make sure that we deal with this problem. It's just taken us a bit of time to mobilize, I'm afraid."

In the end, though, Malthouse said he believed there had been "an awful lot of rationalization of criminal activity."

"I think that's fundamentally what it is. It is criminal activity, pure and simple. It's driven by greed, avarice and a desire to just grab other people's property," he said.

"I think you can try and confect some kind of complicated sociological argument about people's motivations for that criminality, but I think that's getting them off the hook. There is no excuse for it, absolutely none whatsoever," he told Norris.

Alison, a London woman who did not want NPR to use her full name

London's beleaguered police force noted that it received more than 20,000 emergency calls on Monday — four times the normal number. Scotland Yard has called in reinforcements from around the country and asked all volunteer special constables to report for duty.

A soccer match scheduled for Wednesday between England and the Netherlands at London's Wembley Stadium was canceled to free up police officers for riot duty.

Police launched a murder inquiry after a man found with a gunshot wound during riots in the South London suburb of Croydon died of his injuries Tuesday. Police said 111 officers and 14 members of the public were hurt over the three days of rioting, including a man in his 60s with life-threatening injuries.

Prime Minister David Cameron — who cut short a holiday in Italy to deal with the crisis — recalled Parliament from its summer recess for an emergency debate on the riots and looting. He described the scenes of burning buildings and smashed windows as "sickening," but he refrained from tougher measures such as calling in the military to help police restore order.

"People should be in no doubt that we will do everything necessary to restore order to Britain's streets and to make them safe for the law-abiding," Cameron told reporters after a crisis meeting at his Downing Street office.

Parliament will return to duty on Thursday, as the political fallout from the rampage takes hold. The crisis is a major test for Cameron's Conservative-led coalition government.

Violence first broke out late Saturday in the low-income, multi-ethnic district of Tottenham in North London, after a protest against the fatal police shooting of Mark Duggan, a 29-year-old father of four who was gunned down in disputed circumstances on Aug. 7.

Police said Duggan was shot dead when officers from Operation Trident — the unit that investigates gun crime in the black community — stopped a cab he was riding in.

The Independent Police Complaints Commission, which is investigating the shooting, said a "non-police firearm" was recovered at the scene but that there was no evidence it had been fired — a revelation that could fuel the anger of the local community.

An inquest into Duggan's death was opened Tuesday, though it is likely to be several months before a full hearing.

Duggan's death stirred memories of the 1980s, when many black Londoners felt they were disproportionately stopped and searched by police. The frustration erupted in violent riots in 1985.

Relations have improved since then but tensions remain, and many young people of all races mistrust the police.

Others pointed to rising social tensions in Britain as the government slashes $130 billion from public spending by 2015 to reduce the huge deficit, swollen after the country spent billions bailing out its foundering banks.

A London woman named Alison, who was fearful of giving her full name, told NPR's Philip Reeves that it is important to remember the suffering of the working class.

"What do they expect? You know what, my 21-year-old goes out there every single day looking for work, and there's no work, yet still he will get penalized in this country for not having a job," she said.

The British leaders now scrambling to restore order have been battered by scandals that include expenses claims by members of Parliament, cozy relations with Rupert Murdoch's tabloid newspapers, and bankers' bonuses.

Alison says the government is simply out of touch.

In Croydon, fire gutted a 140-year-old family-run department store, House of Reeves, and forced nearby homes to be evacuated.

"I'm the fifth generation to run this place," said owner Graham Reeves, 52. "I have two daughters. They would have been the sixth."

"No one's stolen anything," he said. "They just burnt it down."

NPR's Philip Reeves contributed to this report, which contains material from The Associated Press