Accessibility links
Assateague's Wild Horses Get Too Close To Company The famed beach-dwelling animals are visited by around 2 million tourists per year — and they've picked up some bad habits because of it. The horses will poke their heads into cars or unzip tents hunting for junk food. And tourists who enjoy seeing them up close forget they're wild animals, park rangers say. 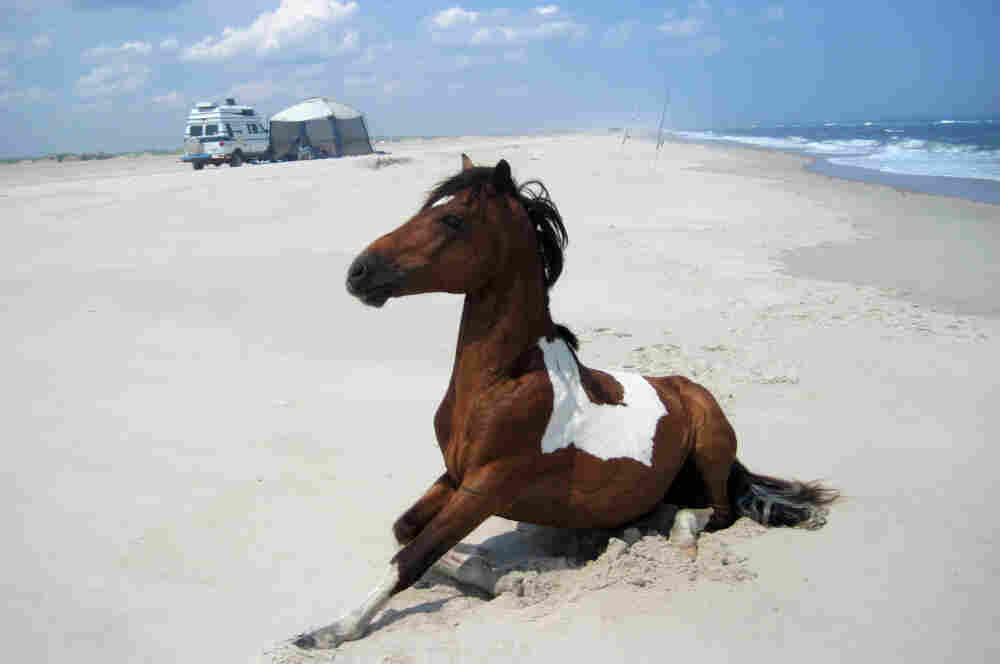 A wild horse roams on the beach without regard to campers at Assateague Island National Seashore, Maryland. Kristen Wyatt/AP hide caption 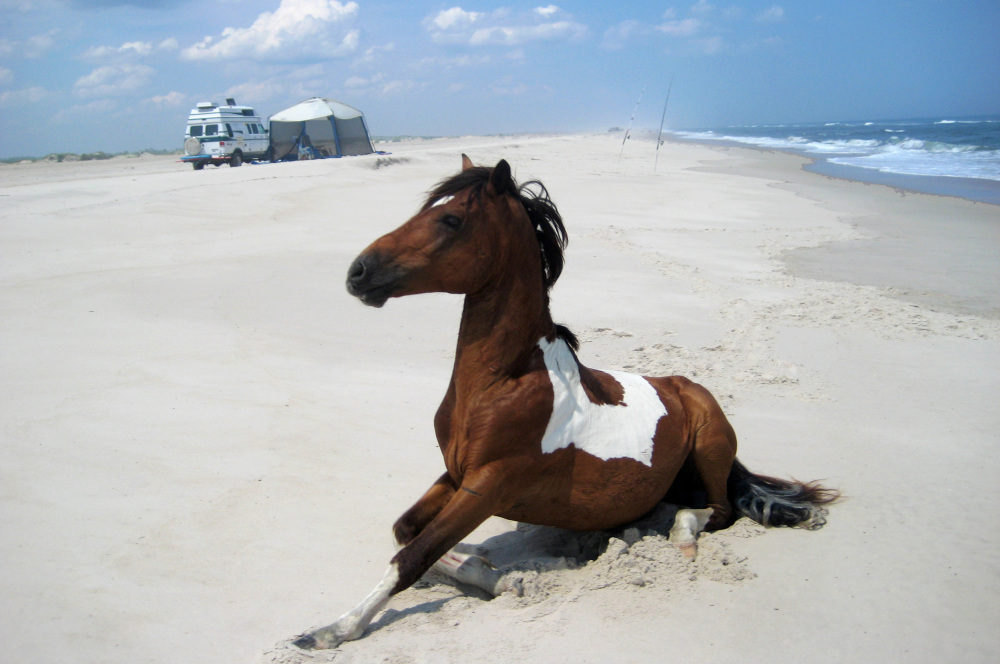 A wild horse roams on the beach without regard to campers at Assateague Island National Seashore, Maryland.

The first thing visitors notice about Assateague Island National Seashore is this: The 114 wild horses that inhabit the beachfront park along the Atlantic Ocean have full run of the place.

Summer is peak season for some 2 million tourists who visit Maryland's Assateague Island, famed for those wild horses. But increased interaction between man and beast is causing problems with the horses' diets and behaviors.

A Taste For Junk Food

It's striking just how close the stunning wild horses get to visitors, whether it's a chestnut mare chomping grass near a roadway, or a stallion and several mares trotting near a campground filled with RVs.

Ranger Allison Turner of the National Park Service monitors the herd, and says the horses are not afraid of people.

"And they can become curious about them or they may — if they smell the food — they may go investigate," she says. "They can learn that it's easy access to food."

Tammy McAdoo, visiting from Arkansas, says a horse came right up to the edge of a nearby picnic table.

Horses are typically herbivores. But thanks to visitors who pet and feed them, park volunteer Pam Stansell says they've developed a taste for things like junk food.

The horses can become aggressive when they want grub. They block roadways, poke their heads into cars and even use their teeth to unzip tents.

"There were two ponies in one of those tents with the food, and just [took] it to task," Stansell says.

Couldn't Drag Them Away

Stansell is part of Assateague Island's Pony Patrol. The volunteers ensure that the public enjoys the horses — at a safe distance.

Pony Patroller JoAnn Donovan explains that this is because "if [the horses] do buck or make a sudden movement, you're not gonna be trampled."

Good advice, but Stansell says many parents ignore it.

"A lot of them like to put their child on the ponies, if they could, to have a photo-op," she says. "They don't recognize that these ponies really are wild."

Some horses have also become so acclimated to people that they stand on park roads seeking handouts. On average, one horse per year dies at Assateague after being struck by a vehicle.

To address these issues, park officials recently instituted new rules: Visitors must secure food and trash, and remain at least 10 feet away from the horses. Violators risk a $100 dollar fine — and maybe a swift kick.