Accessibility links
Atlanta's Schools Work Through Cheating Scandal Students in Atlanta's troubled public school system started classes this week. It follows a year of controversy after dozens of administrators and teachers were found to have cheated on state tests so that students would appear to have made academic gains. 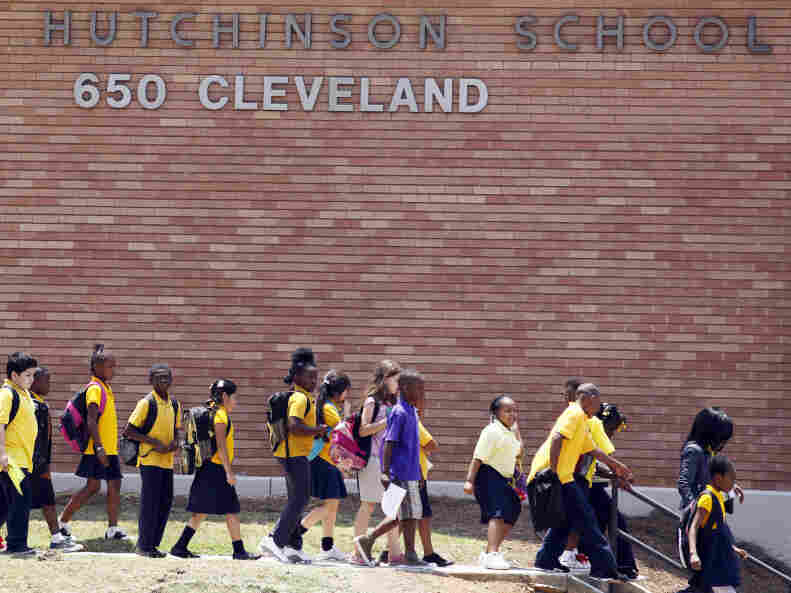 Students leave after the day's classes at Emma Hutchinson School, which has been identified as one of 44 schools involved in a test cheating scandal. Investigators have concluded that nearly half the city's schools allowed cheating to go unchecked for as long as a decade, beginning in 2001. John Bazemore/AP hide caption 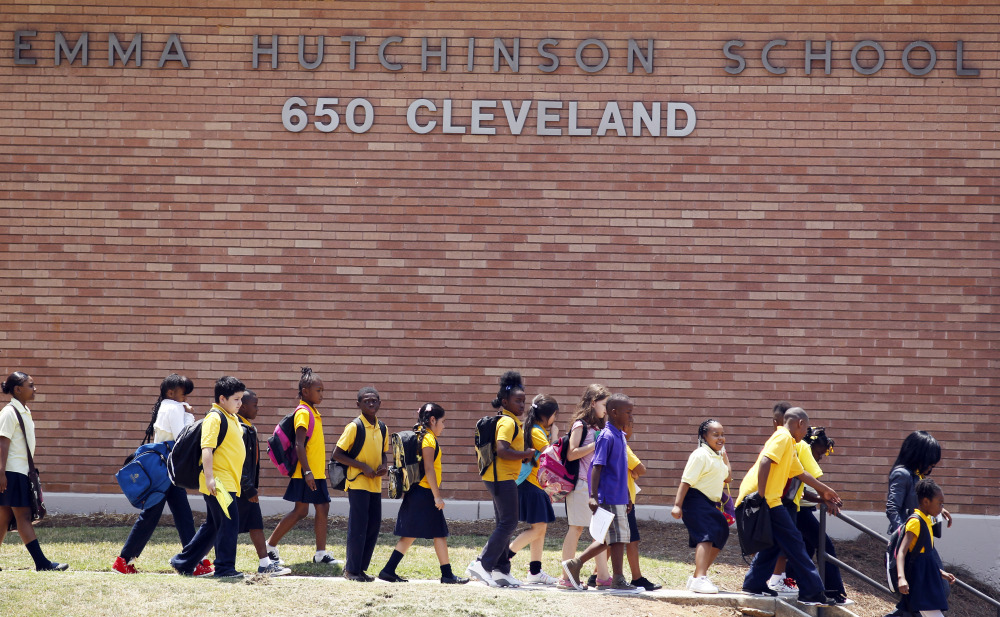 Students leave after the day's classes at Emma Hutchinson School, which has been identified as one of 44 schools involved in a test cheating scandal. Investigators have concluded that nearly half the city's schools allowed cheating to go unchecked for as long as a decade, beginning in 2001.

About 48,000 students headed back to school this week in the Atlanta Public Schools and there's a lot of work ahead — not just for the students, but for the whole district. It's recovering from a scandal that involved widespread cheating on student tests. Nearly 200 teachers and staff have been implicated at about half of the district's schools.

The district downplayed reports that showed a huge number of incorrect answers on student achievement tests were changed, so state investigators got involved. Just last month, Governor Nathan Deal released a 400-page report that detailed unethical behavior, and a climate of fear and intimidation.

"The report's findings are troubling, but I am encouraged that this investigation will bring closure to the problems that existed in the Atlanta Public Schools and restore the focus on students and the classroom," Gov. Deal said at a press conference.

Investigators found that some teachers organized test changing parties. In one school, a teacher used a razor blade to open the plastic wrapping that covered the tests, copied them for each grade, then resealed the books using a lighter to melt the plastic.

Some administrators were found to have worn gloves when they changed answers so they would not leave fingerprints. There were bonuses if students performed well and humiliation for teachers whose pupils did not.

But as school began this week, many were hoping to move on.

Princess Watts stands in front of her fifth grade class at Burgess Peterson Academy in east Atlanta. She passes out the first tests of the year to gauge how much students have retained.

"As you know I'll be teaching math and science," Watts tells her students. "However, I know how it is over the summer that you can forget some of the information that you learned, but I do want you to put forth your very best effort, okay?"

This is not one of the schools implicated in the Atlanta cheating scandal, but Watts says people still ask her what's going on.

"There is a cloud, a dark cloud over the APS school system, but my principal has done a great job of trying to keep everyone lifted," she says.

Watts is passionate about teaching in this mostly minority district, and she says it's hard for her to believe so many teachers, principals and administrators cheated.

"I guess maybe I'm in this little bubble, and you think everyone is like you and here to do their job and truly just educate the children. It's sad situation. but here [at Burgess Peterson Academy], I don't feel that way.

Parents, too, are trying to move past the scandal.

"The kids are suffering. Us grown folks, well we suffered a little bit, but they are suffering more," says Eva Stokes, who has two grandchildren in the schools. Stokes thinks there should be consequences for those who cheated.

"Something should be done with them, because the kids that they passed on — they don't know anything," she says. "They don't know what they're supposed to know in order to achieve what they need to achieve. So they should pay for it."

Atlanta is not the only place where cheating has occurred. Schools in Washington, D.C., Philadelphia and LA are among those grappling with their own scandals.

"It really ought to drive us to a greater reflection on how we examine student performance," says Edward Queen with Emory University's Center for Ethics.

Queen says it's clear in many districts, raising tests scores is the only thing that matters.

None of those named in the Atlanta cheating scandal is still working in the schools. District attorneys are now considering whether to file criminal charges.

And the school district is facing another test: The board has been given until next month to figure out how to improve its leadership, or the district could lose its accreditation.