Accessibility links
Aid Groups Race Against Time In Somalia Aid groups say they are making progress in delivering food to Somalia. But the need is critical and growing as the death toll continues to mount. 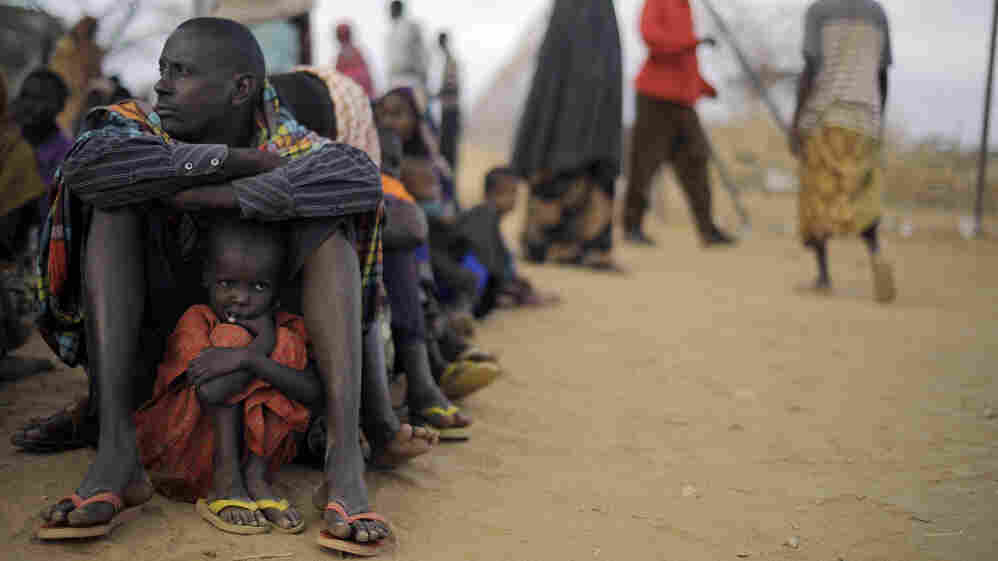 A Somali father sits with his daughter at the head of the line at a refugee camp registration center in Dabaab in northeastern Kenya, Aug. 2, 2011. International aid agencies are struggling to bring in more supplies to drought-stricken Somalia and neighboring Kenya. Tony Karumba/AFP/Getty Images hide caption

As aid groups battle the famine in the Horn of Africa, the news is mixed. More food is getting through and security has improved for now, but tens of thousands of children have already died and many more are at risk.

Aid group were pleased last week when al-Shabaab, which the U.S. considers a terrorist organization, pulled out of the capital, Mogadishu. That made a dangerous country a little bit less so for aid workers.

"It's too early to tell whether it is a good and lasting sign, but it does offer the possibility of getting more assistance in through Mogadishu," said Gayle Smith, a top White House official.

The move comes at a time when Somalis are rushing into the city from outlying areas. United Nations officials say that 100,000 Somalis have flooded Mogadishu in search of food and shelter. Valerie Amos, who runs the U.N.'s Office for the Coordination of Humanitarian Affairs, says U.N. agencies are providing help, but are moving in cautiously.

"The refugee agency managed to get three plane loads of supplies into Mogadishu in the last few days because we urgently needed supplies of tents," said Amos. "We've had food deliveries in Mogadishu, so all of this has been happening. But I do think it is important that we all remember that there are still 2.2 million people in the south and center who require aid and support."

Al-Shabaab controls south and central Somalia and those are the areas worst hit by the famine. The U.S. government recently agreed to ease its restrictions on private American relief groups that want to deliver supplies to parts of Somalia run by the Islamist militant group.

Donald Steinberg of the U.S. Agency for International Development says the U.S. government won't prosecute aid groups if some aid inadvertently falls into the hands of al-Shabaab. "When you move food in, there are going to be, we understand, the possibilities for diversion." 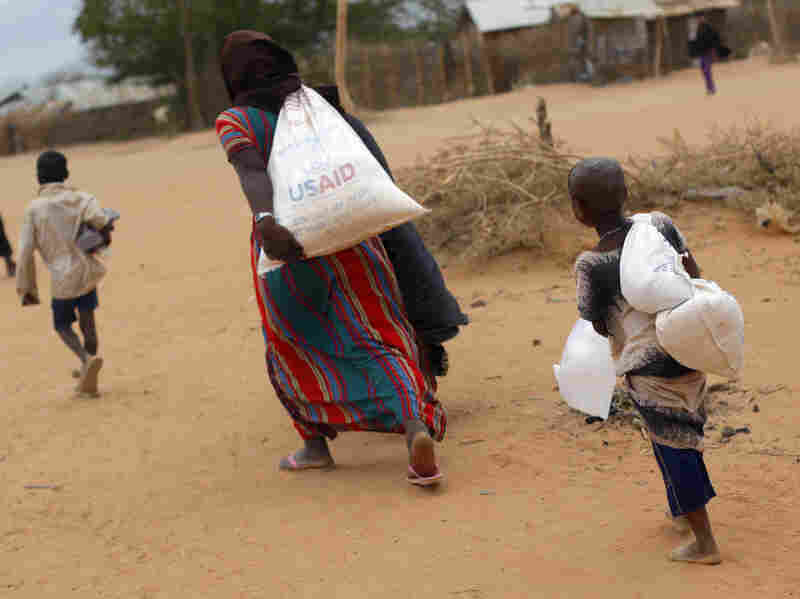 A Somali family carries their supply of food aid as they arrive at a refugee camp outside Dadaab in northeastern Kenya along the Somali border, Aug. 5, 2011. Jerome Delay/AP hide caption

Private relief groups lobbied hard for that sort of flexibility and are still trying to make sure these new regulations cover everyone bringing emergency relief supplies to Somalia.

Aid groups have also faced challenges raising money and awareness about the crisis in the region, which has also hit Ethiopia and Kenya. Sam Worthington, who runs InterAction, an umbrella organization of 190 humanitarian groups said the response to the drought has been disappointing.

"Hunger is a silent killer," he said. "It results in a child withering away. It is not as dramatic as a tsunami or an earthquake and as a result it is a harder message to get to the American public."

Congress, meanwhile, is focused mainly on budget cuts these days, including foreign assistance programs. Donald Steinberg, of the U.S. aid agency, says this year the government has given more than 500 million dollars in aid for the Horn of Africa, but these funds could soon dry up.

"If we do see the kinds of cuts in food assistance that are identified in the emerging legislation in Congress, it will have a significant impact," he said.

Most aid experts fear that the worst is yet to come in the drought ravaging Somalia and its neighbors.