Accessibility links
New Police Scanner Raises 'Facial Profiling' Concerns Using an iPhone attachment, police can scan suspects' irises, faces or fingerprints and compare them against a database to verify their identity. Police around the nation will receive the scanner starting in September, but the technology has some privacy advocates worried. 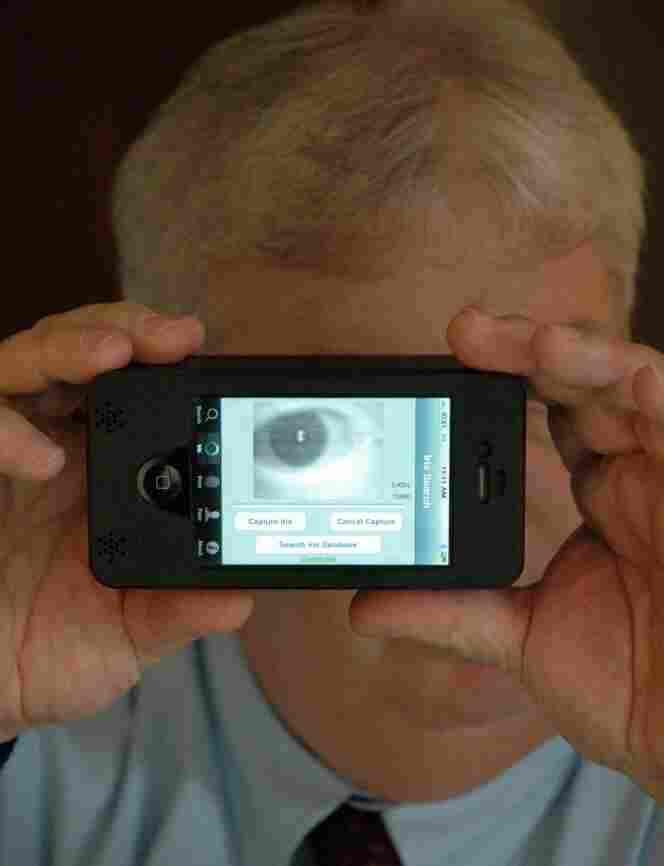 Sean Mullin, CEO of BI2 Technologies, scans his own eye with the MORIS, or Mobile Offender Recognition and Information System. The device attaches to an iPhone and allows police in the field to scan a person's iris, face or fingerprint and then check it against a database to verify his or her identity. Tovia Smith/NPR hide caption 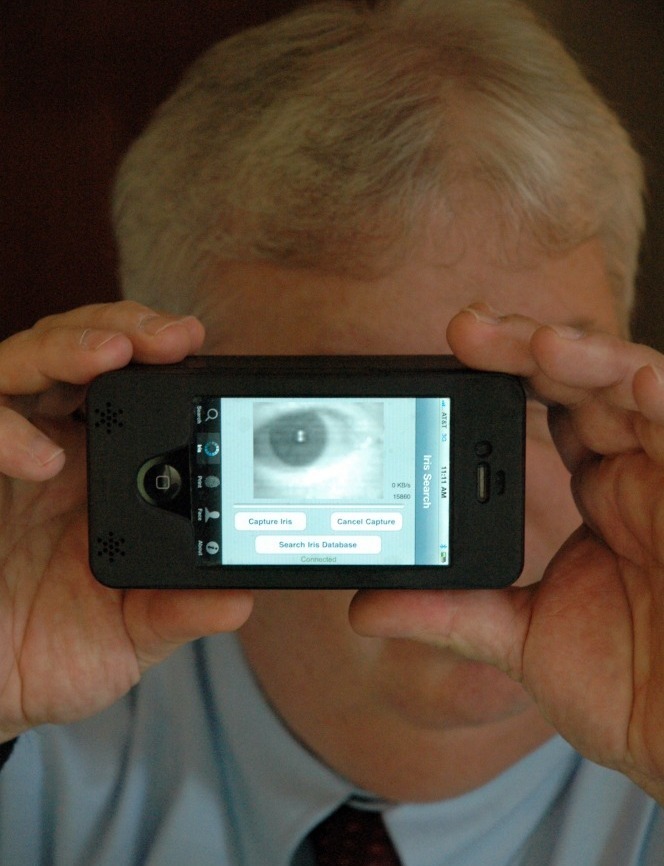 Sean Mullin, CEO of BI2 Technologies, scans his own eye with the MORIS, or Mobile Offender Recognition and Information System. The device attaches to an iPhone and allows police in the field to scan a person's iris, face or fingerprint and then check it against a database to verify his or her identity.

Beginning this fall, police officers across the nation will have a new weapon holstered onto their belts: A small attachment that weighs about 12 ounces turns an ordinary iPhone into a state-of-the-art biometric scanner.

The device allows officers to scan a suspect's irises or face, or his fingerprints, and instantly identify him. That capability is raising concerns with privacy advocates

The Mobile Offender Recognition and Information System, or MORIS, does not save the photo, but it keeps it just long enough to determine whether the suspect's iris, which is more unique than a fingerprint, matches any in a national database of people who have been arrested before.

"I pushed people aside to be first in line to get these!" he says. "It's worth its weight in gold."

About 40 counties around the nation are set to receive about 1,000 of the devices beginning in September. Babeu says the gadgets will keep officers from getting fooled by criminals who are using increasingly high-quality fake IDs.

Currently, if an officer is suspicious that someone is using an alias, he can bring the suspect in for fingerprinting. But that sometimes means a long drive to the station, and then it could take anywhere from a day to a week to hear back from the FBI whether the fingerprints match.

"Sometimes I would arrest people, and they may have a false document," Babeu says, "but I don't find out until the next day, when there is an alert on my email that says, 'Hey, guess what! It was really this other person!' But they've already seen a judge and they're released."

The iris-scanning device, on the other hand, is instant. It's only as good as its database, though. And while the database for fingerprints is enormous, the number of iris scans on file right now is still relatively small — but growing.

Around the nation, law enforcement officials have begun routinely taking an iris scan on every suspect — or convict — who goes through booking at the local lockup. That not only helps build the database, but it also helps identify offenders using aliases.

Lt. Doug Rideout, a booking officer at the Plymouth County Correctional Facility in Massachusetts, says he can recall more than one inmate who was busted for pretending to be someone else. For example, one suspect who came in recently with an alias had fooled police and even the courts. When he came for booking, however, he was asked to look into a binocular-like device to scan his irises.

"We do the iris scan, and it pops up his picture. We turn the screen around and say, 'This is you, right?' And he still denied it," Rideout says. "But we knew it was him. There was no way around it."

The technology has left law enforcement almost giddy with excitement, but many others are concerned that it will be used to violate the privacy of law-abiding citizens. Jay Stanley, a senior policy analyst with the American Civil Liberties Union, worries the hand-held devices will be overused by police in a new kind of "facial profiling."

"What we don't want is — because the technology is so easy to use — that the police begin using it left and right on all kinds of people who just strike them as looking funny or out of place, based on the faintest whiff of a suspicion," he says.

There is also concern about who manages the data and who can access it, as well as what happens if it gets in the hands of someone other than law enforcement.

George Washington University Law School professor John Banzhaf says he worries especially about facial-recognition technology. Images can be snapped from far away, covertly, and matching software is already so ubiquitous, it's even on Facebook. That means you could be easily tracked by anyone, from an ex-boyfriend to a department store employee.

"I don't know of anybody who would want to walk around with [what is essentially] a computer cookie on their face so that everywhere they go, you can be photographed and then somebody can track you. That's frightening," Banzhaf says.

The law has yet to catch up with the new technology. Until now, police use of facial recognition has been limited more by technological considerations than legal ones. For example, police in Florida quit scanning crowds at football games because it ultimately proved ineffective.

'A Difficult Balance To Strike'

Things are changing fast, however, and as technology improves, experts say, new safeguards will be needed. For example, privacy advocates worry what will happen when it becomes possible to scan an iris from a distance, without the target knowing. They say iris scanning ought to be considered a "search," and police should be required to get a warrant before taking a scan.

But Sheriff Joseph McDonald in Plymouth County, Mass., says that's not necessary. As he sees it, iris scanning is a lot like fingerprinting. Officers don't need a warrant, but they also can't — and won't — just do it indiscriminately, he says.

"Officers aren't going to be walking around with these machines, stopping people on the street who happen to be walking by, without reason to stop these people," McDonald says. "We've got 240 years of constitutional law that isn't going away. It's a difficult balance to strike, but I think we're pretty good at it."

There is perhaps no one who understands the great upside of facial-recognition systems better than authorities at the Plymouth County facility — the very prison where former mob boss James "Whitey" Bulger is now locked up after 16 years of hiding, in what turns out to have been plain sight.

It's easy to imagine how authorities might have found Bulger much sooner than they did with the help of facial-recognition technology.